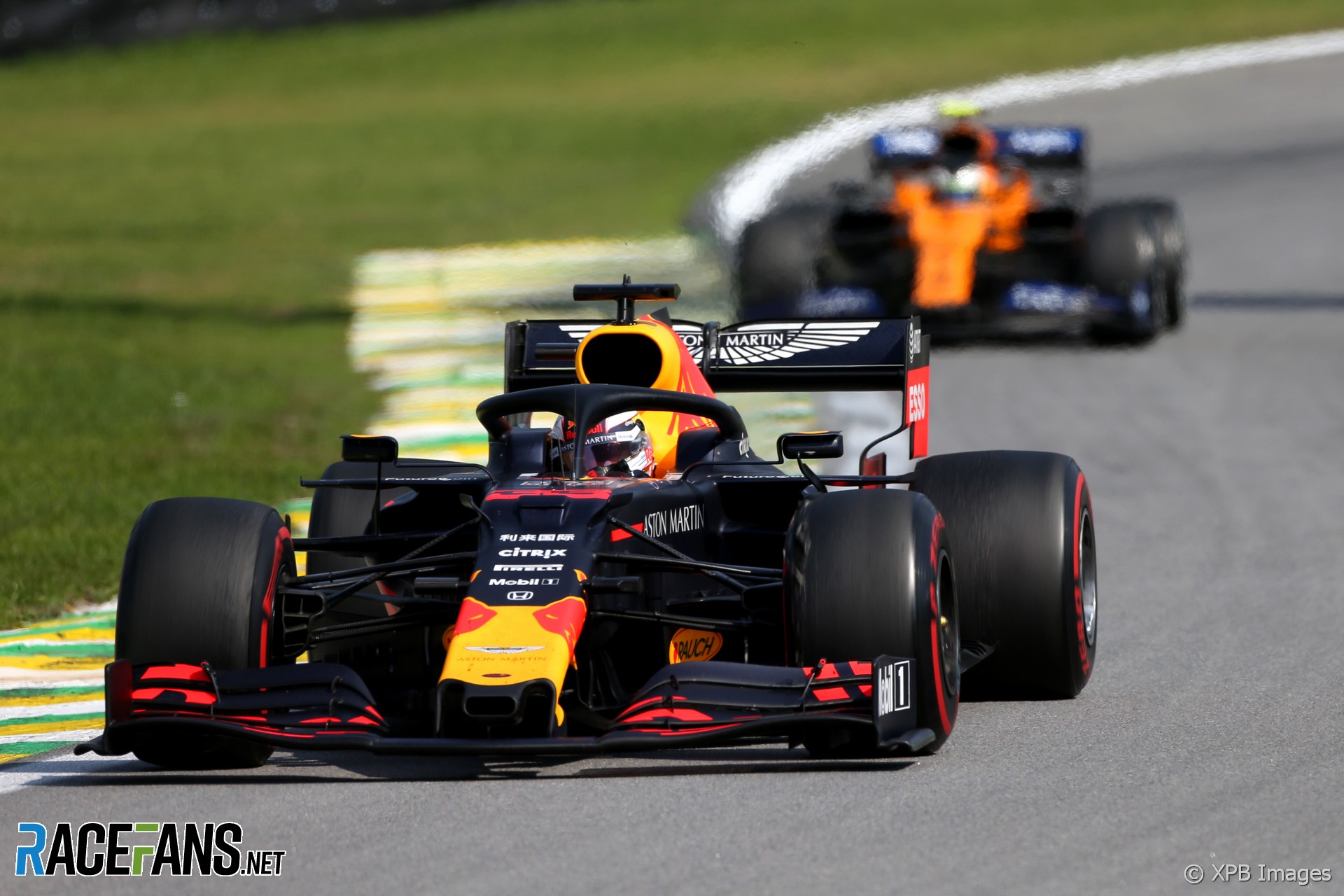 Verstappen beat Sebastian Vettel to pole position by a mere tenth of second and held his lead at the start of the race, but couldn’t break away from Lewis Hamilton, who moved up to second. Despite a world record-setting pit stop, Verstappen lost the lead when Hamilton pitted before him, thanks to a near-miss with Robert Kubica in the pit lane.

But within a lap the determined Verstappen has caught and passed Hamilton on the inside at turn one to retake the net lead race. His strong pace in the second stint meant he was safe from Mercedes’ second attempt to undercut him.

That might have been it, but then came the Safety Cars. The Red Bull pit wall boldly called Verstappen in after the first one, surrendering his lead, though again he immediately used the fresh rubber to his advantage and retook the lead from Hamilton, this time around the outside through turn one. With his track position advantage restored, Verstappen redeemed his loss in Brazil last year with his third win of the season.

An engine problem in qualifying meant Sainz had to start from the back of the grid. McLaren took advantage of that, fitting a fresh engine. On lap one, he made up two positions and sliced his way through the field, all the way up to seventh before switching from soft to medium tyres. He managed to make that set of medium tyres last 42 laps, and held off Kimi Raikkonen brilliantly on both restarts to cross the line in fourth. Hamilton penalty meant Sainz subsequently inherited the first podium of his career.

Gasly qualified ‘best of the rest’ by a hundredth of a second over Romain Grosjean, and comfortably led the midfield during the opening phase of the race. His strong pace meant he was never troubled by midfield drivers behind, but he also couldn’t close the gap to the front-runners until the first Safety Car period brought the whole field together.

After Bottas and the two Ferraris retired he was running third, but it only took one corner for Hamilton to blow by in a far superior car. One lap later, Albon and Hamilton collided and Gasly leaped into second place. He was able to hold off Hamilton up the hill and keep half a car length ahead as they crossed the finish line.

While his team mate qualified best of the rest in Q3, Kvyat couldn’t even make it out of Q1 and started 16th. He lapped nearly a second slower for the majority of the race and despite the carnage and opportunities presented thanks to the two Safety Cars, couldn’t find his way into the top 10 until Albon was knocked into a spin and fell down the order.

The Circuit of the Americas winner had a very low-key weekend in Brazil. After being out-qualified by his team mate, Bottas was unable to get within striking distance of Vettel while Hamilton battled Verstappen for the win. He attempt a one-stop strategy, but Mercedes abandoned that early in his second stint due to the threat of Albon.

Bottas was trying vainly to pass Leclerc after his second stop when an engine problem brought an early end to a lacklustre race.

Hamilton made a fantastic start and temporarily jumped ahead of Verstappen, but was defenceless when the Red Bull driver repassed him for the lead as his battery had already been drained by a hard out-lap. Mercedes left him out during the first Safety Car period on old tyres to take the lead, but again it was immediately lost to the fresh-tyred Verstappen. A final gamble on an extra pit stop during the final Safety Car backfired: he tagged Albon while trying to pass and received a five-second penalty, dropping him to seventh. It also robbed Albon of his first podium finish.

Leclerc quickly made his way through the field after receiving a 10-place grid penalty for an engine change, while Vettel lost out to Hamilton from the first row. The first Safety Car brought the Ferrari drivers together, and the ensuing battle led to an avoidable collision which put both drivers out of the race.

Raikkonen was the quicker of the Alfa Romeo drivers all weekend, though Giovinazzi ran him close, and once the dust had settled they emerged in a surprising fourth and fifth, by far the team’s best result of the year.

Daniel Ricciardo bounced back to seventh after a clumsy collision with Kevin Magnussen for which he received a five-second penalty. Both Haas drivers found pace in qualifying and advanced to Q3, but in the race they lacked pace and couldn’t hold on to a position in the points.

Lando Norris was another driver who regretted switching to hard tyres. He let his team mate go by and plugged away to take eighth place. Perez outclassed Stroll all weekend as usual, and lucked into ninth thanks to the retirements at the front of the field, complaining about poor straight-line speed in his Racing Point.

Russell lost out to Kubica at the start but bounced back to finish 12th. Kubica’s penalty for an unsafe release into Verstappen meant he finished last. Meanwhile, Hulkenberg was unable to capitalise on the two Safety Car periods since he overtook Magnussen before the Safety Car line and received a five-second penalty.