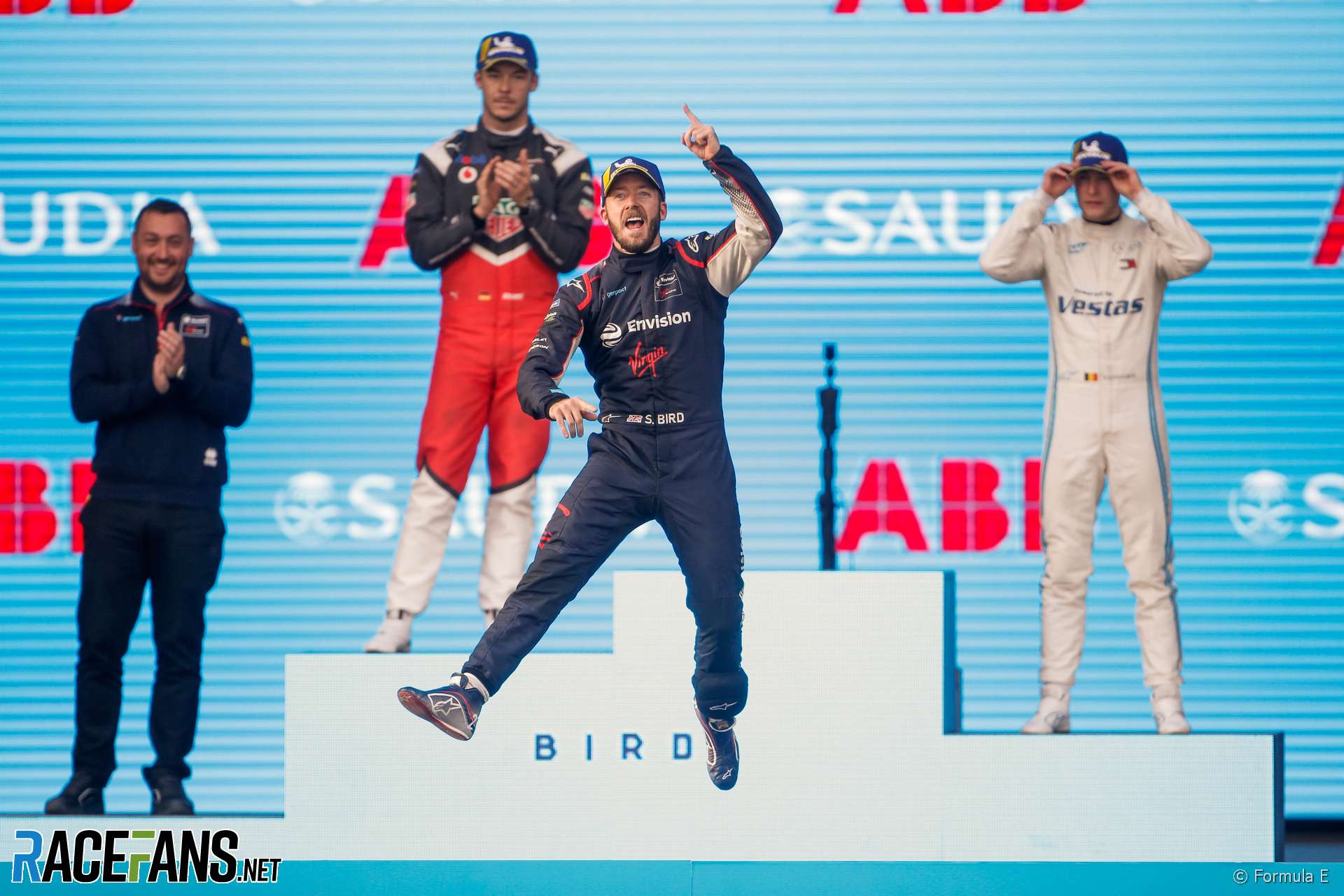 Sam Bird and Virgin repeated their season-opening win of two years ago by rising from fifth to first in the curtain-raising race at Diriyah. He was chased home by Andre Lotterer and Stoffel Vandoorne, who ensured championship newcomers Porsche and Mercedes respectively took podium finishes on their debuts.

BMW Andretti’s Alexander Sims led the field away from pole position, pursued by the Mercedes of Vandoorne and De Vries, followed by the duelling Edoardo as Mortara and Bird. That fight allowed the top three to establish a small lead, two-and-a-half seconds separating third and fourth after five minutes of racing.

Sebastien Buemi the stopped at turn 12, close enough to an escape that it only brought out local yellow flags and avoid a Safety Car. With Nico Mueller not starting following a crash in qualifying, that left 22 cars running.

Rowland was the first driver to activate Attack Mode, at 36 minutes. He lost a modest 1.6 seconds to Maxi Guenther in ninth but in running off line, hit the extremely dusty side of the track. That left him with filthy tyres which prevented him making the most of his power boost.

Mortara and Bird were still racing closely at 32 minutes remaining but had caught the top three, letting Mortara get too close to De Vries for a moment and lock up off line. Bird minimised the damage by activating Attack Mode, but then had to wait for a drag race on the straight and another error from Mortara to first reclaim fifth from Jerome D’Ambrosio and then hunt down fourth.

Sims had built a two-and-a-half second gap to Vandoorne by 30 minutes, letting him activate Attack Mode safely for the first time but the pack remained close throughout the mid-race.

Jean-Eric Vergne’s championship defence did not begin well. He pitted with 17 minutes remaining and retire. Meanwhile his former team mate Lotterer had moved up to fifth and started advancing on the podium positions, his Porsche carrying a 1% energy advantage over his rivals.

After a tense first half-hour, the front of the field came to life. Bird attacked Vandoorne, but the Mercedes driver covered him off then braked so late he forced Sims wide. Vandoorne and Sims passed the BMW Andretti man, but as Vandoorne still had to make use of the Attack Mode, Bird was assured a clear shot at the lead.

De Vries subsequently slipped down the pack, letting Lotterer move up once again and with thirteen minutes to go Vandoorne was clinging to the lead with Bird and Lotterer immediately behind him.

With 10 minutes remaining and a slight energy advantage, Bird was able to overtake Vandoorne for the lead – and leave the Mercedes to the clutches of Lotterer’s Porsche, still needing to make the diversion to activate Attack Mode one more time.

Suddenly, Daniel Abt was jackknifed across the track, hitting the wall after already sustaining front wing damage and bringing out the safety car in the last gasp of the race. Under a new rule for this season drivers are deducted 1kWh of usable energy for every minute the Safety Car is out. That reduced each drivers’ available total by 4kWh.

Bird made a superb restart and control the remainder of the race while Lotterer was left fighting hard to repel Vandoorne’s attempt to reclaim second. They finished in that order, with Lotterer giving Porsche a second-place finish on their Formula E debut and Vandoorne third for fellow debutants Mercedes.

But with the early signs being that this will be another close title fight and the second race of the season coming up tomorrow, Bird’s early lead in the championship could last as little as 24 hours.