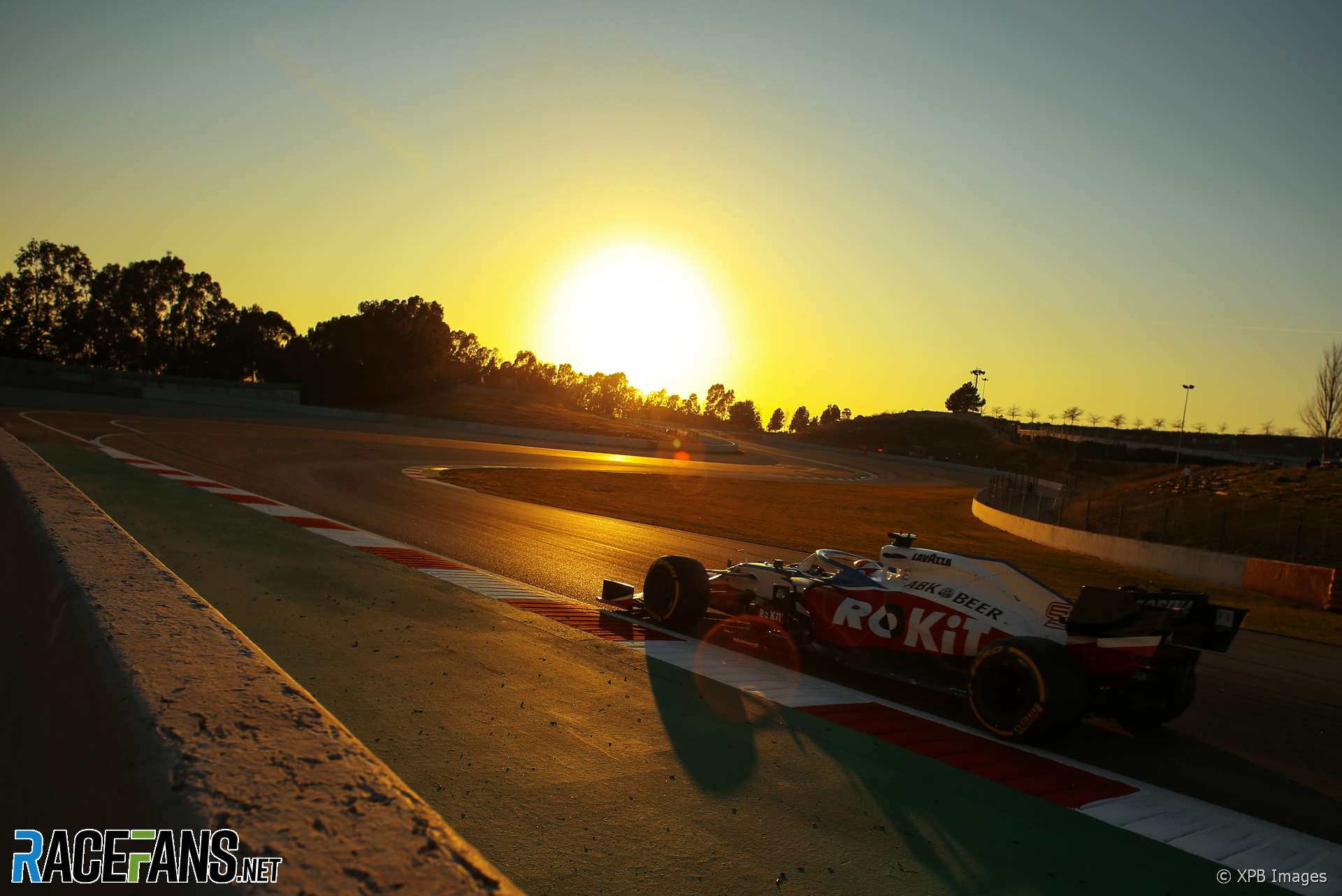 United States president John F Kennedy once said, “In the Chinese language the word ‘crisis’ is composed of two characters: One represents danger and the other represents opportunity.”

Although linguists may debate the accuracy of that famous quote, there is little doubt that today Formula 1 faces a watershed instigated by the Covid-19 Coronavirus, one that represents both an existential danger and a timely opportunity to reinvent itself. The quote brings with it a touch of irony, as the pathogen was originally discovered in China, which was also the first host to “postpone” its grand prix.

In comparison, during the same period NASDAQ Inc, the exchange upon which F1 is listed, fell 20%, proving how sensitive F1 is to Covid-19. It is not alone: Renault market capitalisation dropped 53%, Daimler’s Frankfurt’s listing by 45% and Honda’s by 30%. Significantly, Ferrari’s dropped just 25% during the same period – demonstrating that luxury can be resilient. On the flip-side, Aston Martin fell 57%. Note: these are guideline statistics only.

Market capitalisation – the total value of all a company’s shares – is merely an indicator of a company’s performance and perceptions of its earning potential. There is little doubt the share will rebound as and when F1 and the rest of the world emerges from Covid-19’s shadow. But its recent halving shows how seriously the markets view F1’s uncertain future. Thus, Liberty’s imperative is to talk up the sport’s prospects in the face of the crisis.

On Monday F1 CEO and chairman Chase Carey provided his – overly optimistic to the minds of many – view of the sport’s immediate future, suggesting “racing would resume in the summer” (saliently a four-month window) and there could be 15-18 races during the 2020 season, whenever that may end. What is known is that racing is unlikely to commence before mid-June; probably even later at the current rate of drop-outs.

Carey reiterated that the 2020 chassis would be carried over to 2021, with a potential freeze on development of further components after this year. This was announced last week after a conference call of major players including team principals – save, perversely, Mercedes F1 and Racing Point’s bosses, who sent their lieutenants – plus F1 senior management and FIA officials.

Although not specifically alluded to, it is believed the 2021 sporting regulations – as announced last October and variously “clarified” to teams since – will still apply, being amended only where absolutely necessary to accommodate the largely carried-over technical regulations. This should provide appreciable operational savings, which could prove crucial given the financial disruptions caused by Covid-19.

Significantly the teleconference decided that, “The introduction and implementation of the [new] financial regulations will go ahead as planned in 2021, and discussions remain ongoing between the FIA, Formula 1 and all teams regarding further ways to make significant cost savings.”

Therein lies the silver lining to a very dark cloud on the horizon. Enforcing the so-called “budget cap” during 2021 will ensure that the major teams – Mercedes, Ferrari and, to lesser degree, Red Bull – can no longer throw unlimited resources at the new-generation F1 cars, as would have been the case were they been introduced next year, as originally planned.

For clarity: with the financial regulations only due for introduction in 2021, the FIA and F1 are powerless to invoke restrictions on design and development this year, when some serious spending on new-gen cars was on the agenda ahead of their 2021 introduction. Then came Covid-19, which turned F1 upside-down.

Thus, one of the main fears for F1’s new era, namely that the ‘big three’ would carry their budgetary advantages into 2021 (and beyond given their momentum), has been largely allayed. Why “largely”? Because the new regulations were published at the end of October 2019 as per FIA rules, teams have worked on concepts since, and this trio is known to have allocated considerable resources to their designs.

With the delay confirmed, there is a relatively easy work-around: Technical working group meetings can be held, but no clarifications, updates or technical directives issued until the end of October this year (or even later), putting brakes on development. Of course, some teams may continue to undertake speculative studies, but given the effects of Covid-19 on income, such activities would be sheer folly.

Equally, freezing development, even partially, of existing cars from now through to the end of 2021 should reduce the advantages of front-runners, who generally gain as the season progresses through having year-long spending power. For example, last year Ferrari gained approximately a second per lap – an eon in F1 terms – over powertrain customer Alfa Romeo during the course of the season.

True, the pecking order is unlikely to change much, but racing should ultimately be closer, which has been one of the bugbears of the current formula. Therein lies a negative, if unforeseen, consequence of retaining this year’s cars in 2021: For three years F1 has pointed out the aerodynamic shortcomings of current (inherited) cars and promised fans it would all-change from 2021, then keeps them for another year.

Therefore, it is crucial that every attempt is made to ensure close racing via a development freeze. The flip-side is that teams are unable to develop any recalcitrant cars out of trouble. Hence the suggestion from a rival that Ferrari’s chassis cannot lack speed despite comments to the contrary during pre-season tests, or the Scuderia would surely not have agreed to a freeze.

The rules change may play against the ‘clone car’ teams. Carrying over chassis and restrictions could ‘freeze’ out any advantages, perceived or actual, enjoyed by such as Haas, Racing Point and AlphaTauri, whose cars bear obvious resemblances to Ferrari, Mercedes and Red Bull designs respectively, whether based due to openly acquired technology, copied design, or parts sharing – in that order.

How so? ‘Clone’ teams rely on previous year’s designs and technologies from their respective ‘mother teams’, so by 2021 their chassis will effectively be two years old rather than one, and thus are likely to have less development potential. That should further close up the midfield, though perhaps not enough to meet the expectations of fans.

Unchanged in all this is the deadline to extend F1’s commercial agreements, which expire this year. They are to be replaced by the (yet-to-signed) 2021-25 Concorde Agreement which provides for an all-inclusive governance structure giving equal voting powers to all teams – except Ferrari, which inexplicably retains its veto – plus a more equitable revenue structure.

Although this structure is far from optimal, it at least provides independents with a fighting chance. It will continued to pay (reduced) bonuses to the major teams, but crucially all competitors will qualify for a bonus payment subject to current performance, not purely on their historic value.

Where there were fears that the negotiation process, already well advanced but with a few sticking points mostly raised by the majors, would be relegated to the backburner once the season got under way, now that shutdown is imminent and most forms of travel banned, the sport’s main players have absolutely no excuses for not getting the process sorted before racing resumes.

Given the upheaval across the world, a strong case can be made that budgets should be cut from $175 million to maximum $125m, being an adjustment for the reduced team income, whether from Liberty, sponsors or partners and/or drivers, as the economic realities of Covid-19 hit every aspect of F1, from race through TV contracts to advertisers, gate income and state subsidies. Any wonder FWONK is down 50%?

In fact, even $125m could be considered generous: Teams are restricted in terms of engine, gearboxes, tyre usage, aerodynamic/CFD runs and race crew numbers, while costs are already capped for engines. These restrictions will be further tightened from 2021. Thus, the actual costs of designing, building and racing two cars during a season are largely the same, whether for Ferrari, Renault or Williams.

The rest is development (increasingly restricted), driver salaries – think Lewis Hamilton’s reputed $50m annual stipend – and fancy gizmos such as DAS, which serve only to confer (by admittedly ingenious means) a performance advantage on one team until the development is banned.

So why keep a $175m cap in these uncertain times? The original figure was agreed as a sop to the majors, who would otherwise need to downsize massively – but tough times call for tough decisions, and F1 faces arguably the toughest time in its 70-year existence. Folk point to the 1955 Le Mans disaster in which Pierre Levegh’s Mercedes was launched into a crowd, killing over 80 spectators, and prompting widespread calls for a ban on motorsport. Then as now, the sport faces an existential threat.

Where pre-Covid-19 at least two teams were on F1’s endangered list, that number is growing and will continue to do so unless F1 acts fast. Failing that, the sport could eventually find itself down to two or three teams: Ferrari, Mercedes and possibly Red Bull. Throw in the odd clone and F1 has six teams maximum (12 cars) – the minimum for a championship, and 25% down on contractual guarantees of 16.

Three weeks ago Mercedes F1 outlined its sustainability plans, with commercial sustainability being at the heart of the programme and the $175m cap much-trumpeted. If “a week is a long time in politics” – tomorrow another famous political quote – it is an age in the present situation. One wonders how the Daimler board now feels about the budgets of F1 – average $10m per weekend for two cars – as team partners downsize or exit and car markets shrink.

Reducing budget caps to real-world levels and waiving that ridiculous $200m ‘anti-dilution’ payment for new teams (regardless of how it is soft-soaped, it is included in draft contracts) will ensure F1 attracts new teams, in turn adding to the spectacle and ensuring a healthy, sustainable sport. All the more reason, then, to review Concorde clauses during F1’s current idle time.

Now more than ever before, F1 needs new teams and should do everything in its power to encourage, rather than shun them. The regulatory delay provides them with an additional year to prepare while a reduced cap should provide the kind of sustainability recent additions to the champion – Haas excluded – lacked.

Although there was defiance during pre-season testing about mooted plans to ban hospitality ‘palaces’, these too look unsustainable in the new world. As F1 budgets are reduced, so will marketing and hospitality expenditure. How can F1 teams justify sending up to 20 trucks each across Europe every fortnight between May and September simply to provide a temporary base for teams (and dwindling numbers of guests)?

Covid-19 will extract a price from F1 whether it likes it or not. All organisations face the urgent need to adapt. Those that do will emerge stronger and better equipped to face future challenges and one can only hope that F1 counts itself amongst those entities.

The first signs of welcome change came last week with the announcement that teams had waived their rights to approval of changes to the calendar, effectively permitting Liberty to act as it sees best in the interests of F1 (and its income); the second with news that teams are prepared to co-operate on ventilator projects – proving that teams can unite for the common good and staff can be deployed elsewhere as budget caps bite.

Do not be surprised if Liberty (in conjunction with the FIA) and the teams are currently in discussions over budget cap reductions, and if they aren’t, they certainly should be. Thus a fitter, leaner and more sustainable sport can emerge from the shadows of Covid-19, which will ultimately make all the pain and uncertainty more bearable. Danger or opportunity, the decision needs to be made fast.