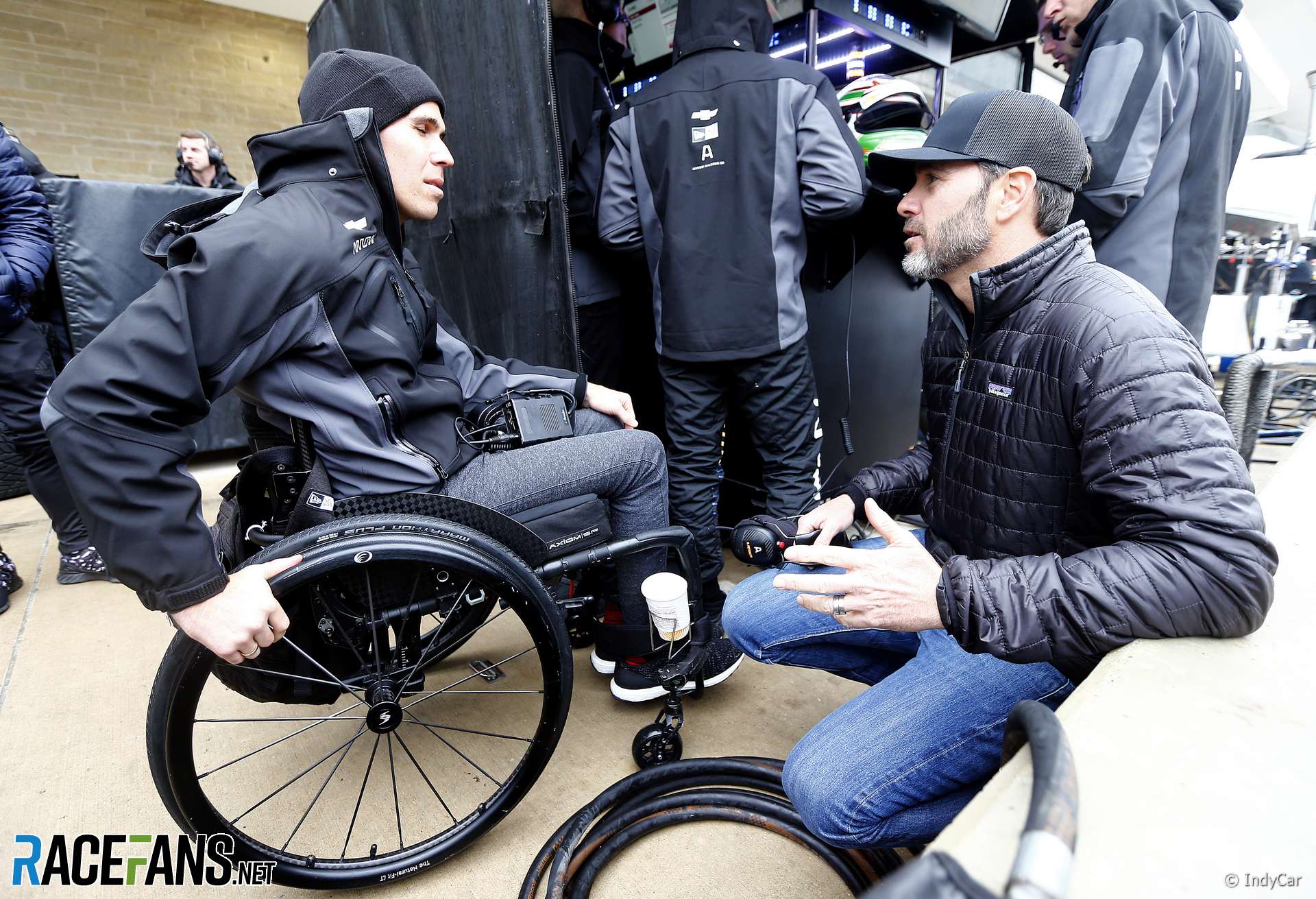 Robert Wickens will rejoin the IndyCar field in the virtual world today for the first time since his career-halting crash at Pocono Raceway in 2018.

The 31-year-old, who suffered a spinal cord injury and paralysis after his car was launched into a debris fence, will join the 29-strong line-up for the Indycar’s iRacing Challenge on the Barber Motorsport Park course.

Wickens – pictured with NASCAR champion Jimmie Johnson, who will also race today – was due to participate in the first IndyCar iRacing round on Watkins Glen. But he had to pull out when the company which had offered to supply a simulator for him withdrew their support.

His new simulator arrived yesterday. “It’s very early days,” said Wickens in an IndyCar press conference on Friday. “The sim finally was set up by SimCraft, finished yesterday at around three o’clock. I was able to put in a couple laps last night for the first time.”

His new rig has been specially adapted to allow him to control the car entirely with his hands.

“It’s weird,” he said. “It’s kind of a mental overload. My brain was exploding from trying to figure out how to use the hand-brakes, to learn the feeling of it and everything. A lot of work to do in a short amount of time. I was hoping I’d pick it up a lot quicker than I am.”

Former F1 driver Max Papis helped to develop a steering wheel for Wickens with hand throttle and brake controls. But the McLaren SP driver suffered another setback when the wheel didn’t arrive in time for it to be installed.

“The courier, I guess, misread the label, they didn’t put it on the truck for the Saturday delivery,” said Wickens. “Instead there’s a whole bunch of confusion, the wheel got sent back to MPI, and I only received it yesterday finally.”

Wickens won’t use the MPI wheel today because of the set-up time involved.

“I only got up and running last night,” he said. “It’s not a quick disconnect, plug-and-play, I need to disconnect, calibrate it. I don’t want to spend half a day trying to get the steering wheel set up and see if I like it more.

“It’s kind of a race against the clock to get competitive for Barber. I’m just going to commit to this system that we put on the sim right now, then after this weekend I’m going to start experimenting with Max’s wheel. Hopefully it’s a better solution than what I have now.

“For example, with the steering angle you need for turn five in Barber, I can’t reach the throttle at the apex. I need some adapting to carry enough entry speed to not lose lap time. It’s all a compromise right now. And until we can develop kind of my own custom steering wheel that suits my exact needs, I’m always going to face those challenges.”

He will stick with a tried-and-tested solution in the meantime. “I just want experience at this point,” he explained. “We were able to figure out another option for a steering wheel for this weekend.

“I’m going to be using a Fanatec McLaren-based steering wheel because it has a clutch paddle. I’ll be using throttle with the clutch. I have a brake lever off to the side I’ll be hand-braking with for short-term until I can get more time to experiment with some other configurations.”

Wickens doesn’t expect a competitive start to his first IndyCar iRacing event. “I can say with pretty big confidence honestly I’m probably not ready for a race just yet. Might as well get thrown in the deep end and see how you get on.

“We’re taking it one step at a time. I know I’m not going to set the world on fire in the race tomorrow. I think the most important thing is to keep the thing running and keep it on track. That’s going to be goal number one for me, hopefully not make too many mistakes.

“So far I can only do about five or six laps without spinning, so there’s a lot of work to be done.”

Despite the setbacks, Wickens is eagerly anticipating his return to racing. “With what’s going on in the world, the current pandemic, the virtual racing, Esports, basically took centre stage and made it all reality very quickly. I guess you could say I’m almost a beneficiary of what’s happening in the world right now.

“I’m grateful for SimCraft, McLaren SP, for making this happen. I’m excited to drive something. Last night was the first time I’ve driven any form of racecar since the accident in Pocono. Even though it was virtual, it still felt pretty good.”