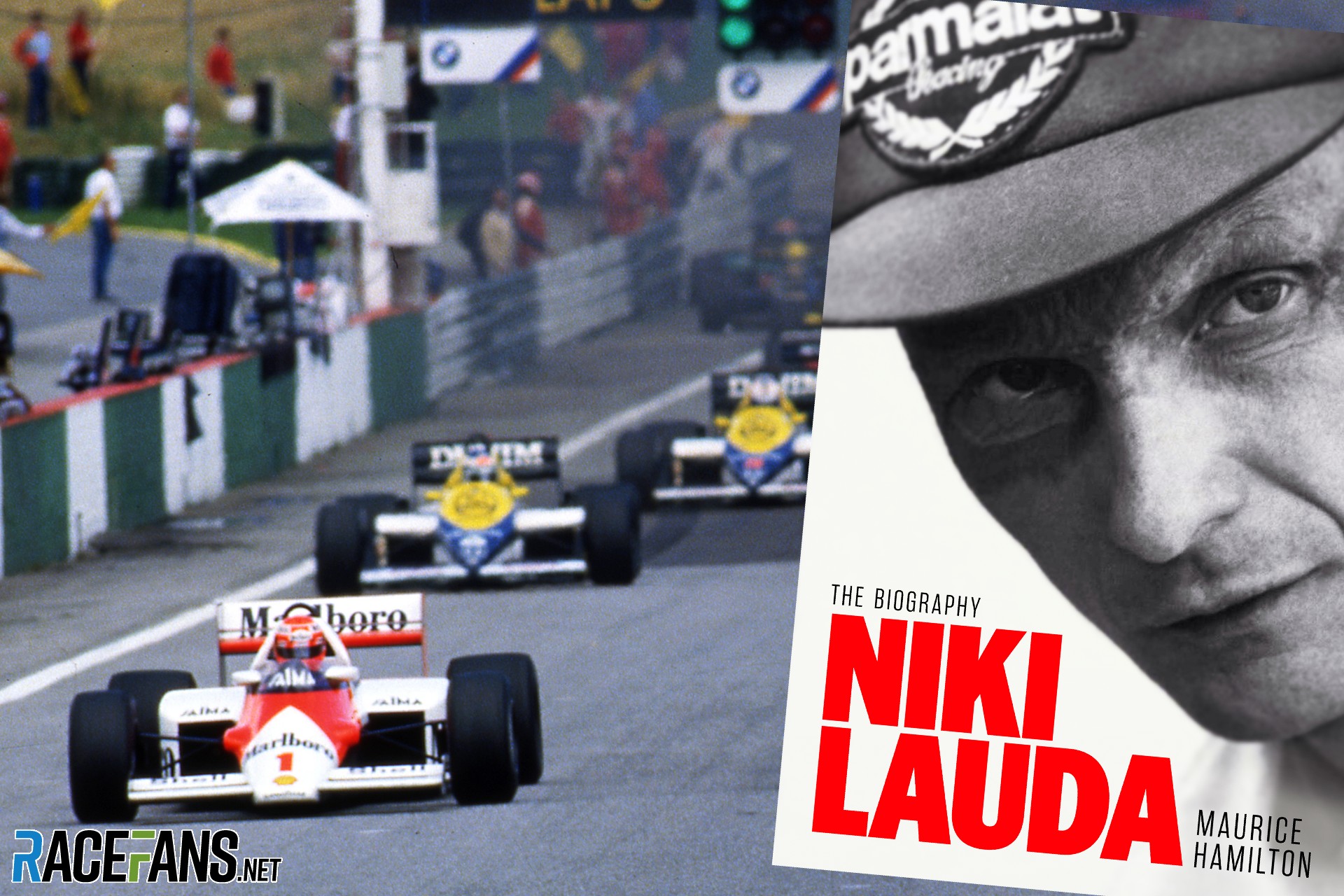 Niki Lauda made his second and final retirement from racing Formula 1 cars 35 years ago.

In this extract from an upcoming new biography of the world champion, who died last year, author Maurice Hamilton recalls the events leading up to Lauda’s exit from McLaren in 1985.

Having won his third title the year before, Lauda suffered dire reliability problems throughout his final season, while team mate Alain Prost motored towards the title. When Lauda decided to call it quits, he made the announcement at his home race, to the chagrin of then team principal Ron Dennis.

Speculation about Lauda’s future began to focus on possible retirement – and those suppositions were not confined to the media. John Barnard said:

I remember Niki saying to me, ‘This fucking little Frenchman is always half a second quicker than me, I’ve got to figure out what to do.’ Niki had the nous to suss out his competition and play games with them mentally but, at the end of the day, Prost was just quicker. And it used to piss Niki off no end, because he couldn’t figure out how to find that [lap] time.

The ’84 car was nailed down at the back, which meant you were nearly always trying to dial out that entry understeer, which Alain could kind of drive around. Niki had to dial it out a bit more to be comfortable. I think Niki would go in a little deeper and a little harder, so he needed a bit more grip from the car’s front end.

In 1985 it had become clear early on that Niki had started to lose his edge, his will to win. He climbed into the new car and immediately saw it didn’t have the grip of the previous year’s. He was going to have to work a lot harder and it was clear to me that he had started to have doubts.

Lauda, who had turned 36, did not exactly refute his technical director’s point in July 1985 when discussing his season thus far with Alan Henry. He said:

This year I think I made an improvement because there have been races where I’ve only been three- tenths away from Alain. I mean, this isn’t good. I don’t want to say I’m happy about it. In fact, I’m not happy. But it’s better than being 2 seconds away, which I was at some circuits last year.

Everything happens so quickly with a turbo. You have to get used to it – but there’s no time to get used to it. I mean, it’s just straight onto the track, one chance at a fast lap, and that’s it. You don’t have time to work into a rhythm and you’re suddenly presented with 300 bhp more. You have no choice. It’s all happening. It’s just a big kick up the arse and you’ve got to get on with it and I can’t handle that as well as the others; it’s as simple as this.

But I’m working on it. In that respect, there are circuits that help me; the faster circuits with wide- open bends where you get into a rhythm, where the power application is more spread out over the whole lap. But at somewhere like Montréal – stop, start, stop – I hate this. I find myself suffering more. There is no question there has to be a point where you say: ‘Right, I’ve done everything, I’m just repeating myself.’ But I don’t know where that point comes with me.

Lauda went on to draw a comparison with his sudden decision to quit at the end of 1979:

When I retired then I had a rest from it all and then came back. But I don’t think you can take my career before 1979 into consideration when you are thinking like this. It was a different era and then I started all over again in 1982.

It’s difficult repeating the same thing over and over again. It’s normal that motivation can vary from circumstance to circumstance and I’m trying to put myself in a situation where I am fully motivated for this year, to try and beat Prost again. But sometimes I don’t know whether this is enough for me. I really need to be in deep trouble. I need a major problem to solve and kick myself in a big way. I am in the best team and have the best car. I’m happy in this situation and with these people. But maybe at the end of the season, they won’t be happy with me. So then I’ll have to make a decision.

Putting in the effort to win a World Championship is like walking up a mountain. The air is thin and you have trouble breathing when you get up high. But when you come down again, you’re satisfied with your achievement. Going for another championship is like being told you’ve got to go back up that mountain – but climb higher. Knowing what you already know, maybe you take it a little too easy to start with, knowing that you’ve got to conserve the oxygen for when you get higher. The risk is that when you’re taking it a bit easy, somebody else goes past and beats you to the top. It’s a normal reaction, I guess, and I’m trying to fight it.

That fight, weakened in its intensity by five more mechanical failures in successive races, reached a conclusion in the week leading up to the German Grand Prix on 4 August. Lauda told Dennis he intended to retire at the end of the season. Dennis accepted the decision. He asked that Lauda keep it under wraps until such time as Dennis had secured the services of another driver, the logic being that, once the news got out, rival teams running the leading drivers would immediately tie down any contracts that were outstanding. A week later, Dennis informed Lauda that McLaren had signed Keke Rosberg for 1986.

The timing was convenient. The next race was in Austria; an ideal place for Lauda to make public his retirement. He asked Marlboro’s press attaché, Agnes Carlier, to arrange a press call for nine o’clock on Saturday morning on the understanding that this would be a Niki Lauda press conference and nothing to do directly with either McLaren or the team’s sponsors. Ron Dennis had other ideas.

When the two appeared together in front of a packed room, the feeling in the audience was that this could go either way; Lauda was either staying for another season or, more likely, he would be stopping sometime soon. Lauda picked up the microphone and got straight to the point:

As I’ve used eleven years out of my life to follow the fascination of driving Formula One cars, which I really loved and still do, I think it’s about time to take the decision to do something else. As Lauda Air is taking hundreds of people daily to their holiday places, we’re going to expand and buy new aeroplanes. And I want to devote all my time to operate the airline, which is based in Vienna.

With Dennis by his side, Lauda thought it appropriate to add: ‘More important than that announcement is that I especially thank Ron Dennis. For four years I’ve driven for him and we’ve had our ups and downs, but we won the World Championship. For me, it was fantastic last year. Certainly I must thank John Barnard and all the sponsors who have been involved through my eleven years.’

When asked if he would consider making another comeback, Lauda said: ‘Nothing is ever definite. The difference is that last time I made a sudden, emotional, decision. This time, I have thought it through much more. I can’t say what will be in my head in three or four years’ time, however. Last year my motivation was to win the championship, but this year I have not been able to find a new motivation. I’m having a bad year – which is nobody’s fault – but, really, I can’t find a good reason to go on next year. So . . . I stop.’

At which point, a po-faced Dennis took the microphone:

There is one thing that Niki has consistently left out in his statements. And that is that our success last year is principally the result of John Barnard’s fantastic car. Both the drivers had a tremendous season last year. When Niki refers to me, he should be referring to both myself and John, because we share the responsibility of running the team and the company. Very rarely are so many journalists together as now. So many of you tend to overlook the role the designer plays. He’s certainly as important as the drivers, and certainly more important than any other member of the management.

As regards to Niki’s retirement – or stopping for a year, to be more accurate – our position will always be the same. We presently operate McLaren International to win Grands Prix, and will certainly have two drivers next year who will be capable of winning Grands Prix. Who will replace Niki is not decided yet, but you’ll obviously be very high up on the list as regards knowing who, when.

The audience stood in stunned silence. The failure to thank or pay tribute to the driver to his right was, even by Dennis’s sometimes gauche standards, a new low in a lack of grace. Nigel Roebuck, reporting for Autosport, summed it up in his usual succinct manner: ‘Greatness,’ wrote Roebuck, ‘is not confined to the drawing board or the balance sheet, as most of those present appreciated.’

Naturally, there were a considerable number of Austrian journalists present, among them Gerhard Kuntschik of Salzburger Nachrichten. ‘Niki was very angry after this; really angry,’ said Kuntschik. ‘All he wanted to do was tell us about his decision to retire and Ron Dennis comes out with all this stuff about John Barnard. We had the impression that Ron was upset because he hadn’t been able to make the announcement; that Niki was the one who was in charge. Niki could hardly speak afterwards and what he did say about Dennis, we couldn’t print his exact words!’

On race day, it looked like Lauda might get his own back in the best possible way. With the Österreichring favouring aerodynamics – a strong suit on Barnard’s car – Prost had taken pole for the first time in 1985, with Lauda third, his personal best as reigning World Champion.

It looked like 1984 all over again as these two pulled away from the rest, Prost upsetting the symmetry by making a stop for fresh tyres at half distance. The potential for a rare and tasty battle began to emerge as Prost slashed the lap record and made inroads on the leading McLaren. At this rate of going, and in the absence of team orders, calculations indicated they would be at each other in the closing stages.

Then, with 13 laps to go, Lauda pulled to one side with yet another failure on his turbo. Flicking off his belts, Niki was out of the car and away before many of the spectators had realised what had happened. On learning of the home hero’s retirement, most of the crowd went home too.

Typically, though, Lauda was to have one last shout.

“Niki Lauda: The Biography” by Maurice Hamilton will be published on May 14th by Simon & Schuster. Order your copy via Amazon