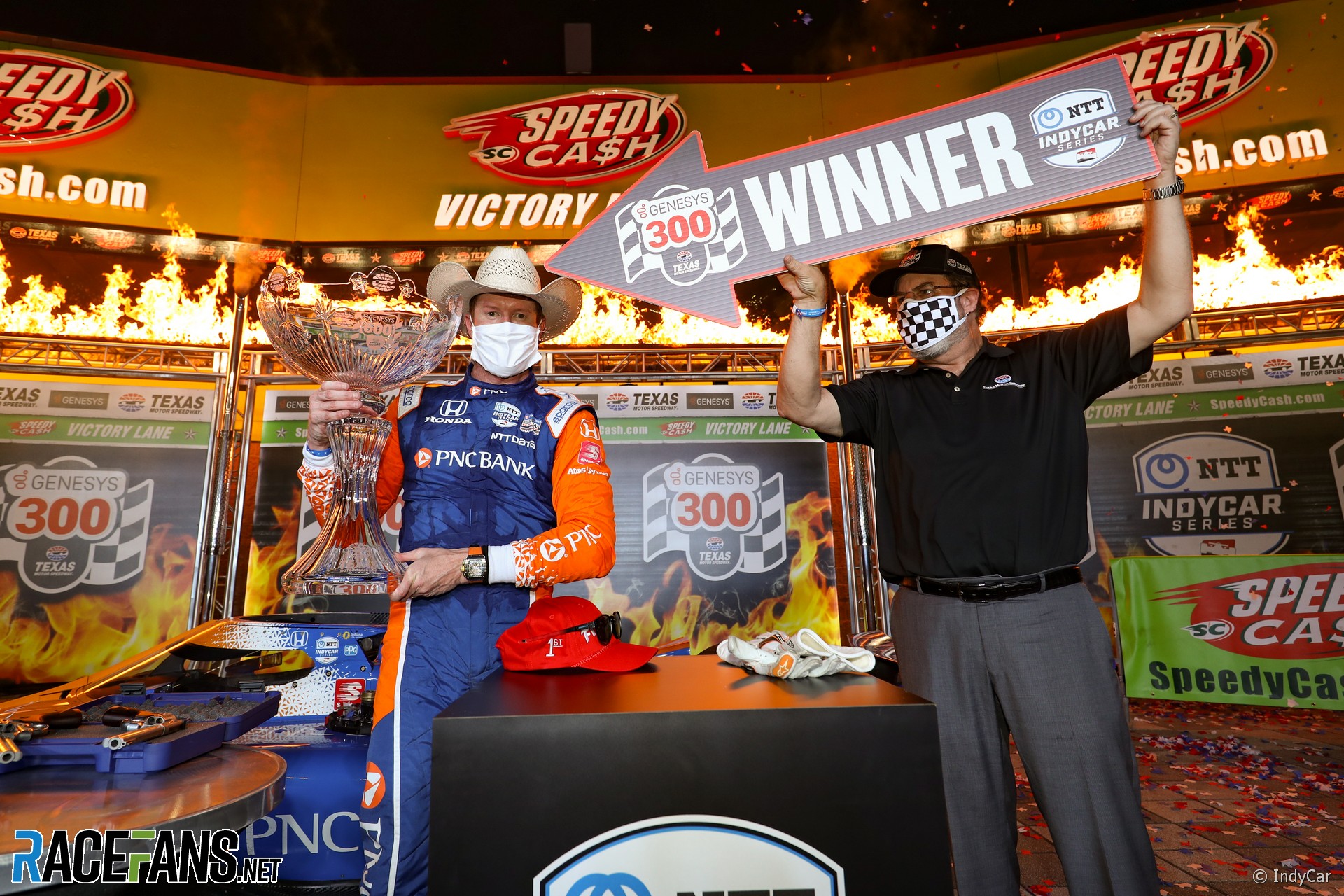 The Ganassi pair had the legs on the field after the Penske drivers dropped back early in proceedings.

Josef Newgarden began his title defence from pole position and held the upper hand at first. But Dixon stayed out a lap longer than the Penske driver on their first stint as they neared the maximum 35-lap stint length, and used that to jump into the lead.

From then on Dixon only yielded the upper hand during pit stops. He retained his advantage despite two cautions, the second for debris, the first coming about after two of the field’s three rookies collided with each other. The unlucky Alex Palou was blameless for the collision, being swiped out by Rinus VeeKay as he emerged from the pits.

Rosenqvist picked his way past Penske duo Simon Pagenaud and Newgarden with on-track passes on laps 76 and 118. As Dixon became mired in traffic – first the third Penske of Will Power, later Alexander Rossi’s heavily delayed Andretti – Rosenqvist was able to carve seconds out of his lead.

With 32 laps and one round of pit stops left to go, Rosenqvist was within a second of his team mate. But Ganassi brought him in two laps earlier than Dixon for his final pit stop, meaning Dixon began the final stint still in the lead.

The two cars emerged into traffic, and Rosenqvist took a risk running around the outside of James Hinchcliffe. The outside line had been gripless all evening, and it caught him out, spitting his car into the barrier.

By the time that had been cleared up there were only three laps to go. Dixon, with a useful buffer of lapped cars between him and Pagenaud, ran out the winner, the chequered flag falling seconds after Charlie Kimball spun into the wall on the backstraight.

Newgarden completed the podium ahead of Zach Veach and Ed Carpenter. Conor Daly took sixth, bringing some pleasure to Carlin, who had to trim their entry to a single car at short notice.

Behind Colton Herta, seventh, came the race’s most impressive comeback drive. Ryan Hunter-Reay had to take a drive-through penalty at the start of the race due to late-running technical work on his car, but recovered to eighth.

Oliver Askew, the only rookie still running at the chequered flag, came in ninth for McLaren SP. Tony Kanaan completed the top 10 on his final appearance at Texas Motor Speedway. Kimball was recorded a lapped 11th ahead of Pato O’Ward in the second McLaren SP, Power, Marco Andretti and Rossi – the latter suffering similar pre-race problems to Hunter-Reay.

It was a race to forget for RLL. Takuma Sato smashed up his car in qualifying, which was held just three hours before the race start, and his chassis couldn’t be repaired in time. Graham Rahal’s ECU failed him prior to the formation lap, so he also had to take a penalty.

IndyCar’s season has finally begun, pandemic notwithstanding, with a race held in front of empty stands. Drivers swapped race helmets for face masks when they emerged from their cars. Following this first run, it will be a month before we see these cars in action again, on the Indianapolis road course.