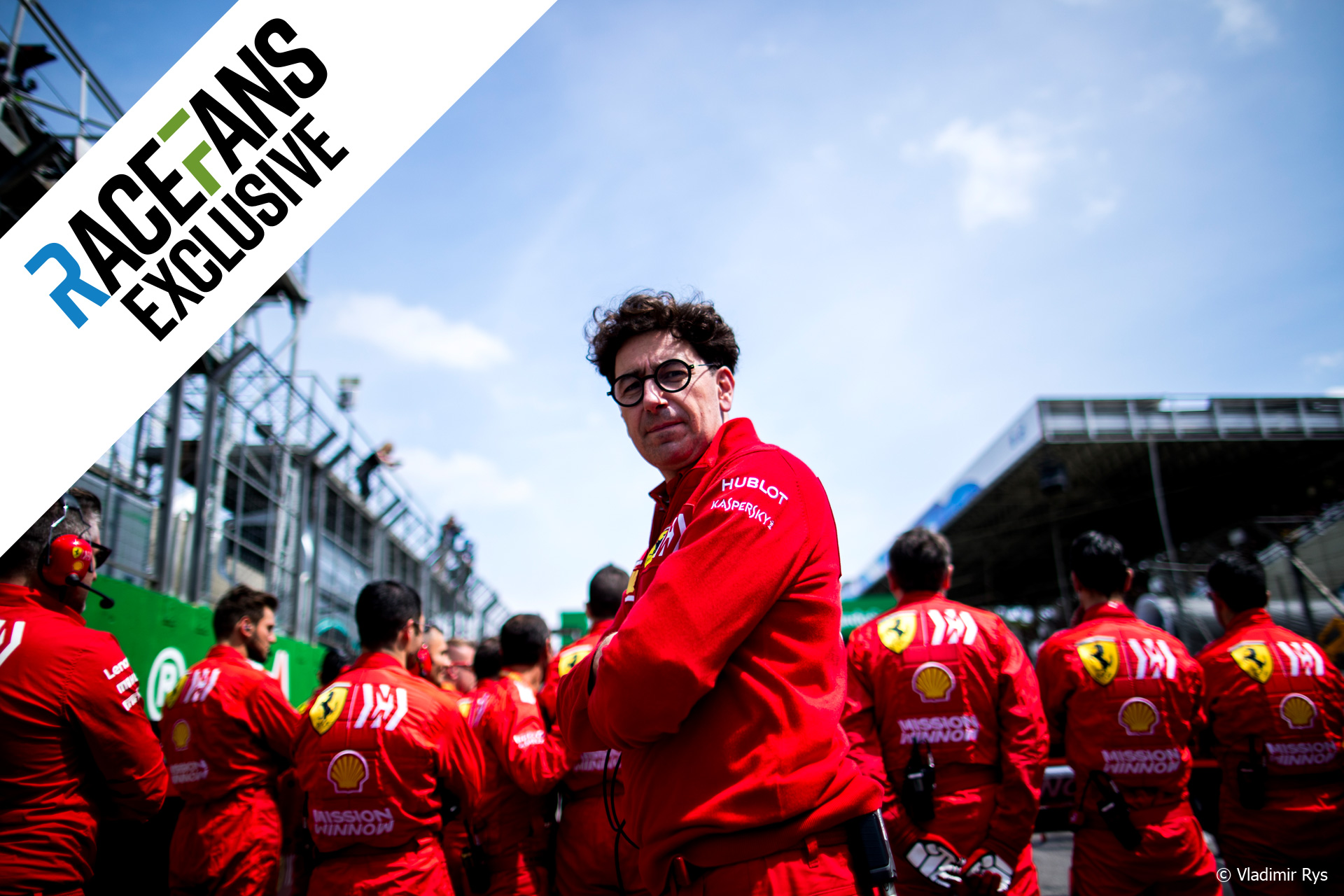 Step back a few years and consider Ferrari’s traditional approach to Formula 1. The general take – rightfully, in the view of its die-hard ‘tifosi’ – is that the sport owes its very existence to the Scuderia and would implode were they to withdraw or, heaven forbid, race elsewhere.

Whether this would happen has never been tested. Ferrari has banged the table but never left it. But it is equally true that F1 has stepped back from numerous brinks, emboldening its most powerful team.

But ultimately, both sides recognise that a symbiotic relationship exists and that it would be pure folly for either side to destroy the bonds that bind them over petty squabbling.

Equally, Ferrari’s rivals need them, for the team provides a convenient target, on- and off-track. Tell a sponsor you thrashed Ferrari in the last race or, and they are more likely to stretch for a pen than without mention of that hallowed name. Indeed, sponsors have entered F1 via other teams simply to be associated with Ferrari, even at car’s length away. That fact conveys all you need to know about the allure of the cavallino rampante.

By any measure, 70 years is a long time, let alone in sporting terms. Throughout this period Ferrari often stood accused of putting its interests first, placing itself ahead of sport in pursuit of its objective of cost-effectively strengthening its brand in order to sell high-priced objects of desire by participating on the global platform that is F1. It worked extremely well for seven decades, so why change now?

To glean a better understanding, RaceFans spoke exclusively to team principal Mattia Binotto last week. Since his installation in place of predecessor Maurizio Arrivabene, Binotto has settled well into his overall managerial role, which followed 25 years in technical positions.

Times have changed, and so has Ferrari’s culture, strikingly so during Binotto’s tenure. A pointer is the team’s initial acceptance of a $175m budget cap which arguably hit them harder than any other given as it has one of the highest budgets. Now it has consented to a further reduction, to $145m next year and further $5m drops in each of the following two seasons.

This represents the tip of an evolving iceberg, for Ferrari could have triggered its notorious veto. So did this change come about voluntarily or was it forced upon the team by circumstance? Ferrari is one of the most profitable car companies on Earth and seems set to stay that way given its lengthy customer waiting list despite the ravages of Covid-19, so a matter of enforced economics it clearly was not.

Is a longer-term reason for this magnanimity, of seeing the bigger picture? Or could Ferrari revert to commonly held type (and hype) once the dangers of this pathogen recedes? This was one of the first subjects we broached with Binotto.

“I think to answer that, at first I believe that there [should be] discussion on the approach, having an open discussion, a collaborative approach,” he explains. “Using the veto sometimes is not the right way of approaching the exercise.

“Having discussions, trying to find the right compromise is the way to move on at first. I think that’s the way we work [now].”

Talk of Ferrari making compromises is not something we are used to hearing. That said, during these discussions, which centred around budget cap reductions as low as $120m, Ferrari was initially seen as the obstacle, effectively refusing to budge.

Binotto concedes that, “The budget cap reducing to 120 (million), this decision should have been made in a week’s time, [but] it took more than a week because Ferrari insisted on the fact that we need to really go deeper on the numbers, to analyse [them], to basically proactively support the discussion towards the conclusion we [reached].”

There is no doubt, though, that Ferrari could have triggered its veto, which currently permits the company to block any regulatory changes that are not safety related. Yet Binotto did not.

“So, I think [the foregoing] is the first approach we should always have [it],” the Swiss-born engineer continues, “and the veto is only something at the end [of the process] if you are completely against what’s happening.

One thing is sure: Ferrari is paying and will continue to pay a heavy price for this ‘good for Ferrari, good for F1’ philosophy, for it will need to cut around by 350 heads – around a third of its F1 team workforce (excluding engines) – by 2023. Why did Binotto (seemingly) readily agree to this given the heavy human cost?

“Let’s [go] step by step,” he says. “It was a financial regulation which was agreed last year, the $175 million budget cap, which was already a huge, difficult and challenging exercise for the first three top teams, and particularly Ferrari. But that was an agreement from last year for which we were prepared.”

Then came Covid-19, which changed the entire planet and, by extension, F1. This placed massive pressure on teams, with some calling for a cut to $120m. Binotto says Ferrari could clearly not readily agree, adding that the full implications needed to be analysed. Indeed, according to an insider, Ferrari embarked on the most exhaustive cost analysis in its history to establish where savings could be made.

“It’s not simply a decision based on a number,” Binotto continues. “The first implication for us was our work, our employees in term of employment. We feel strongly that’s our social responsibility as Ferrari, and our first objective was to protect our employees.”

After what he refers to as proactive discussions, “the right compromise or solution” was found, namely “$145m with some exclusions, that has been a good compromise.”

“So, it was not an emotional final conclusion, it was a conclusion which suited the teams and certainly ourselves because we took time [to discuss it]. I cannot say that I’m fully happy with the solution because now the exercise is certainly very difficult but I’m happy considering where the discussion started.”

In terms of redeployment Ferrari faces various options including WEC and/or IndyCar projects. The indications are that F1 caps will be further reduced in the future.

All of which raises two questions: Should the budget cap eventually be reduced further, say to the $120m level targeted by some? And should stringent regulatory restrictions apply under a cap or should teams have the freedom to decide how and where to direct their spending in what is after all a technologically-driven sport?

“Let’s start from the $145m,” Binotto says thoughtfully, “let’s see what it looks like, let’s see if we can really afford it, and then eventually you realise what would be the next numbers.

“I think the decision of $145m today reflects what will be the technical regulations of the future and their effect as well. For me the number is not only a reduction, but a reflection of what regulations are in place.”

He concedes that “smaller teams will always call for a lower number” but insists that F1 must remain the pinnacle of technology, what he refers to as a “platform of innovation, a competition of technology.”

He adds that, “It cannot become a type of F2 of the future or Formula E even. The fact is, F1 is F1, and the fact that manufacturer teams are pushing technology beyond the limits is important.”

Which brings us neatly to the second question – that of spend versus regulatory restrictions and initiatives such as parts homologation and freezes. Is that really compatible with the technological platform referred to?

“It is a good argument,” says Binotto, who might be described as a ‘true-blue engineer’ if it wasn’t for the bright red uniform. “I think you can always have regulations that can be free, to do whatever car you wish. Six wheels [think Tyrrell’s P34] within a budget cap, because you just give freedom.

“But I think that having a budget cap is a way to control expenses and another way of helping the teams to converge, to a certain level, the performance.

“[F1] is a great show, so if you leave too much freedom on the technical or sporting [side] you may find that you do not have sufficient competition between the teams. So I think regulations are there to make a great show and the regulations become our challenge to find the best solution.”

All well and good and utterly logical, but does Binotto not consider it against F1’s core values to freeze components (and even chassis for next year)?

“Is it anti-Formula 1?” he begins rhetorically. “I think freezing components and freezing chassis next year is somehow ‘anti-competition’, but I think the decision which has been taken is a responsibility towards the sport because we are facing certainly a very difficult situation with the Covid.”

“This is where I think we need to react as a community, F1 community. I think what has been decided, even postponing the 2021 [regulations] to 2022 has been through a sense of responsibility to face what is currently a difficult economic situation. So the one you mention has to be interpreted in that respect.”

Then Binotto once again shows the softer side of the new Ferrari: “These are actions and decisions [that were] taken to help small teams, which are really in a bad situation at the moment.”

In closing we talk about the longer-term future, namely plans for revised power units and plans for bio and/or synthetic fuels after the current regulations expire at end-2025?

“I think postponing the regulations to 2022 was the right choice, because obviously we have Covid-19 and some delays to our plans. But the 2022 regulations were voted last year because we all believe it’s the right regulations to have for the future of F1 for cost implications, for overtaking, for a greater show.

This last comment is a subtle dig at teams such as Red Bull who wish to delay change by a year, a proposal that was voted down but could rear its head again in future. So much for the start of the regulations, but when should they end? 2025 or 2026?

“The power unit [regulations] would expire in 2026 with the next Concorde Agreement [due to expire at the end of 2025, but yet to be signed]. So, we will end with the current format of the power unit in 2025.”

What could be next?

“It is something with which we are starting discussions, but there are so far no conclusions. We are at a very early stage. So we know that for the length of the [new] Concorde Agreement the current [hybrid] format is decided and if there is an opportunity to have something different for 2026 it will be with the new agreements.”

Ferrari’s views – and those of the FIA and F1 – on the new Concorde Agreement make for interesting reading – look out for more on that in a future analysis on RaceFans.

It is clear that the man who was promoted from the role as technical director in January 2019 learned to swim in the deep end extremely fast. Ferrari’s top job can be a poisoned chalice, but Binotto has brought a touch of humility to the toughest team job in F1, and, with it a softer, rounded face.

Do not mistake pragmatism for weakness, however. ‘Newly wrought iron fist in a red velvet glove’ stays top-most in my mind throughout our 30-minute chat.