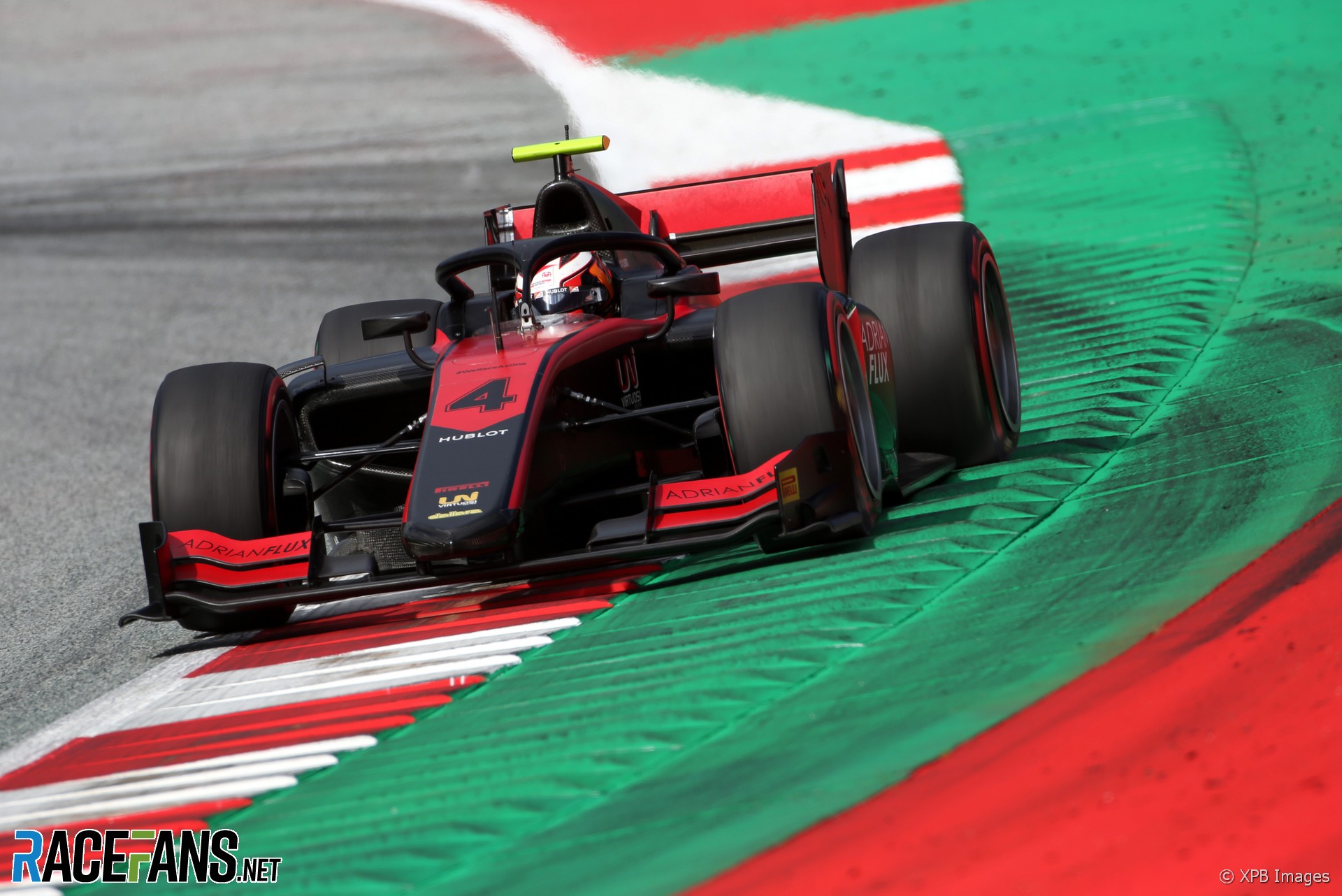 Ferrari may have endured a disappointing qualifying session at the Red Bull Ring, but their junior drivers filled the top three places in the Formula 2 feature race.

Callum Ilott scored his first Formula 2 victory, but it was handed to him after Virtuoi team mate Guanyu Zhou was struck down with a technical problem while leading.

From third on the grid, Ilott had shot between pole sitter Zhou and surprise front row occupant Felipe Drugivoch on the run to turn one. But Zhou reamined stuck to his tail, and when Ilott ran wide at turn four Zhou passed, retaking the lead around the outside of the quick turns six and seven, and reclaiming his lead before lap one was over.

Drugovich dropped behind Mick Schumacher, then lost another place to Robert Shwartzman. The front runners held their positions until the mandatory pit stops began.

Further back, Marcus Armstrong made an aggressively early pit stop to put himself in contention for a leading position. But when Zhou pitted, he lost position to both his team mate and Schumacher, the latter taking the effective lead behind those yet to pit.

Zhou, however, used his fresher tyres to attack. On consecutive laps he picked off Ilott and Schumacher, putting the Chinese driver and top 2019 rookie on top for his first victory.

But it wasn’t to be. On lap 26 the leading Virtuosi slowed with an apparent loss of power as he passed the pits. After a slow tour of the track he headed in around the same time Artem Markeloc was also slowing. However the HWA driver came to a complete stop on the track, bringing out the Safety Car.

New leader Ilott had Schumacher, Armstrong and Shwartzman behind him – a potential 1-2-3-4 for Ferrari. Christian Lundgaard, Dan Ticktum, Louis Deletraz and Drugovich queued up behind them when the race resumed with 10 laps to go.

However Ilott soon found himself in an unchallenged lead. Armstrong, on tired rubber, had to fight a rearguard action against his pursuers. Schumacher threw his car off at turn seven on the first flying lap, losing second place and every other points position.

Ilott therefore began the 2020 season on the top step of the podium. Armstrong deftly repelled Shwartzman until the chequer fell, though the F3 champion impressed on his debut, rounding out a clean sweep of the podium for Ferrari’s junior drivers.

Lundgaard and Ticktum were next, while Giuliano Alesi took advantage of fresher tyres to rise to sixth at the flag. Deletraz was next, and Drugovich’s disappointment in slipping from second to eighth will be tempered by the knowledge it gives him pole position for tomorrow’s sprint race.