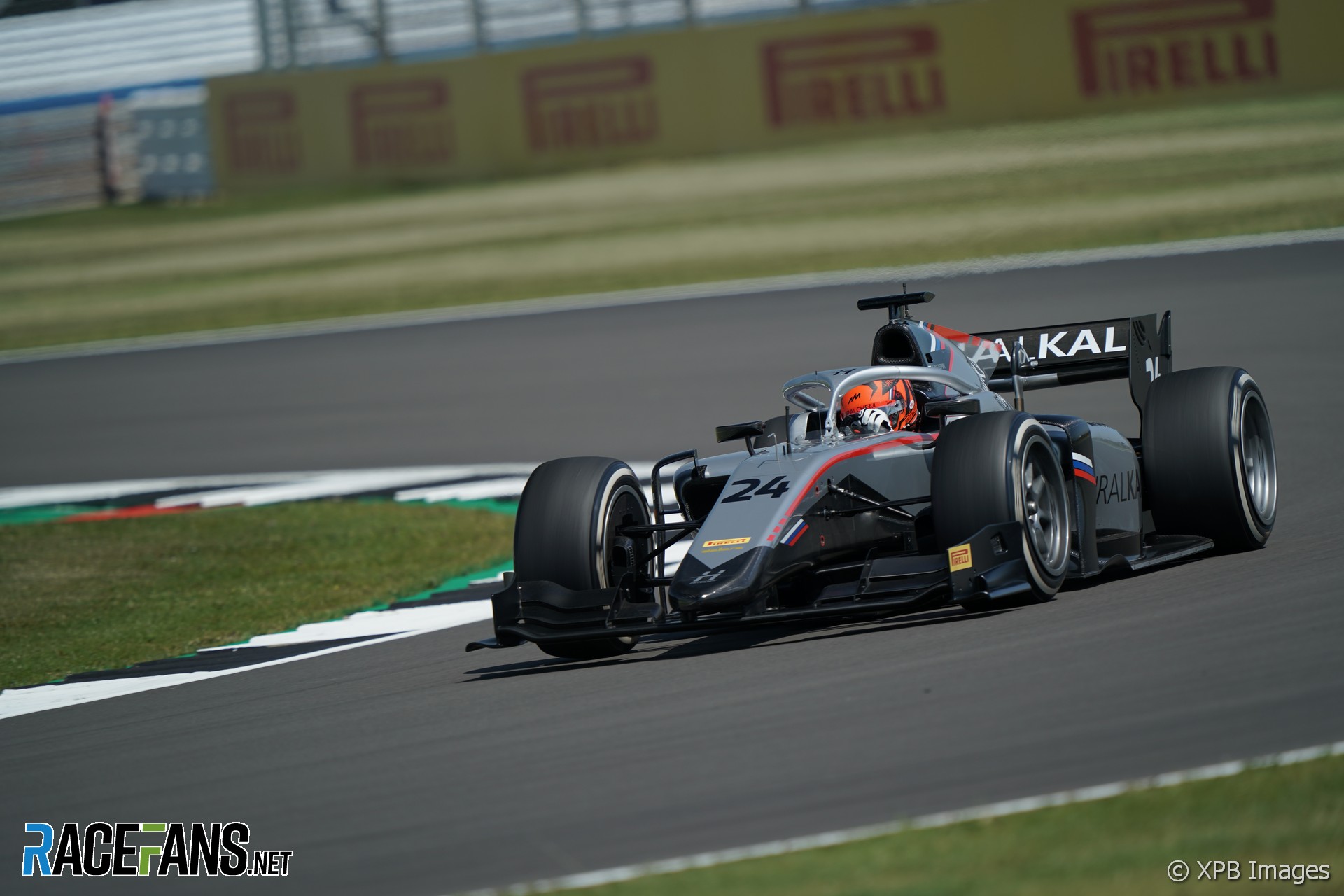 Nikita Mazepin scored his first Formula 2 victory – and the second in a row for newcomers Hitech – in an absorbing race dominated by tyre strategy at Silverstone.

Rookie Felipe Drugovich started from pole and Callum Ilott should have started alongside him on the front row. But Ilott stalled on the formation lap and was forced to start from the pit lane.

Despite the loss of his closest threat at the start, Drugovich lost the lead to Mick Schumacher, who moved up from third on the grid to take the lead before the first corner.

Mazepin, who started fourth, also passed Drugovich on lap one, sparking a fight with Schumacher. He then moved ahead of Schumacher, both on the same strategy, having started on the medium tyres with a mandatory pit stop to switch to hards at some point during the 29 laps.

Those who started on hard tyres had a substantial pace advantage by lap seven. Guanyu Zhou used it to stage an impressive charge up the field. Both Mazepin and Schumacher pitted on lap eight, leaving them a field of slower cars to pick through before the then-top-10, all starting on hard tyres, would pit.

Drugovich reclaimed the lead when the two pitted, pulling out a two-and-a-half second lead on Zhou and leaving the rest of the field miles off, with Aitken over 10 seconds back in third.

Christian Lundgaard, on the same strategy as Mazepin and Schumacher, was able to pass Schumacher with an impressive sweep and claim effective second, while Mazepin was able to move further up by leaving the pair behind muddled in alternate-strategy traffic.

By lap 20 the cars that had started on hard tyres were beginning to pit, handing the on-track lead to Zhou while Drugovich headed in for what turned out to be a disastrous pit stop. It dropped him back to twelfth while Mazepin and Lundgaard were up to third and fourth on-track.

Zhou pitted on lap 22. Mazepin, by this stage, had pulled out four-and-a-half seconds on Lundgaard, leaving him and Schumacher to be harassed by Louis Deletraz for the final podium position.

Deletraz made the move on lap 24, at the same time as Zhou’s tyre advantage really made itself obvious. Zhou grabbed Schumacher, forcing him back to sixth, his hard tyres dropping off with clearly fading grip, then moved up on Yuki Tsunoda for fifth and almost immediately passed Deletraz as well.

Ilott, on a furious recovery drive after his pit lane start, heaped more woe on Schumacher by pushing him down to seventh. Zhou, meanwhile, was able to take more than four seconds out of Lundgaard ahead of him and make a move for second with two laps to go.

Mazepin had nearly six seconds lead by the final lap and despite Zhou slicing more than half a second out of that before the chequered flag, took the win, with Tsunoda managing to snatch third from Lund

Dan Ticktum took eighth place and will start from reverse-grid pole position in tomorrow’s sprint race. Robert Shwartzman – who finished 14th, his first pointless result this season – retains the lead of the championship on 81 points to Ilott’s 73.