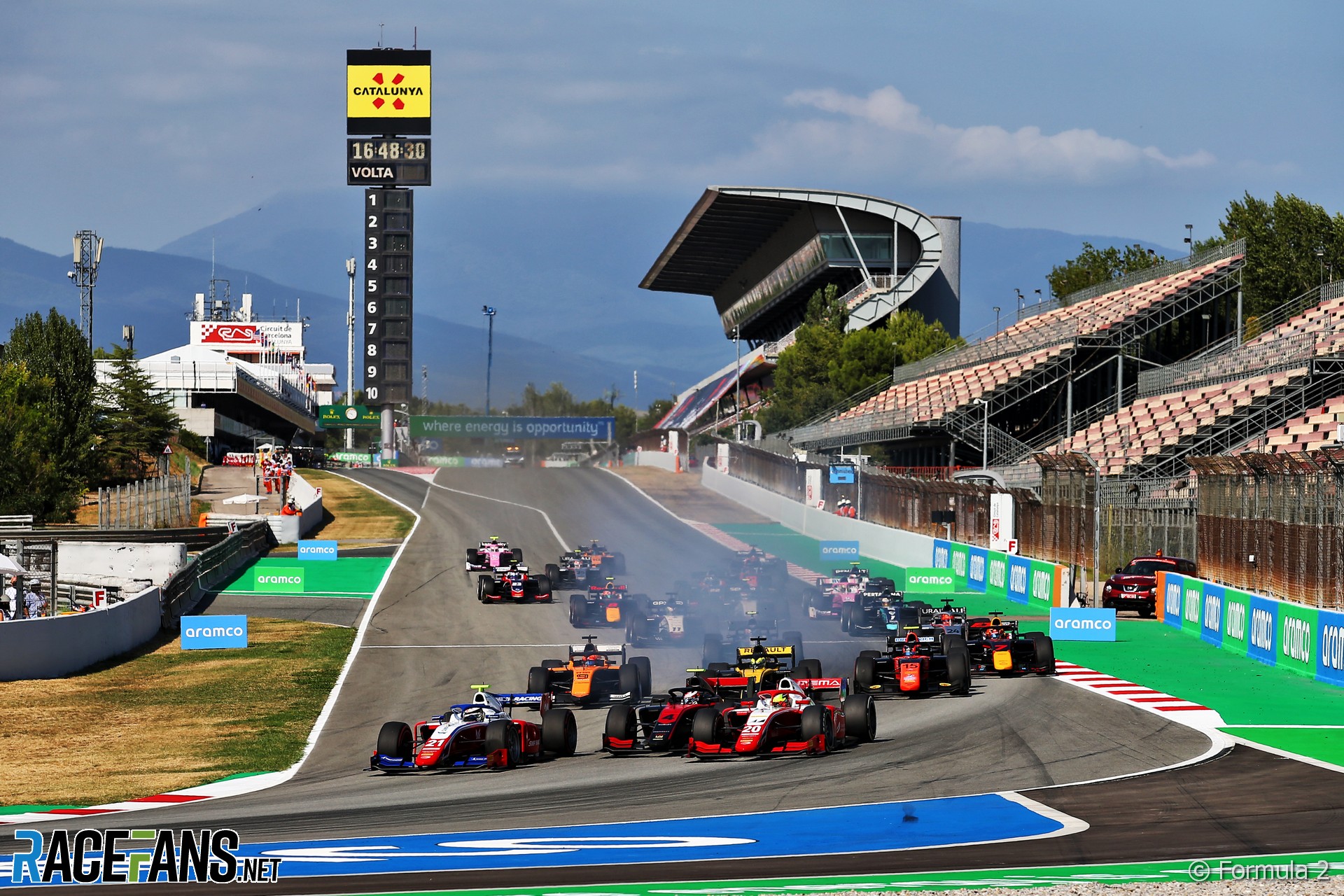 Nobuharu Matsushita won a dramatic feature race at Circuit de Catalunya, despite starting the race from a distant 18th on the grid.

Starting on hard tyres, Matsushita made an unusual strategy work in a race of high tyre degradation which was disrupted by Safety Car appearances.

Pole-winner Callum Ilott came under attack from fellow Ferrari Driver Academy members Robert Shwartzman and Mick Schumacher at the start, the latter making a remarkable getaway from fifth. They went three-abreast into the first corner, with Shwartzman ultimately taking the lead.

The race was neutralised on the same lap as Marcus Armstrong spun off into the gravel at turn 13. The Safety Car made its first appearance was he retrieved, letting Shwartzman hold onto the lead unchallenged.

Racing resumed on lap three with Shwartzman making a quick getaway and immediately pulling away from Ilott. By lap seven those who started on the soft tyres found them suffering in high temperatures and dropping off, and headed for the pits. Yuki Tsunoda, Jack Aitken and Louis Deletraz were the first in, Aitken losing time with a messy pit stop as his team struggled to attach the front left tyre.

Ilott and Shwartzman pitted on lap nine, among the last to pit from the softs, while the cars on hard tyres – including Schumacher, who took the race lead, were able to continue. However by lap 20 the advantage seemed to be firmly with those who started on softs. Schumacher was visibly struggling with grip in almost every corner.

Nikita Mazepin, running second, said that there was “nothing left” in his tyres, but with 17 laps to go, it was clearly too soon to come in for softs. Nonetheless Schumacher was called in for new tyres with what seemed like an impossible number of laps remaining to make the softs last.

Giuliano Alesi beached his car on a kerb in lap 25, after a tap from Sean Gelael, bringing out the Safety Car. Predictably, some tried to take advantage of the opportunity, including Ilott who pitted again for another set of soft tyres. He emerged behind new leader Yuki Tsunoda and Felipe Drugovich.

Matsushita rode his luck, gaining 14 places by immediately pitting and coming out third. Unfortunately his team mate Drugovich was left out for another lap further, dropping him to ninth.

The Safety Car came in on lap 27. Tsunoda held the lead but having not pitted for another set of softs it seemed only a matter of time until he Ilott and third-placed Matsushita used their fresh rubber to pounce.

But despite near-constant pressure, Tsunoda rebuffed them brilliantly. He was aided in this by Matsushita scrapping hard with Mazepin and Ilott. With six laps to go, Tsunoda was still keeping Matsushita at bay while Ilott was overtaken for third by Shwartzman.

On lap 32, Matsushita finally made the move on Tsunoda into turn one, with Shwartzman following him through to take second. Moments later Williams tester Roy Nissany crashed into the wall at turn three, following a shambolic pit stop, prompting a third Safety Car.

With the clock ticking down, this threatened to bring the race to an end. But the Safety Car returned to the pits with enough time left for a last-lap dash to the flag.

Matsushita led the restart and showed his rivals a clean pair of heels. Shwartzman followed, leaving Tsunoda battling hard with Ilott, Mazepan and Zhou. Mazepin emerged victorious from that four-way scrap, but a five-second time penalty for violating track limits dropped him to 13th.

That promoted Zhou to third, a fine reward for his mechanics who’d worked frantically to replace his engine in time for the race. Tusnoda’s efforts earned him fourth ahead of Ilott, Schumacher, Drugovich and Luca Ghiotto – the latter earning pole position for tomorrow’s race.

Ilott retains the lead of the championship by a narrow margin, on 116 points while Shwartzman moves up to 103. Christian Lundgaard, who failed to score today, remains third on 87.

On the final lap Gelael came to an unexplained stop in the last sector. The FIA subsequently announced he was taken to hospital for medical checks.