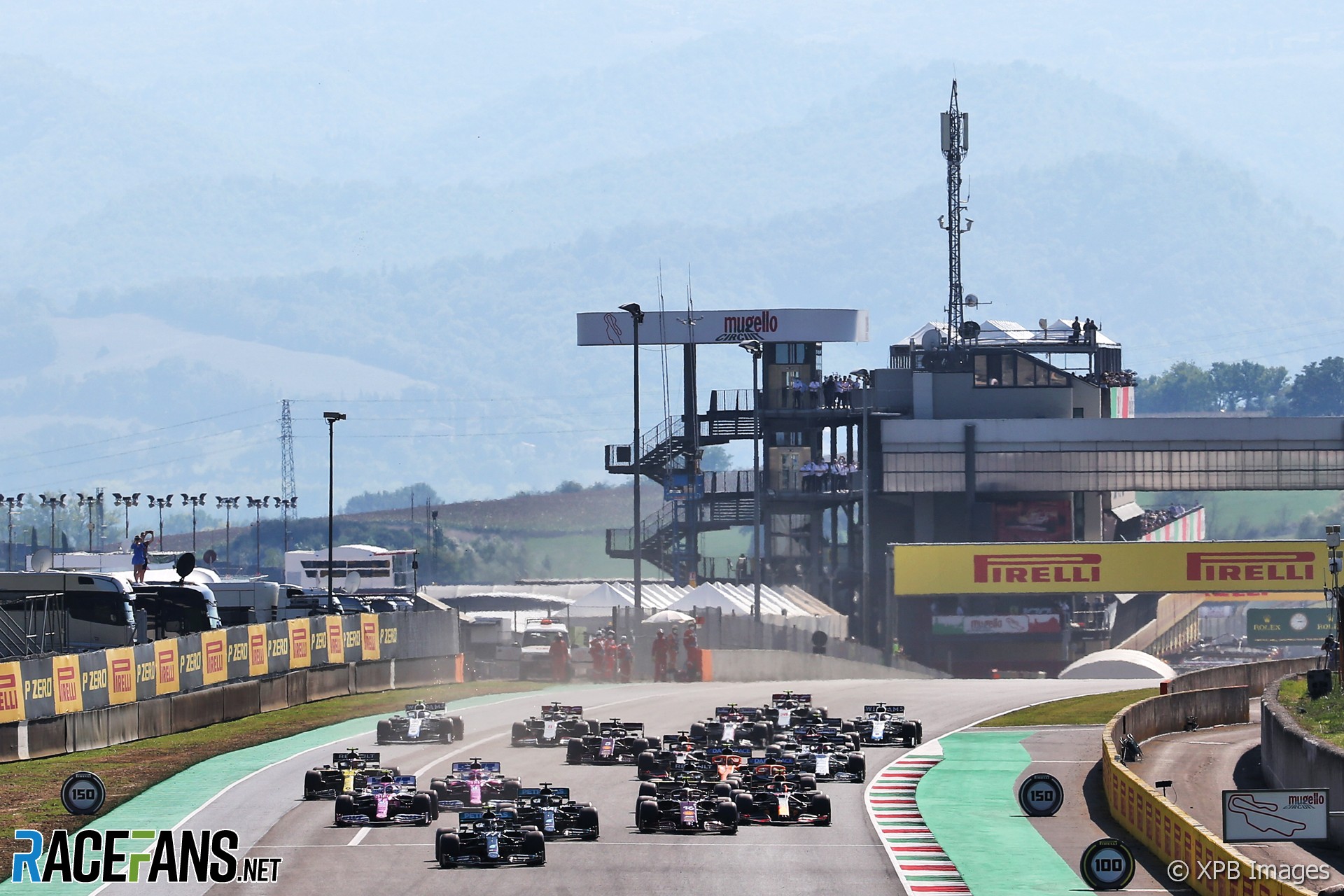 Formula 1 passed the halfway mark of its truncated 2020 season midway through the Tuscan Grand Prix at Mugello. This was the first of several venues added to this year’s calendar which no one expected the series to visit 12 months ago.

It’s therefore timely to take stock of what the sport has achieved in the face of complications caused by Covid-19; to take a look at what F1 has learned – both the positives and negatives – from the first three sets of triple-headers making up nine (of eventual 17) rounds, and what can be applied.

That last set of statistic provides the first pointer: As proven by the Austrian and British doubles, it’s possible to stage back-to-backs at a single venue, but only where push comes to shove. Changing the tyre selections where possible created some variety, delivering different winners within each double set, but such ‘twinning’ should be a last resort.

Equally, although no rounds were staged on reversed layouts, a number of promoters are known to have investigated the feasibility of converting their venues into bi-directional circuits, and it is likely that during their next upgrades a number of facilities could – where feasible, of course – apply for Grade 1 licences in both directions, and alternate their races on an annual basis. Nothing like a bit of variety.

Similarly, although different layouts were considered by a number of circuits, only Bahrain’s second race, dubbed the “Sakhir Grand Prix”, will feature such a variation, using its novel ‘Outer’ layout. Thus, as with ‘reverse’ running, it is not beyond the realm of possibility that venues vary their layouts going forward. Teams may oppose such a move as they detest uncertainty, but F1 has been too predictable for too long.

That said, the entire sport – including all categories of fans, from petrolheads to casual consumers – must see that triple-headers are not the way forward. Not only are they debilitating for race and set-up crews but play havoc with domestic lives of F1 personnel at all levels. Add in fan fatigue and sponsor saturation, and it is abundantly clear such scheduling is acceptable under specific circumstances and should not become the norm.

By the same token, staging 17 rounds in the space of 24 weeks, an average of a race every 10 days, does not means F1 folk should submit to 25 races in 35 weeks – even if weekend formats are reduced to two days of track action, as will be experimented with at Imola. Keeping hectic schedules is well and good within similar time zones, but not across hemispheres. There are good reasons why F1’s head honchos don’t attend all rounds.

Teams must also question whether it is necessary to fly over 150 personnel to grands prix when races under Covid have shown they can make do with 85, albeit with reduced marketing, media and hospitality contingents. Are 70 additional on-site heads really necessary, or could a number of previously considered ‘essential’ circuit activities be better (and more economically) covered from base?

On the plus side, the current crisis has re-opened dialogues between F1 and a number of circuits which had either ‘fallen’ off the calendar or never held a race. Not only are they talking, but the dialogue has resulted in more streamlined circuit approval processes. The result is that F1 now has solid reserve lists, with circuits ready to step in on an invitational basis at short notice should races be cancelled for whatever reason.

Of course, no-one wishes for another year like 2020 to revisit F1 – or any other walk of life, for that matter – but the fact is the epidemics are by their very nature extremely unpredictable. This time last year fans were planning annual holidays and family get-togethers around F1 calendars; currently they don’t know when or where next year’s F1 season will start or end.

On present evidence there is every reason to believe the 2021 F1 calendar will be disrupted in some way. Indeed, during a select media interview with FIA president Jean Todt in Mugello, the governing body’s consultant epidemiologist Eric Caumes added that “2021 will be like 2020” in terms of precautions to control the virus.

This largely chimes with F1 CEO/chairman Chase Carey’s prognosis in early August, when he warned of a requirement for “flexibility” during a call to investors: “We are planning a 2021 [F1 calendar] that looks like we would’ve expected, which probably will be a 22-race calendar, a calendar that probably starts and finishes about when our [usual] calendar does.

“We may make it so there’s a little more space in the front end of the calendar, and the second half a little busier. So we’ve got a little more flexibility built into it, but I think that’s probably a tweak to it, not a real restructuring.”

Note his words carefully, for they provide clues to next year. The take-away is that in August F1 planned for a 22-race schedule, one which is fundamentally familiar, albeit with added flexibility. Obviously, lessons learned from this season – including the wisdom of hosting the season opener on a far-off continent – has been applied during the construction of the next calendar, and even fixture lists beyond next season.

Carey’s words imply that the season will start in mid-March and finish at the end of November, give or take a week at either end. However he implied Albert Park in Melbourne is unlikely to stage the opener. Why so? The lead time required to construct the park circuit without guarantees that fans, whose proceeds are crucial to covering the annuals costs of constructing the circuit, will be permitted.

Watch for crucial indicators when the Australian government issues guidelines for the Brisbane Masters and Australian Open tennis tournaments. Melbourne pays a premium to host F1’s curtain-raiser, but the word is that the circuit has requested a discount should its race not be able to play to packed stands, which would in turn hit F1’s income. Hence moves to delay the race in the hope that a later date will enable a full house.

Thus, the Australian Grand Prix is likely to form part of a set with Singapore and Japan later in the year. Any decision about spectators would need to fall by the end of December at the absolute latest to facilitate building for March, yet the calendar needs to be finalised by the FIA World Motor Sport Council in early December. Apart from this formality, delaying the schedule is grossly unfair on other venues and, of course, fans and the teams.

Therefore the season is likely to open in Bahrain, preceded by an official (three-day) pre-season test session, with cars and kit remaining in Sakhir until the race weekend. Thereafter the series is likely to head for Vietnam and China or – according to solid sources in the loop – find itself in Jeddah for a street event, massaged by F1’s biggest (by far) current sponsor Aramco, before travelling east for two races in Asia.

As revealed here, Brazil held a bargain basement contract which is unlikely to be renewed – certainly not for free – and thus F1 is seeking an alternate event for the slot, particularly as mooted replacement Rio de Janeiro has yet to build its circuit. Enter Jeddah as early substitute for a round at the under-construction Qiddiya entertainment city, which has been delayed by the pandemic.

However, given the need to construct a street circuit in record time under challenging circumstances the race could be delayed and twinned with Abu Dhabi in November – the more likely option – but either way our sources are bullish that a street race in Saudi will appear on F1’s 2021 calendar.

Talking of Vietnam, the 2020 edition of the race has not been officially cancelled although F1 talks of a ‘final 17-race calendar’ without Hanoi’s race. That suggests it is off the schedule but that some faceless suit tasked with breaking the news globally is reluctant (or fearful) to do so. Hopefully the penny (or, to use the local currency, dong) will soon drop.

After its return from Asia via Baku the Dutch Grand Prix at Zandvoort on May 2nd is likely to be F1’s first stop in Europe, followed by either a race in Spain or a reserve event before Monaco’s race on May 23rd. The latter will only go ahead if spectators are permitted at the circuit on that particular date, which would need to be known before building commences in mid-March.

Formula E’s race scheduled for May 8th also hangs in the balance, for Monegasque officials are insistent on spectator access on its preferred dates for both events respectively, and thus both championships need fall-back positions – so enter a reserve round in reasonable proximity. As this year has proven, a number of venues are willing to step into the breach provided the terms and conditions are right.

Thereafter the calendar is expected to follow much the same course as usual until Monza. There is talk that Istanbul wants a return on a permanent basis, so could replace any recalcitrant European rounds – Catalunya and Hockenheim beware – provided a sufficiently large cushion exists on both sides for travel purposes. Logically Turkey should be twinned with Russia after Italy’s race, if the former features next year, that is.

After an Australasian set – night race in Singapore, Suzuka’s round and Melbourne’s delayed race, in a sequence yet to be decided – F1 heads across the waters to North America for Austin and Mexico. Miami’s oft-mooted race is seemingly as far from reality as ever.

Then it is time for another Middle Eastern visit, with Jeddah preceding Abu Dhabi’s finale assuming Saudi’s maiden race is staged later in the season and not in April.

F1 commercial rights holder Liberty Media’s priority after a dismal 2020 – best estimates have revenues dropping 50% against budget – is to construct a 22-race calendar that maximises revenues for the teams and itself while maintaining flexibility combined with efficient logistics. This schedule ticks all boxes – particularly with the inclusion of big-paying Jeddah, which, though, rides on the back of a twinned Middle East race.

Equally, Liberty has amassed a number of reserves – including Istanbul, Portimao and both German circuits – all which are ready to plug-and-play should there be drop-outs. In such eventualities there is sufficient leeway for contingency planning should any of the long-haul rounds find themselves under threat.

What about Mugello or Imola? The former was very much a one-off included this year only to celebrate Ferrari’s 1,000th grand prix, and made possible by dint of (very) limited attendances. Packing 60,000 spectators, mostly arriving by car, would stretch the local infrastructure beyond limits.

As for Imola, with Liberty targeting so-called “destination cities” and shying away from two races in compact countries, there is no room for sentiment. Better to be thankful that this quaint venue has made a temporary return this year, and fully savour the race when it happens in early November.

All in, 2021 marks a consolidation year for Liberty, one in which the technical and sporting regulations are being rolled over and a (much) reduced budget cap introduced, both aimed at reducing costs to ensure F1’s survival while providing a balanced mix of income, variety, entertainment and sustainability.

Next year’s calendar needs to follow that philosophy, or many sacrifices made by F1 personnel this year will have been in vain. The World Motor Sport Council meeting in December will prove whether Liberty succeeded in its objective, but the mere fact that F1 is bullishly targeting a 22-race calendar – including a debutant race – while Covid-19 continues to create chaos across the globe bears testimony to the sport’s robustness under their management.