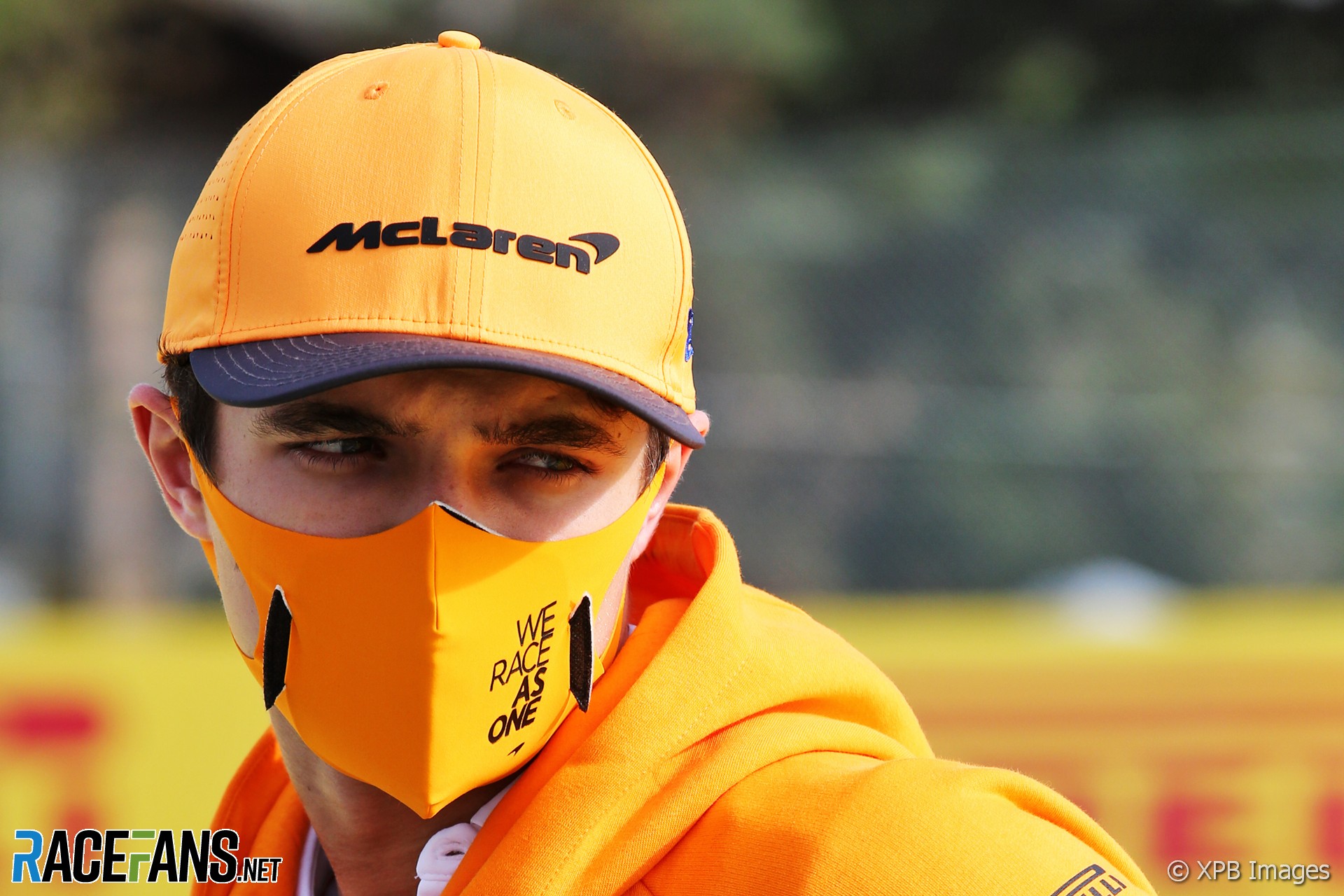 Lando Norris apologised directly to Lewis Hamilton in a message for his post-race comments following the Portuguese Grand Prix.

The McLaren driver said he also decided to issue a public apology in response to comments on his social media feed.

Speaking at the Autodromo do Algarve on Sunday, Norris said Hamilton’s record-breaking 92nd career win “doesn’t mean anything to me really”, that his rival is “in a car which should win every race” and only “has to beat one or two other drivers”. He later said his comments had been “stupid and careless”.

Norris also made other critical remarks about Lance Stroll at the same time, following their collision in the race. Speaking in response to a question from RaceFans, Norris said his apology addressed his comments about Hamilton.

“They were more the comments about Lewis and him reaching his 92 wins,” said Norris. “I have a lot of respect for [that] and I just didn’t choose that words to put it into context.”

As well as apologising publicly, Norris “also apologised to Lewis himself, I messaged him at the time.

“I don’t know if he knew about it at the time but I never mean to say something like that in a bad way or put any bad light on him at all. I respect everything he’s done to achieve what he’s done. It’s incredible no matter what.

“It’s just the way I put it was just not the way I wanted to put it across. I said what I said, I apologised and I’ve just got to move on.”

“I woke up in the morning and I looked on social media and there was a lot more bad comments than good about the things I said. I never mean any of it to be put in that way or taken out of context in a bad way, especially against Lewis.

“I saw how it was going down and I felt bad because it’s not the person I am to put shame on anyone or not have the respect for such a driver. So I made the decision in the morning to put out the tweet and just issue my apology and message Lewis also at the same time to set things straight.”

Before speaking to the media after the race in Portugal, Norris also apologised on his radio for swearing at Stroll following their collision.

“My first apology was more for the language I used more than anything,” he explained. “Not everything I said I apologised for but just the specific wording of what I said.”

Norris said he will try to take more care over his choice of words in future. “It’s not easy, everything can get taken out of context in some way,” he said. “Especially now in 2020 you have to be very careful with what you think.

“As much as I like voicing my own opinion, and that’s what I did in a lot of ways, I maybe just didn’t pick the right wording for everything I said. But I still have my opinions and some people are not going to like them, some people are, and that’s just the world we live in.

“At the same time there’s a lot of ways that no matter what you say, people can just take it into a bad context and publicise it in a way to make it look a lot worse than the way you meant it in the first place. It’s just how things are perceived nowadays can be taken both ways very easily and that’s just the world we live in in 2020.

“It’s not easy, you have to pick the right words, and that’s something I learned from last week. I probably will make a mistake at some point in the future and say the wrong thing again but I’ll try and do the right thing.”