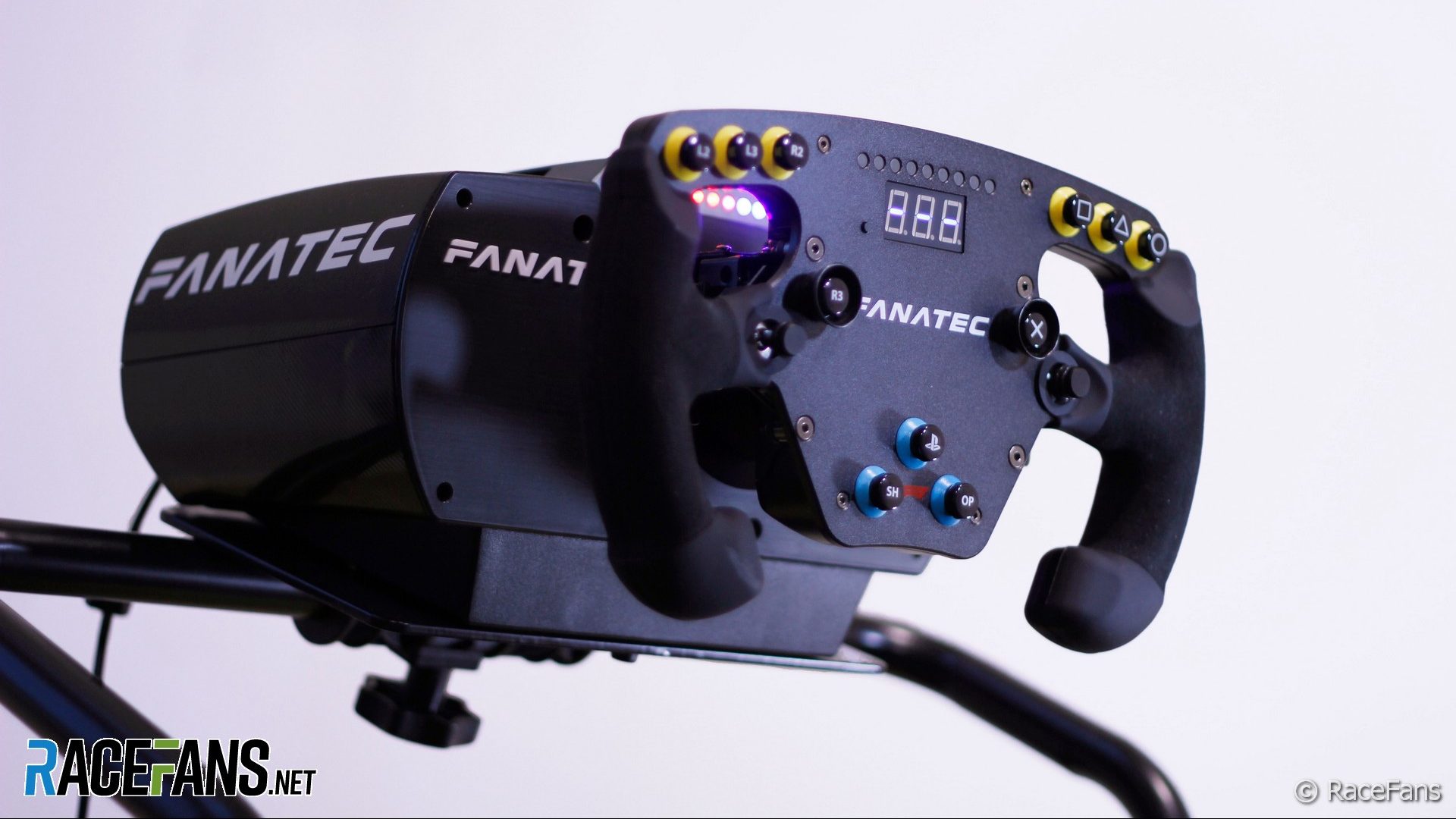 Back when Geoff Crammond’s Formula One Grand Prix was the gold standard in racing games, my eye was repeatedly caught by an advert in the back pages of Amiga Format for a prehistoric fore-runner of modern simracing steering wheels.

Most game controllers were digital at the time and racing wheels attached to computers weren’t seen outside arcades. But someone had the idea of offering aspiring simracers a realistic steering device – a foresighted piece of thinking when you consider what the market for such products is now worth.

The product they offered allowed you to repurpose your regular ball mouse (who remembers the perpetual need to clean the gunk off the rollers?) and use its analogue input to control racing games. By fitting the mouse into a contraption involving a Velcro strap, a rotating shaft and a steering wheel, you could theoretically achieve a finer degree of driving control than bashing the keyboard or bending your Competition Pro joystick.

Even as a nine-year-old I was sceptical how well this Heath Robinson set-up might actually work. I never saved up enough pocket money for one to find out.

Like the games, simracing hardware has evolved rapidly in the past three decades. A basic steering wheel and pedals set-up costs less than £100 today, though it may not be up to much more than a game of Mario Kart. Professional racers can drop four or even five-figure sums on systems much like those you might find in a racing team’s factory.

Falling between the two are the growing ranks of dedicated simracers, logging hours on iRacing and other painstakingly detailed simulations. The official Formula 1 Esports series, launched four years ago, has attracted a huge roster of incredibly skilled competitors who demand the best from their hardware.

German manufacturer Fanatec is the official supplier of racing hardware for the series. Its products are pitched at the upper end of the consumer market, offering premium-grade kit at price tags to match.

The CSL Elite F1 steering wheel and pedals set reviewed here – for PC and PlayStation, and Xbox One-compatible – is Fanatec’s entry-level offering for gamers, but it still retails at north of £600. Other manufacturers’ offerings, such as Logitech’s recently-launched G923, top out at £350. So what do Fanatec offer for almost twice the outlay?

The box contains a steering wheel base, a separate wheel, and a pair of pedals. Installation amounts to little more than a few minutes’ work, and the supplied cables are all of decent length – I’ve learned from bitter experience that a heavy piece of hardware on too short a wire is a recipe for knackered ports.

The first impression is strong. The ClubSport Formula wheel – stamped with the official F1 logo – feels solid with a reassuring heft to it. The grips are trimmed in comfortable Alcantara and can be swapped for different styles if you prefer.

Much of the wheel’s construction is customisable, yet no apparent concessions to build quality have been made. This extends to the switchgear, the caps on which can be swapped to tailor the buttons to suit your configuration.

Multi-directional switches fall easily beneath your thumbs, and the two closest buttons have thumbshields to avoid accidental presses. There are two gearshift paddles behind the wheel which, like the rest of the buttons and knobs, operate with a satisfyingly positive click.

Just like on a real Formula 1 car, the entire steering wheel can also be popped off and replaced for a different model. So if you’d like to sample another of Fanatec’s official wheels – the NASCAR or WRC examples, for instance – you can, even mid-game.

The wheel attaches to Fanatec’s Clubsport Wheel Base. This substantial (over 4kg) block houses a brushless servo motor and belt drive system to capture your responses and transmit the all-important force feedback. Belt-less direct drive systems are emerging as the new standard in this area, but cost over twice as much as this set-up.

The base can clamp onto a desk but note that depending on what yours is made from, the clamp may be strong enough to leave a mark on it. It also offers screw-in attachments for a range of simracing rigs, such as the Next Level GT Lite reviewed here previously (and seen in these photographs).

The kit is completed by the CSL Elite Pedals set. Again, the vital parts are all-metal, not plastic, and a selection of different grip surfaces are provided to suit your preference. A separate heel rest is included to which you attach the pedals using supplied bolts.

Steering wheels used to be a nightmare for game compatibility. That is a thing of the past for most major models, and Fanatec’s hardware is no different. From F1 2020 to WRC 9 to Euro Truck Simulator 2, the CSL Elite Pro handled them all with no difficulty.

Of course it’s not just the hardware that’s customisable, but virtually every element of the control software, including the extent of the wheel’s rotation (up to 1,080 degrees) and the strength of the force feedback. These can all be tailored from game to game, as you’d expect, and Fanatec’s website has a huge range of instructional videos to help you set your kit up to your precise requirements. If there’s any element of the set-up which doesn’t feel quite right to you, chances are it can be fine-tuned.

The first quality I look for in any piece of hardware is that it “just works”: You set it up once, and from there on it does its thing. The CSL Elite F1 has that quality in abundance, which is no less than what you’d expect at this price point.

It performs superbly as the interface between you and the racing world you’re trying to lose yourself in. If you’re trying to a wrestle an F1 car around 78 laps of a wet Monaco for two hours you want precision, comfort and – above all – repeatability in your inputs. No creaks, no dead zones – the CSL Elite never nags you with any shortcomings.

It is simply a joy to use. The steering action is reactive and smooth, and the force feedback delivers a convincing mixture of textures with jabs and shudders which communicate the kerbs and bumps to your palms. If you pushed me to offer a criticism, I’d like a little less travel in the gear lever switches, but I’d be deluding myself if I pretended that minor detail is what’s costing me several seconds per lap to the Esports aces…

The CSL Elite F1 is use-able with a sufficiently sturdy desk and a solid chair. However if you plan to simulate grand prix distances then a proper rig or wheel stand is a worthwhile consideration. If you intend to add the load cell braking kit for an extra £120 – a popular option – it’s virtually mandatory.

The load cell kit replaces the normal brake pedal, which can then be repurposed as a manual clutch (there’s ample room for it on the heel rest). The upgrade offers a much more realistic braking sensation, as it uses the pressure you exert upon the pedal to determine your stopping power, rather than its degree of movement. It will take up to 90kg of pressure.

As you’ll have guessed, this is also customisable, and three different grades of Elastomer spring are provided to offer different levels of hardness. It is definitely worth spending your time tuning the brake force value and experimenting with the different springs until you find a set-up which suits you.

In all aspects – materials, construction and movement – the quality of the hardware is extremely difficult to fault. There’s no flimsiness, no give, just that satisfying feel of refined engineering which is clearly the end product of careful thought and design.

A roller-ball mouse and a steering wheel on a stick was as good as it got 30 years ago. The game has moved on a long way since then. The CSL Elite F1 offers a supremely convincing and almost infinitely customisable driving experience. Simracing enthusiasts who can afford it shouldn’t consider anything less.

The Fanatec CSL Elite F1 steering wheel and load cell brake pedal were tested using the a selection of hardware and software including:

Read all RaceFans book, game and other reviews