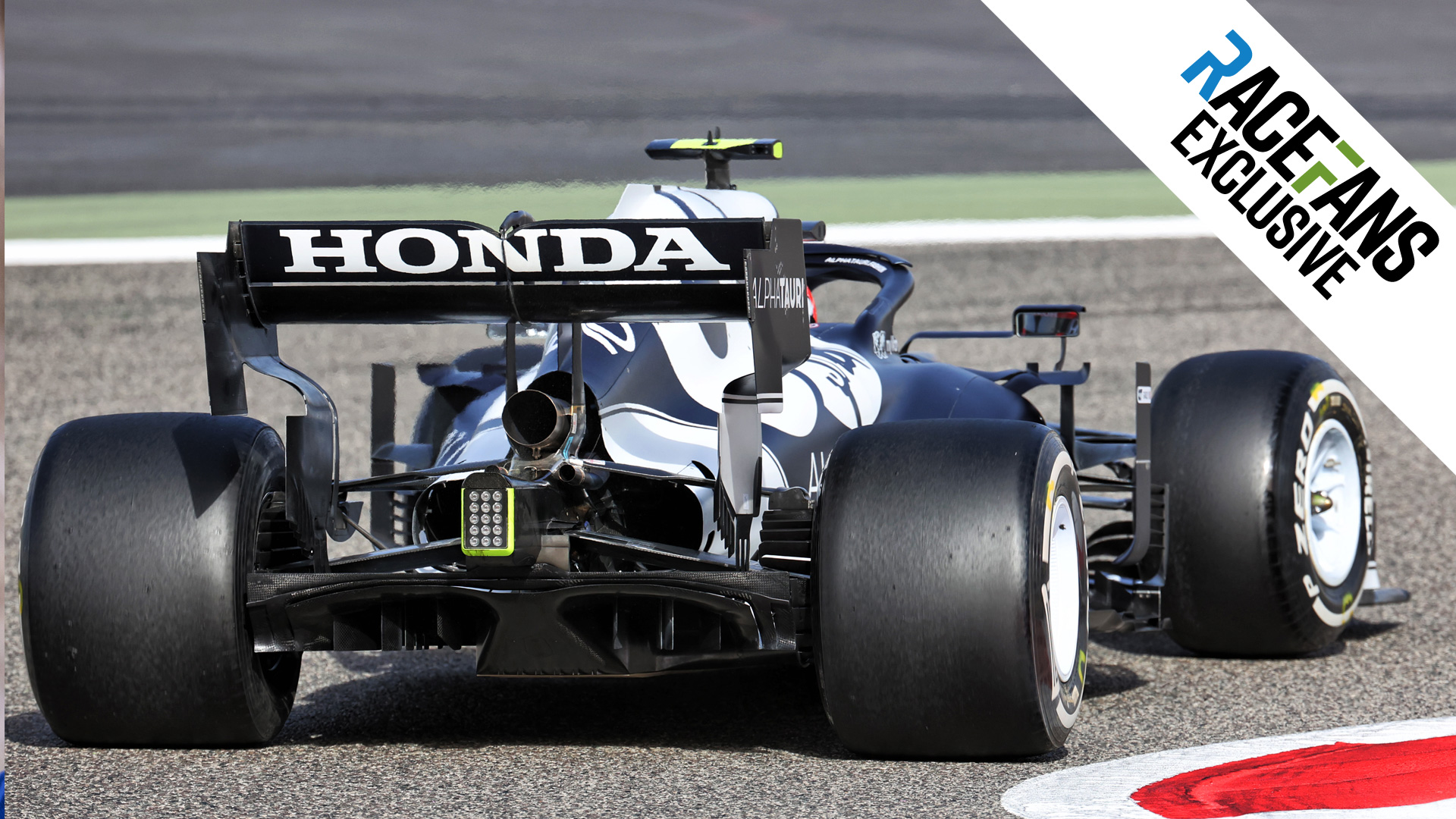 Much has changed at the team heading into the new season. The AT02 has been reworked as far as F1’s restrictive regulations allow. For the first time the team has benefited from testing its developments in a larger, 60% scale wind tunnel, bringing it into line with the rest of the grid.

Alongside Gasly, Yuki Tsunoda arrives to make his F1 debut. While he enjoys the backing of engine supplier Honda, he is also a Red Bull junior driver, and his superb performance in Formula 2 last year underlines his credentials.

But while the team heads into the new season with an upgraded Honda power unit, it also does so knowing the Japanese manufacturer’s support will end after it delivers its next engine in time for the 2022 F1 season.

Like all teams, AlphaTauri must balance its development programme for the year ahead with the need to prepare a car to a totally different set of regulations next year. Technical director Jody Egginton spoke to @DieterRencken about the challenges which lie ahead of the team in 2021.

RF: Have Formula 1’s new regulations for 2021 had the desired effect of slowing the cars down?

Egginton: “In terms of regulation change, it did pretty much what was advertised as doing its job to cut around about 30 points of [downforce] load off, which we’ve got to recover.

“But that was not a surprise because the discussion about which parts of the car were going to be modified was debated at length in a very good way. So everyone was doing their homework, providing feedback.

“We arrived at a solution and in our case it’s pretty much as advertised and we’ve been working hard to recover it. We believe we’ve done a good job of recovering, obviously similar to the majority of teams. We’re flat-out trying to correlate our wind tunnel results and CFD results on-track.

“We’ve also changed wind tunnel over the winter so for us it’s a further variable, which is why it’s probably a bit more homework to do to understand exactly where we are now. Our launch car was developed in our Bicester wind tunnel and now we’ve moved to the Bedford wind tunnel. We’re going to be developing the car in the tunnel so there’s baseline-ing needed.

“So to answer your questions, we’re busy gathering data now but first thoughts are that we’ve recovered most of what we recovered.”

RF: Out of those 30 downforce points which have been lost, how many do you believe you have recovered?

Egginton: “There’s a headline number. We say we recovered most of it but it’s far more complex than that. There’s an awful lot of metrics which define what your aero is and the amount of recovery across the speed range varies a bit. In some areas it probably covers all of it.

“But [we’ve] got to go through the numbers, really, see what we measure on track. I know what CFD tells us, I know what my wind tunnel tells us. I think we’ve pulled most of it back. But then on top of that there’ll be work to do on specific sensitivities and recover some particular characteristics of the car that’s potentially been damaged.

“So long story short, at this moment, I’ll commit to saying we recovered most of it, but we’ve got to do some number crunching to see exactly where we are.”

RF: Can you expect to have a better season than you did in 2020?

Egginton: “We’re always developing towards that but the added variable here as well is that we’ve got a large 2022 project to work on and resources split across two projects and every team will make that decision [when to focus on one].

“In a normal season like last year where we developed quite aggressively through the year, you’ve definitely got a better opportunity to move forward than if you decide to put more resources into 2022. So it’s an ongoing discussion. But at the moment, the thought process is to put a lot of effort into the new [2022] car. So that will impact how far we go with this car.”

RF: What difference will the change of wind tunnel have on your ability to make development gains?

Egginton: “We were the last team on the grid using a 50% model in a tunnel that was only capable of running at 50%.

“A model of 60% gives you more benefits. The increase in scale is a benefit so it was a logical thing to do. We were not unhappy with the tunnel we were in, but we believe there’s opportunities in working at 60% and we’ve explored those.

“The financial side of it doesn’t really come into play. We have our budget and we use it in the best way. But that wasn’t a driver. It was let’s get to 60%, see what opportunities it brings.”

RF: Did testing expose any particular problems with the AT02?

Egginton: “In all honesty, so far, nothing that was completely ‘wow, we never thought of that’. The car’s a strong evolution but the basic concept of the car is the same.

“We’re carrying over the same power unit so that’s a known quantity. There’s development there but we know how that piece of equipment works and we understand the development. The rear end of the car is carry-over so our philosophies on that part of the car is understood.

“The tyres are slightly different, but we can deal with it, we always try to give ourselves options to be able to run the tyres in the window that we want.

“At the front of the car, the aero concepts that we bought seem to be delivering on what we expected. The key now is to understand that fully and then try and develop the next step.

“Some of these changes give us more development potential in the year. We’ve not put the car enough down the road yet to fully understand what we need to be doing there in detail. But the basic changes we’ve made to the car seem to be delivering on a macro level what we expected at this early stage.”

RF: AlphaTauri has previously operated below the financial limit imposed by the new budget cap for 2021. Will you now increase your spending to reach that level?

Egginton: “I think everyone wants to maximise everything they’ve got. Our challenge is to make sure that what we’ve got [works] and we push the commercial guys [and] they are working as hard as they can to get us to that point.

“But like everything else, you react to the situation. If we find something that tells us we want to do something different, we’ll do it. The key point is you’ve got to maximise that spend.

“So we’ve got the 2022 car, we’re focussed on that this year as well. It’s a little bit different because there’s a lot of homework to be done there and you have to allocate budget to it. So ’22 to ’23 will be different: You’ll be focussed on one project and back into a normal development cycle.

“For this year, it’s a little bit different. We’re very focussed on getting the maximum out of the budget and the fact that we’ve got a budget cap that we’re really focussed on making sure that every Euro we spend is spent in the right area and we’re minimising any mistakes or inefficiencies. So that’s focussed every team on that, I’m sure.

“The more money we have in the pot, we still have to make sure we spend it as best we can, really. But the position we’re in, anything we get we will try to make better use of.”

RF: At what point will you shift your focus entirely to the new car for 2022?

Egginton: “Like every other team, there’s an awful lot of work going into it. Obviously from January 1st we could get going with aero work again and we’re balancing that resource and we’ve got a bit of an outline plan of how we want to migrate.

“But it might be that we learn something along the way that tells us, okay, let’s push a bit more resource this way or a bit more that way permanently.

“In all honesty we’ll get to Bahrain for the race, see where we are, make an assessment and then review again. It’s a constant review process.

“But at the minute there’s a significant amount of resource focused on 2022 with huge car design [work] because there has to be. We’re still working with the regulations in this feedback loop and understanding which way they’re going.

“I’ve heard some people say they’ve already fully focussed on 2022. We’re not but it’s a constant review as to which way we want to go.”

RF: Will you focus more on 2021 if you start the season strongly?

Egginton: “It’s a cliche but there is short, medium and longer-term goals. Our challenge is to be a regular top-five team. We’re on the road to that but we didn’t achieve it last year. We weren’t regular. There were races where we couldn’t get the best out of our package. So there’s still something to do there.

“But achieving that just for this year at the expense of next year is foolish. So we’ve got to say, OK, we’re on the road to that, we’ve got the objectives, but we want to make it sustainable.

“A fantastic year this year and then absolutely terrible next year is unacceptable. So there’s this balancing act and in all honesty, we won’t know exactly and no team will know exactly where they are until Saturday in Bahrain and they go ‘right everyone’s got the gloves off now’.

RF: Have Honda provided a good performance step from their latest power unit ahead of their withdrawal from Formula 1?

Egginton: “It’s been a good step. Honda have worked on all fronts. There’s no sign of them doing anything different other than what they’ve always done. They’re pushing the performance envelope and there’s some promising signs. I’m not going to sit here and give you exact figures and things, but it’s a good step.

“To see exactly where we are, probably we won’t know until next week. But from the data we’ve got and the tests we’ve done, we see it is a good step. What I can’t comment on is what the others have done. You can do a fantastic job but if someone does a more fantastic job, then all of a sudden your development’s not so good.

“So it’s a good direction. It’s fantastic working with them and there’s no sign of anything other than them being flat-out to maximise everything.”

8 comments on ““Honda are flat-out to maximise everything”: Q&A with AlphaTauri’s Jody Egginton”