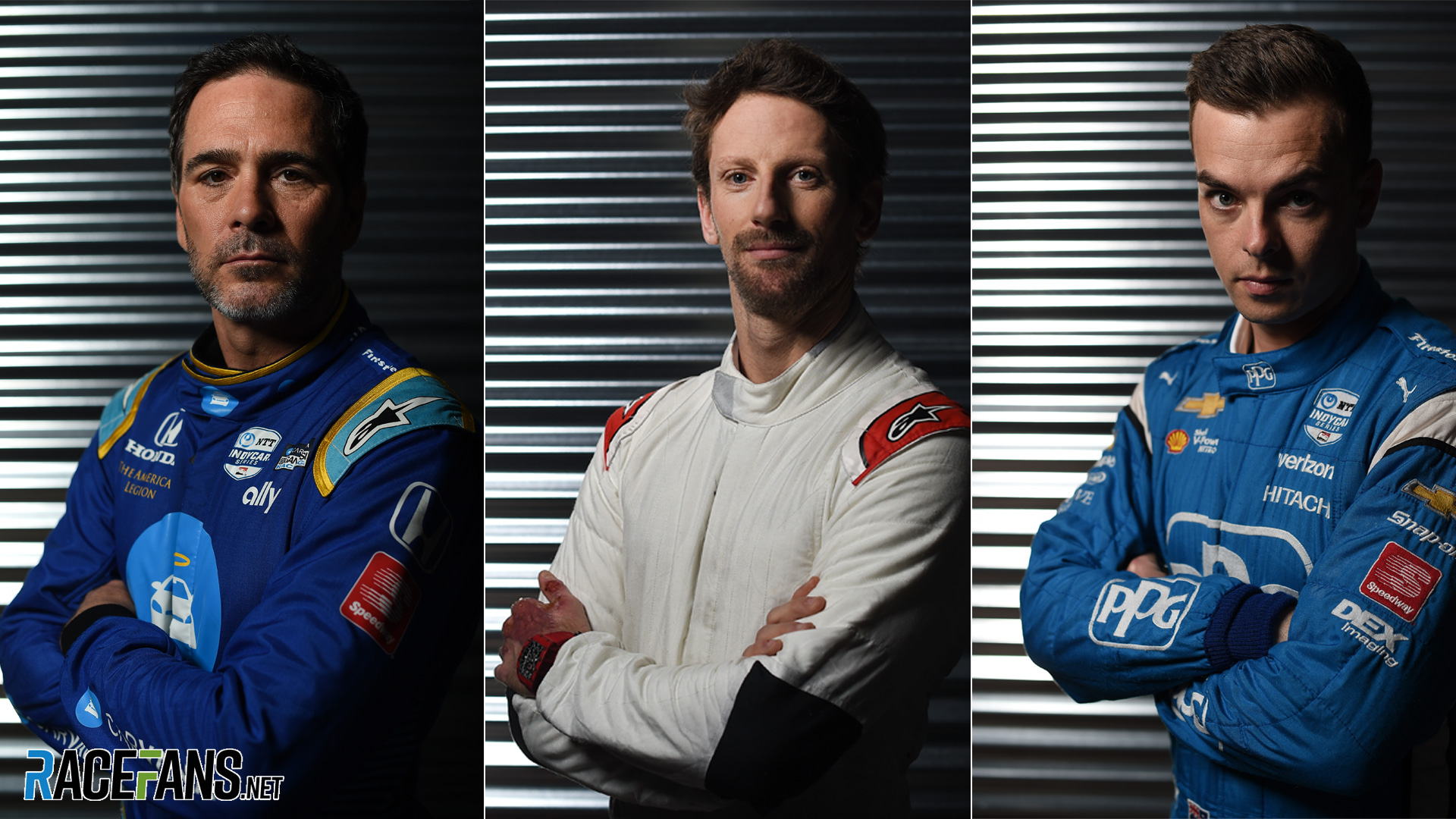 IndyCar has attracted a roster of rookies any championship would envy for its 2021 season, which begins in Alabama this weekend.

“Someone put out quite a good tweet that the rookie class where it’s like a three-time Supercar champion, seven-time NASCAR champion, then a guy who is a veteran of Formula 1 in their first season in IndyCar. It just shows what IndyCar is all about right now. It’s exciting times for the category.”

Luring NASCAR star Johnson, whose seventh title win five years ago saw him tie Richard Petty and Dale Earnhardt as the sport’s most successful driver, is a particular coup for the championship. IndyCar has long been in the shadow of stock car racing in the American market.

Johnson will appear in a Ganassi machine bearing his familiar number 48 at the road and street rounds only. Despite his gigantic experience of oval racing, the veteran of almost 700 NASCAR races is avoiding IndyCar’s three speedways for the time being on safety grounds.

However, following the introduction of the Aeroscreen last year, he has indicated that may change in the future. Johnson said he had a “childhood dream to be an IndyCar driver” but “my opportunities took me elsewhere”, so the lure of the Indianapolis 500 may, in time, prove too strong to resist. In the meantime Tony Kanaan will pedal his machine on the ovals.

IndyCar’s other tin-top convert, 27-year-old McLaughlin, arrives with three consecutive Australian Supercars titles to his name. He already had a chance to dip his toe in the water with Penske at the final round of last season, and contest all 17 rounds.

While Johnson and McLaughlin’s IndyCar moves have been in the works for some time, Grosjean only learned late last year his services would no longer be needed by Haas. While he is far from the first driver to have turned to IndyCar because he’s run out of F1 options, he is also eagerly anticipating the chance to score his first single-seater victory for almost a decade.

Grosjean, however, has a tougher fight on his hands than McLaughlin or Johnson. They have landed plum drives at IndyCar’s powerhouse teams. Since the current DW12 chassis was introduced in 2012, Ryan Hunter-Reay’s title win that year was the only one scored by a driver from outside Penske and Ganassi.

Grosjean’s Coyne team is dividing its efforts between his Rick Ware-run car and a full-time entry for Ed Jones backed by Vasser-Sullivan. While Coyne have won races in the past, most recently with Sebastien Bourdais in 2018, and victories in IndyCar are shared more evenly between the teams than they are in F1, Grosjean hasn’t walked into a team which can expect to be regular contenders for victory.

It’s clear Grosjean sees this as a trial year to discover whether IndyCar is something he wants to commit to in the longer-term. He has a young family, which has just witnessed him survive one of the most shocking F1 crashes of recent seasons, and he may not want to commit to racing on the other side of the Atlantic in an even riskier series than F1.

That said, before his Bahrain crash Grosjean was already considering the possibility not only of racing in IndyCar, but taking on the ovals too. With just four of this year’s 17 races taking place on ovals, the risks involved have arguably diminished, though three of those rounds will take place on the fearsomely quick superspeedways at Texas and Indianapolis. As it is, Pietro Fittipaldi will substitute for him at those races, though Grosjean is already considering whether to enter the race at Gateway.

Regardless of the equipment at their disposal, all three newcomers are about to discover how competitive IndyCar is. The highly-rated Felix Rosenqvist, another recent arrival from Europe, took two years to win at this level at Ganassi.

“I wish I could talk to myself now back in ’19,” he says of his debut. “It’s a tough series. I haven’t done anything else that is as difficult. I know many other people that came from F1 say the same thing.

“You look at it from the outside, you think it’s going to be like a simpler form of racing. But the simplicity is actually what makes it hard. There’s not so much to do on the cars. The tracks are pretty rough and brutal physically, and on the cars. Driving style-wise, it’s pretty raw.

“Coming in from F1, for Romain, or Jimmie in NASCAR, I think it’s going to be very different and very tough. But I believe all of them, they’re winners. They will figure it out eventually. I think even Romain has looked really quick in testing, as well.”

The changes don’t end with the physical differences between the cars. American motor racing rules are subtly but significantly different to those Grosjean is used to.

“The whole racing part of it is super different with yellow [flags]. We don’t have blue flags, you have to take into consideration all the lapped traffic. That’s a big thing that I had to learn when I came here in ’19.”

Rosenqvist has switched from Ganassi to McLaren SP for his third year in IndyCar. This is the second year for the alliance between the F1 team and former Schmidt-Peterson IndyCar squad. Although they fell short of winning a race last year, they did score three second places and a pole position, and took Patricio O’Ward to an impressive fourth place in the standings. O’Ward has high expectations of what the team can do in its second year.

“Last year was such an odd year, not just for motorsports but just in life in general,” he says. “You had to be very flexible with schedules.

“Last year was actually the first year, especially McLaren, had an insight of what IndyCar is like and where you can gain or lose a lot of time. I think that’s where I hope this year we see some big improvements, because to be completely honest with you, last year we raced with 2019 cars. There was nothing different. It was identical to what the team had learned in 2019.”

Intriguingly, McLaren SP were seen running F1-style aerodynamic rakes on their prescribed Dallara chassis in testing, as they seek to break the Penske-Ganassi hegemony in IndyCar.

“I have lots of faith that all those guys behind the computer doing all the analysis and the developments – it can be a road course, street course, superspeedway for drag, aero, whatever it may be – I feel like in this off-season they had a direction and they had more of a clear picture of where they had to work, to work at or see where there was massive improvements to be made,” says O’Ward.

“Hopefully this year we’re going to see it. I don’t know what to say because I don’t see all the stuff that goes behind the scenes. But I know there has been a lot of just hard work and trying to find anything that they can to make the cars go better, make my life easier, and then it’s my turn to return it in results this year.”

In the heavily disrupted 2020 season, Dixon shored up an early lead but saw it whittled away by Newgarden as the year wore on. Dixon’s final tally of 537 points from 14 races saw him beat Newgarden by 16 – but the Penske driver took a whopping 117 out of him over the final six rounds.

While Dixon may have enjoyed a slight competitive edge from his Honda engine – notably at Indianapolis, where he was unlucky not to win – Newgarden believes Chevrolet have edged closer during the off-season. “It looks a lot more even this year,” he said after testing at the famed oval last week.

“Someone could obviously be miles ahead by the time we get to the month of May. It’s possible. But I would say it looks a lot more even right now than where we were at last year.

“We’re all excited about that. I think Chevrolet has done a great job. It’s going to provide an interesting show for everybody.”

IndyCar may well be the Penske and Ganassi show once again. But between their new star drivers, an intriguing international signing and the rising power of McLaren SP, the scene is set for another thrillingly close season.

The pandemic forced IndyCar to trim its calendar back to just 14 races last year, most of which were held in the Mid-west. The effects of Covid-19, which has killed more people in America than anywhere, can still be seen in IndyCar’s its revised schedule for 2021, which features an extra visit to the Indianapolis road course in the second half.

The only street track IndyCar visited last season was St Petersburg. It will return to the Florida venue next week, having postponed what would have been the season-opener. Long Beach’s race has been moved back much further, and now has a highly unusual September slot which will close the season.

A new race on the streets of Nashville will join the calendar in August. However oval races, which have struggled to draw crowds away from the centrepiece ‘500’, have dwindled to just four, including a double-header in Texas.