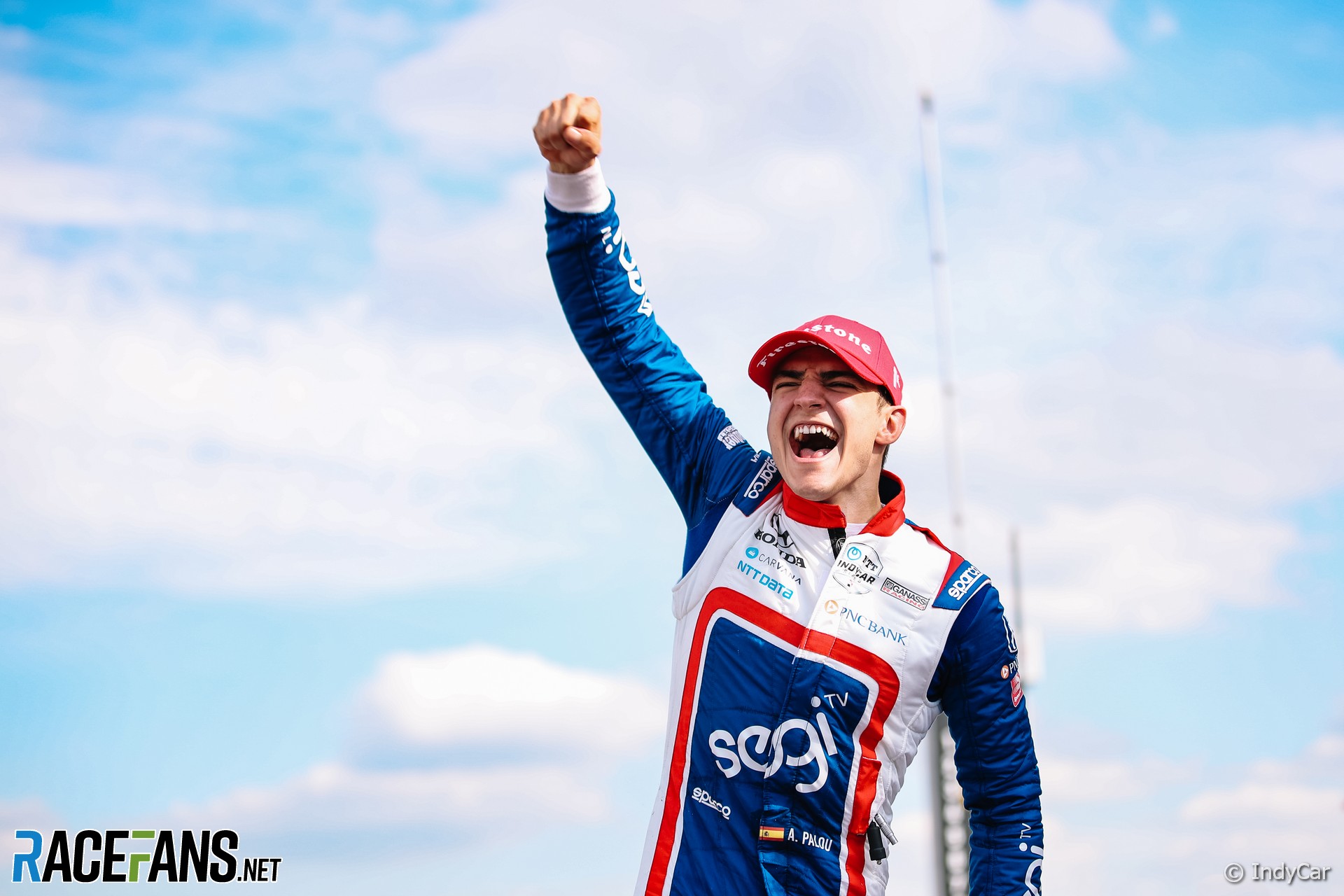 Alex Palou claimed the first IndyCar win of his career in his first race for Ganassi as the 2021 championship began at Barber Motorsports Park.

The new season got off to a spectacular start as several major names were involved in a crash on the first lap. It was triggered by Penske’s Josef Newgarden, who spun over the crest of turn six and was collected by Andretti’s Ryan Hunter-Reay.

Colton Herta was also taken out on the spot, while McLaren’s Felix Rosenqvist rode over the top of Carlin’s Max Chilton. The latter pair were able to return to track several laps down, before McLaren eventually opted to retire Rosenqvist’s car.

After the restart McLaren SP’s pole winner Patricio O’Ward led the first stint of the race in a tail-happy car until pitting on lap 18 of 90, swapping his fresh set of red alternate tyres for a used set of primary blacks and committing to the three-stop strategy. The drivers trying to complete the race on two pit stops stayed out at least 14 laps longer and during this time O’Ward lost time in traffic as new race leader Alex Palou got faster as his fuel load decreased.

When Palou made his first stop on lap 31, also going to used blacks, he returned to track ahead of O’Ward. But with his tyres not up to temperature, and O’Ward now freed from the drivers he had been stuck behind, the gap between the pair quickly shrank and O’Ward got his move done exiting the turn five hairpin.

Soon after that O’Ward was back in the lead as Foyt’s Sebastien Bourdais and Ed Carpenter Racing driver Rinus VeeKay pitted for a second set of fresh blacks. While O’Ward now looked far more comfortable on his tyres he was about to get rid of them in place of fresh blacks and another drop down the field.

This time the traffic wasn’t a problem, but instead the difficulty of getting his tyres up to temperature hurt O’Ward and he lost places to Bourdais and VeeKay. Palou then filtered back into the lead with a 10-second advantage over Penske’s Will Power.

The victory fight was now between the drivers going for two stops. Ganassi’s Marcus Ericsson was the first of those to pit with 30 laps to go, opting for another set of blacks. Encouragingly for his team mates, he got the tyre up to speed quickly and cleared O’Ward when the McLaren driver made his third stop on lap 66, just four laps after Ericsson’s team-mates Palou and Scott Dixon.

Much of Palou’s advantage was slashed by an incredible in-lap and rapid pit stop by Power, meaning the two were just a few seconds apart going into their final stint and with a further 10 seconds back to O’Ward who eventually got back past Ericsson as he started to fade.

The front-runners began driving to their fuel targets to ensure they didn’t run their tanks empty before the finish. But the appearance of lapped cars added excitement and enabled Power to get closer to Palou in the late laps.

Dixon finished third, while O’Ward’s strategy only converged with his two-stopping rivals in the closing laps and he finished fourth.

Bourdais and VeeKay were next as they passed Ericsson, and Rahal Letterman Lanigan’s Graham Rahal did the same with a few laps to go to earn seventh despite only running three laps on his red tyres at the start of the race.

Ericsson finished eighth, but only just as he ran out of fuel after the chequered flag, ahead of Andretti’s Alexander Rossi who qualified second but didn’t have the race pace to match.

Former Formula 1 driver Romain Grosjean was one of those who attempted the harder two-stop strategy in his first ever IndyCar race, and the Dale Coyne with Rick Ware driver was one of the front-runners in the first stint after qualifying seventh. His later stints weren’t quite as impressive though, and he faded to 10th place.

The next best rookie was Penske’s Scott McLaughlin in 14th, while seven-times NASCAR Cup series champion Jimmie Johnson struggled to adapt to single-seater racing in his Ganassi-run car and finished several laps down as he tried to avoid trouble.