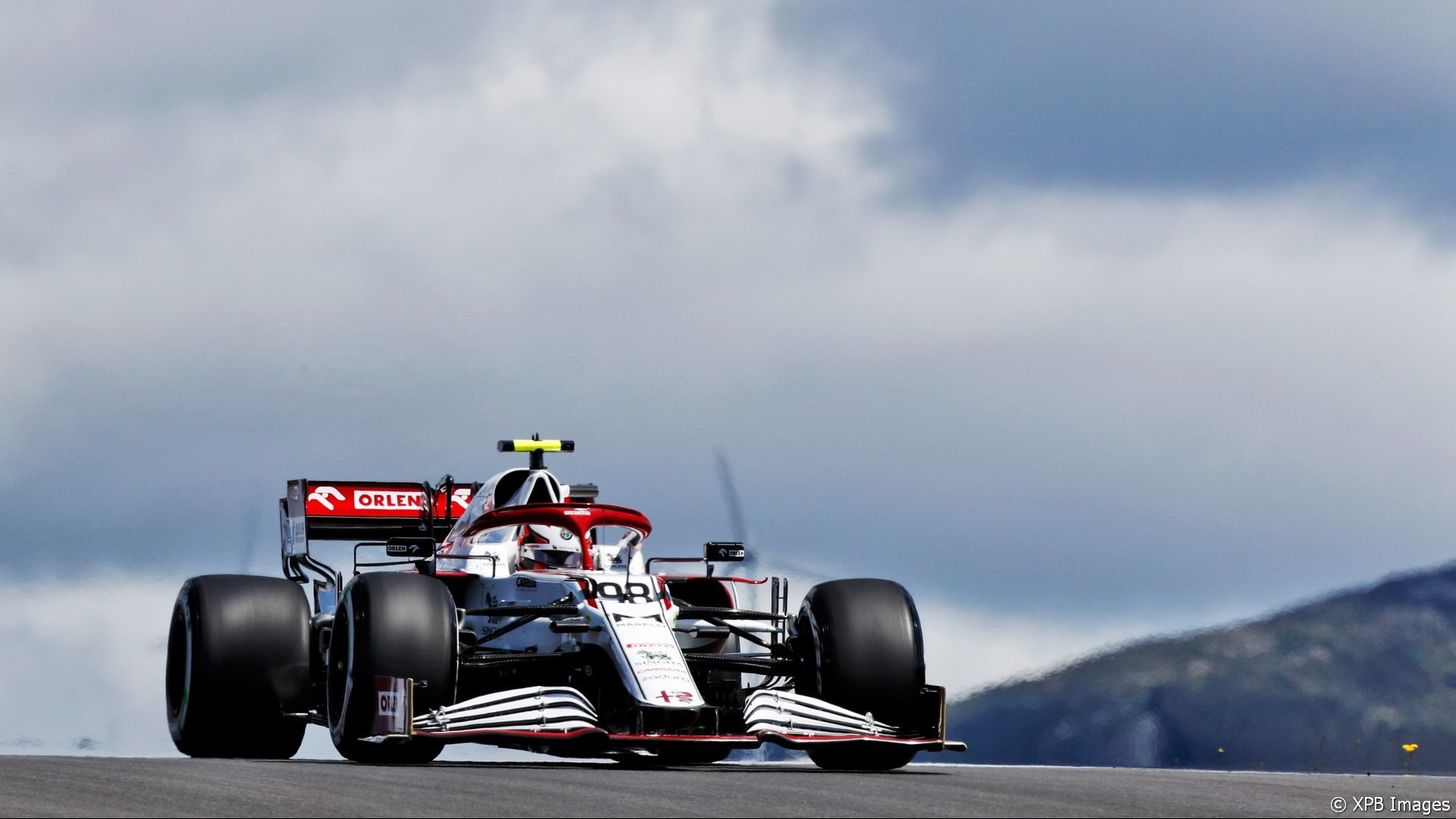 Callum Ilott said his first official F1 practice run at the Portuguese Grand Prix was productive, despite a wobbly crash helmet which looked like “the Churchill bulldog”.

Ilott said his practice experience was “not so easy to start with” at the Algarve circuit, which several drivers reported felt slippery on Friday.

“I think the track was very similar to last year in the characteristics and some of the difficulties,” said Ilott.

“On that side, I think it caught us out a little bit in the beginning. Obviously, for me I was still taking it easy as well, so it was interesting to experience it.”

Ilott was pleased with the progress he made in narrowing the gap to team mate Kimi Raikkonen, but admitted he could have pushed harder on the soft tyres.

“Once I was up to speed a bit with the tyres, getting used to it, I think I finished the run on the hards one tenth off Kimi, which wasn’t too bad at the time.

“Then we went to the softs and I completely got caught out at the beginning by how much grip and also getting the tyres in. So yes struggled a bit then. But then we came in, rebalanced and I think with the tyre mileage I had, I didn’t do a bad time.”

Ilott said that adapting the car’s set-up was the main part of the challenge, “I was struggling a little b-it with the balance, I think it was quite oversteery, so obviously I was waiting for the team to give me the information on that side.

“We had to make quite a few changes, we tried to keep it as simple as possible, but the conditions were a bit more sketchy in some areas than expected.”

Ilott is shorter than Antonio Giovinazzi, whose car he took over, which created some unexpected aerodynamic effects on the straights as the buffeting blew his crash helmet around.

“It was a little bit on the wobbly side,” he admitted. “Reminded me of the Churchill bulldog. It’s quite hard to get the balance and obviously the helmet is used a lot to redirect the air and maybe the positioning with me is a bit different to Antonio, but it was only really in the top speed where it was doing it. I was a bit uncomfortable but we’ll make some changes for next time.”

Ilott said that the session had allowed both him and Alfa Romeo to get important information about the car, for any future running as well as his simulator work. “Overall we were building the consistency and I was very happy with the session, got through all the run plan that we needed to and discovered the limitations that we had as a team and as a driver as well. So overall lots learned from my side and I think lots learned from the team.”

The Portuguese Grand Prix is Ilott’s first official weekend session, despite having been entered for first practice in the Eifel Grand Prix at the Nurburgring last year. The pit lane was never opened during that session, due to low-hanging cloud that limited the medical helicopter and Ilott was forced to wait until the young driver’s test in Abu Dhabi for another opportunity.