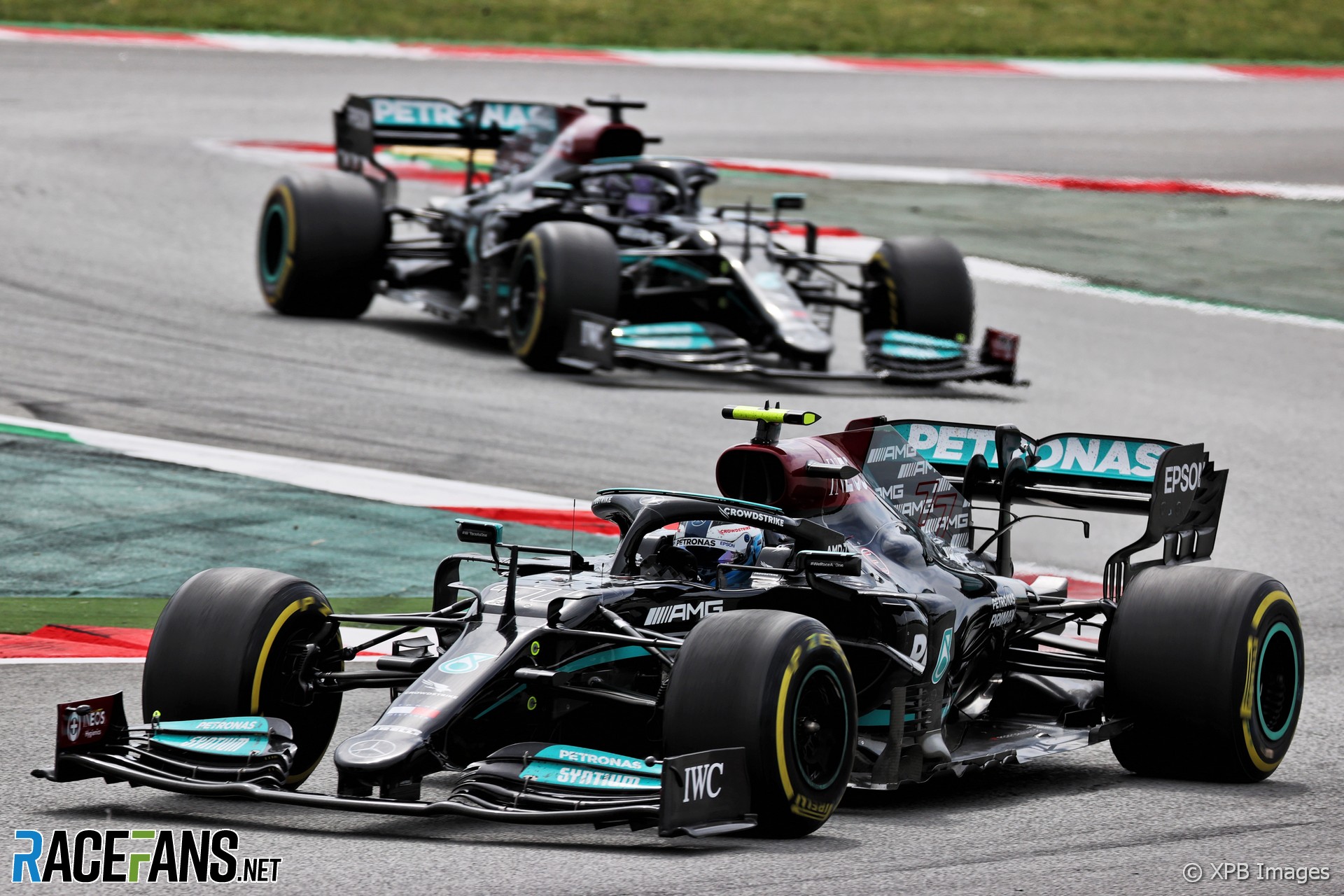 Valtteri Bottas admitted he could have reacted more quickly to Mercedes’ instructions for him to let team mate Lewis Hamilton past in the Spanish Grand Prix.

Hamilton was on fresh tyres than his team mate and chasing race leader Max Verstappen when he closed on Bottas.

The team advised Bottas several times Hamilton was closing and told him not to cost his team mate any time. Bottas did not defend his position when Hamilton passed him into turn seven on lap 53, but Hamilton lost around 1.3 seconds on that lap compared to the laps before and immediately after the move.

Despite temporarily slowing his team mate’s pursuit of victory, Bottas says he was more concerned with not compromising his own race.

“I definitely could have let him by earlier, but I was doing my own race as well,” Bottas told Sky. “It’s always calculating things.”

Bottas had passed Charles Leclerc earlier in the race and was pushing to build up a lead over his rival so he could try to score the bonus point for fastest lap.

“I was trying to get Charles off my pit window so I could stop again and try and go for the extra point. So the main thing in my mind was my own race.”

Bottas says he was only instructed not to cost Hamilton too much time while he made his way by the second Mercedes.

“They told me not to hold him up too much,” says Bottas. “But like I said, I was also doing my race. And I’m not here to let people by, I’m here to race. So that’s how it goes.”

Hamilton eventually caught and passed Verstappen on his way to victory.

Bottas secured the final position on the podium, 10 seconds behind Verstappen at the chequered flag. He admits that being passed by Leclerc around the outside of turn three on the opening lap frustrated any chance he had of challenging the leading two ahead.

“Definitely the main thing for me in the race was losing place to Charles on lap one. Going into turn three, Lewis lifted quite a bit, so I had to also lift and to be honest, I didn’t see Charles outside. So when I saw him, it was too late.

“That really compromised the first stint of the race. It’s a shame because otherwise I felt the pace was pretty strong.

“Lewis showed, obviously, that he could win the race and I don’t think our pace was that dissimilar. So it’s a bit of a shame. But here the track position is so, so important. It’s so, so tricky to follow and pass.

“So I knew when I was P4 that it’s going to be tricky. But at least we made it back to the podium and outscored Red Bull.”

81 comments on “Bottas says he could have let Hamilton past sooner: “I’m here to race, not let people by””