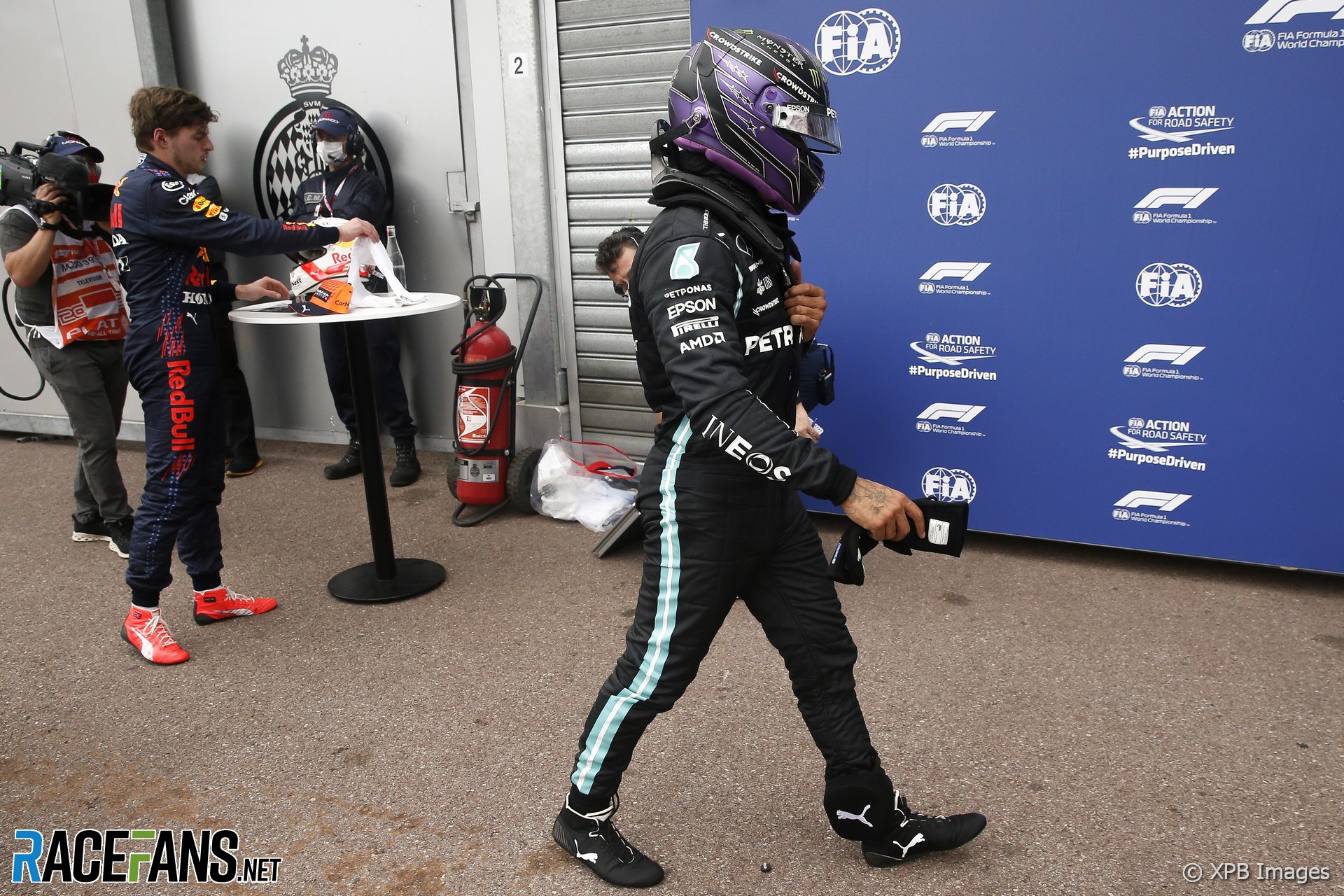 Lewis Hamilton says he will have “tough discussions” with his Mercedes engineers over the set-up direction the team took for the Monaco Grand Prix.

The world champion will start tomorrow’s race from seventh on the grid. The team appeared to have better pace on Thursday in Monaco, and Hamilton believes lower temperatures at the track today contributed to their loss of performance.

“It wasn’t feeling bad on Thursday,” Hamilton explained. “I think we had slightly better pace, we were closer to the front on Thursday, But [we’ve] not gone in the right direction over over the last day, and then today was the result of that.”

“Today was a question of tyres,” he added. “The tyres just stopped working so you’re just sliding around.”

Hamilton remarked on the deficit to their rivals after his first run in final practice as the team realised its set-up changes had not worked as intended. Further alterations did not help the situation, said Hamilton.

“There was lots of changes that we did to the car after FP3 because FP3 was a disaster. And that’s from the work that’s been done over last day or so. It’s a completely wrong direction, [we] completely missed the ball.

“We then made some changes to try and take steps backwards and move the car to a different place. And the car was worse than ever. So I think we really lost our way from Thursday.”

“The Ferraris obviously and Red Bulls definitely have better capability in getting their tyres working,” he said. “And we as a team didn’t do a good enough job in providing us with opportunity in order to do the same.

“Of course it’s frustrating because then it leads you down a path, which there’s no gains in that direction. On Thursday it was better with higher temperatures today is a lot cooler and I paid the price of that.”

Falling to seventh on the grid at a circuit where overtaking is notoriously difficult is “a little frustrating”, Hamilton admitted. “I don’t want to be critical of the team, but behind closed doors, I will be. And we’ve got to work harder.”

“There will be some tough discussions that we’re going to have, that I’m going to have with my engineers,” he added. “Tonight, or maybe after the weekend, because there’s things that should have been done and haven’t been done and we’ll learn from it and we’ll come together stronger in the next race.”

“First of all, we want the drivers also to speak their mind, and there was a lot of frustration when you’re finishing P7 in Monaco. Pretty much that’s the end of potential, the end of the of the week.

“Then venting your frustration is absolutely okay. Nobody in the team takes this the hard way because we express it the other way around, too.

“He is the first one to acknowledge and to apologise when things go wrong. He’s done that in public and privately. And as a group, I think that’s one of our big assets that made us champions in the past, that we are able to take it on the chin.”

The team has already begun debriefing on how to improve their approach with the car on cooler days.

“There was one particular aspect of tyre heating that we discussed this morning and on Thursday night where we could have taken a different direction, a direction that [Hamilton] was interested to pursue that we didn’t. And that was exactly the content of our discussions now, how can we go into an exploration mode when we expect much colder temperatures?”