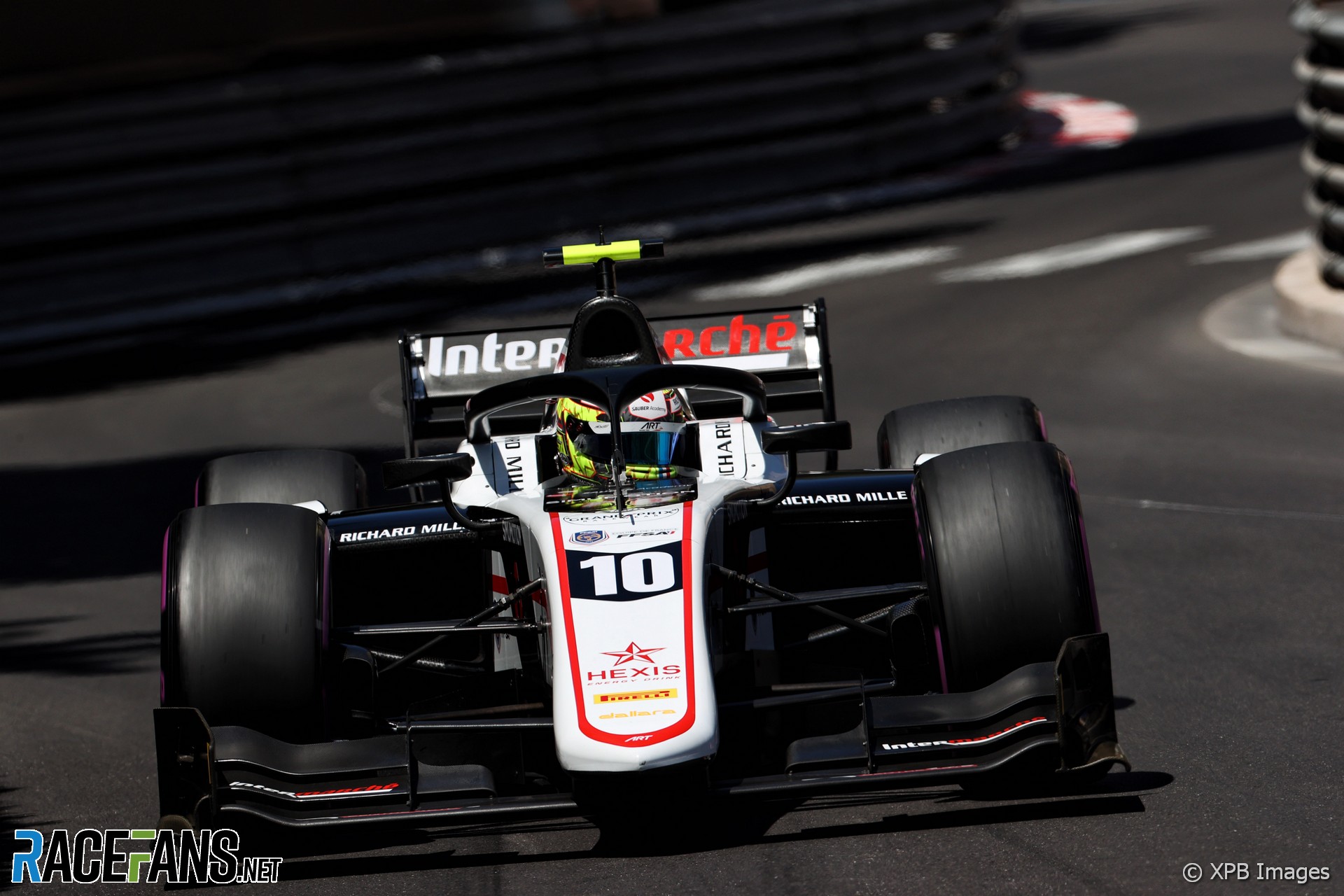 The 17-year-old qualified on pole, taking it in spectacular fashion on Thursday with almost half a second over any other driver. Robert Shwartzman joined him on the front row with his Prema team mate Oscar Piastri in third. Dan Ticktum, who inherited this morning’s sprint race win following Liam Lawson’s disqualification, lined up next on the second row.

As Jack Aitken was unable to get away at the start, yellow flags flew immediately. His HWA car was retrieved from the grid just as the slow-starting Pourchaire led the field back around.

Despite a hesitant launch, Pourchaire kept his lead from Shwartzman and drew out a gap of one and a half seconds over the Prema car by the time they came back around to the grid.

Early contact saw both Lirim Zendeli and Jehan Daruvala heading into the pits for front wing replacements, both having been shown the black-and-orange ‘meatball’ flag during the early laps. Daruvala’s race further deteriorated when he received a five-second time penalty for speeding in the pit lane during his stop.

Shwartzman stayed within a second-and-a-half of Pourchaire but not make any more significant gains against the ART during their first stint.

Daruvala’s hideous weekend ended on lap 20, when contact with Gianluca Petecof at the Nouvelle chicane took his Carlin out of any further running. At the same time, Ticktum was able to catch up to Piastri, clearly intending to make the overtake before pit stops.

Ticktum was the first of the front pack to pit, trying to work heat into fresh soft tyres on lap 27 to take advantage of the pace against Piastri and Shwartzman. Piastri pitted in response, covering off Ticktum to emerge ahead of him in fifth place.

Shwartzman’s stop, three laps later, did not go as smoothly. A problem with the left-rear tyre stranded him in the pit lane for so long he emerged behind both Piastri and Ticktum. Pourchaire pitted from the lead the lap following, with a smooth stop that saw him emerge comfortably ahead, Guanyu Zhou inheriting the lead, having yet to stop.

At almost the same moment Pourchaire left the pits, Marcus Armstrong’s race ended following contact with Juri Vips. A Virtual Safety Car period covered the retrieval of Armstrong’s car. One VSC soon bred another as Lirim Zendeli, who had already been forced to change his front wing once, went into the wall at La Rascasse on the restart.

After the latest VCS period ended Ticktum took advantage of a lock-up by Piastri around the swimming pool, the two running alongside each other up to La Rascasse until Ticktum ran out of space and his race ended abruptly, trapped against the TecPro. “I’m really, really, really sorry” he told his team on the radio.

Meanwhile Zhou continued to lead the race with a 19-second gap over Pourchaire, but still needing to take his mandatory stop. By lap 37 of 42, Pourchaire had cut the gap to under 13 seconds, when Zhou finally pitted and Pourchaire reassumed the lead.

Felipé Drugovich emerged the victor from a three-way battle between himself, Zhou and Liam Lawson for fourth and then third, with Piastri staying in second and Pourchaire able to confidently take the chequered flag.

Pourchaire became the youngest ever Formula 2 winner, at just seventeen years old, breaking the record set by Lando Norris in 2018. Piastri and Drugovich completed the podium.

Shwartzman had to settle for fourth ahead of Guanyu Zhou, who retains the championship lead. Ralph Boschung was chased across the line by Liam Lawson. Juri Vips, Roy Nissany and Richard Verschoor completed the points-scorers.

Following the long wait until the Monaco round, the F2 field will be in action again at the Azerbaijan Grand Prix in two weeks’ time.