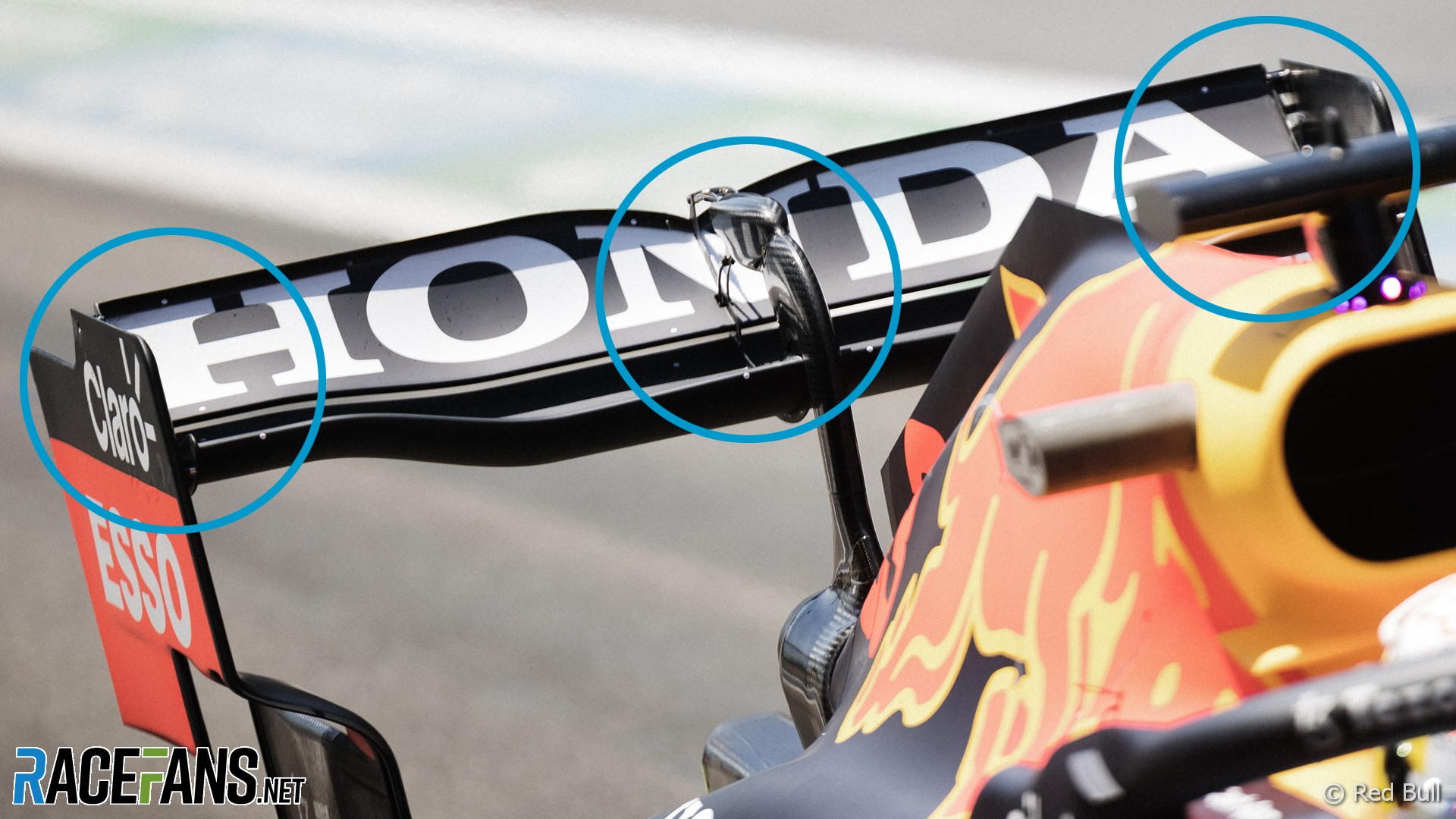 The FIA has introduced a new system for monitoring rear wing deflection this weekend using dot-shaped stickers positioned on the cars’ bodywork.

The rear wings of several teams have come under scrutiny after they were seen flexing significantly during the Spanish Grand Prix weekend.

The FIA is using onboard video footage to observe any movement of the stickers to judge how far rear wings deflect at speed around the Baku City Circuit this weekend. The dot-shaped stickers measure 10mm across and there are six of each on the main plane and flap of the rear wings.

Teams were advised of the change in a revised technical directive issued last week. McLaren team principal Andreas Seidl welcomed the move and called on the FIA to use any evidence of wing flexing to punish teams who are breaking the rules.

“Our position hasn’t changed compared to what I communicated during the Monaco race weekend,” Seidl told media including RaceFans in Baku today. “We simply need to see now in the course of the weekend what will happen.

“It was good to see that there was an update on the directive to the teams last week, that these stickers have been introduced already for this weekend, which gives the FIA a better opportunity or possibility to measure what’s actually going on.”

The FIA previously announced new static tests on rear wings will be introduced following this weekend’s race. However McLaren and other teams have complained this will allow any rivals whose rear wings flex to continue using designs which do not conform to the regulations in Azerbaijan this weekend.

The FIA’s head of single seaters, Nikolas Tombazis, has since indicated teams could be found in breach of the rules on the basis of evidence gathered from the new stickers. Article 3.8 of the technical regulations states that, with certain exceptions, “any specific part of the car influencing its aerodynamic performance must remain immobile in relation to the sprung part of the car.”

“To my understanding these dots simply help to measure accurately what’s happening, because when we look at the videos from Barcelona, also for the FIA, it’s obviously difficult to get in detail the numbers in terms of what is flexing and how exactly. So in the end, it’s just giving the FIA the chance to measure in detail what’s ongoing and which parts.

“I think Nikolas made it clear also in his TD that if he sees extreme cases like on my point of view we have seen in Barcelona, he will take action.”

“From our point of view, if we see deflections again, like we’ve seen in Barcelona, there needs to be action here this weekend,” Seidl added. “How this action will look like in the paddock I don’t know yet.”

Seidl denied a ‘grey area’ exists in the rules between article 3.8, which forbids flexible wings, and 3.9, which defines the load test. “I don’t think it’s grey, from our point of view,” he said. “You simply need to go into the detail of the design of these parts.

“If you detect – again that’s not our job, it’s FIA’s job to do – if you then detect that there is certain designs around which are made on purpose to flex in a certain way, I think it’s pretty clear what’s happening.”

“[Article] 3.8 pretty much defines clearly what is allowed and what is not allowed,” he added. “And then if someone designs a rear wing or endplate with the clear intention to flex in a certain way, even in a way that doesn’t get detected by the test in 3.9, I think it’s pretty clear what that means.

However he said it was too early in the weekend to consider a protest, as teams may not run their race-specification rear wings until tomorrow. “In general it doesn’t make sense to do anything before the event because you can change rear wing on Saturday morning. There’s no point to do anything on a Friday night.”