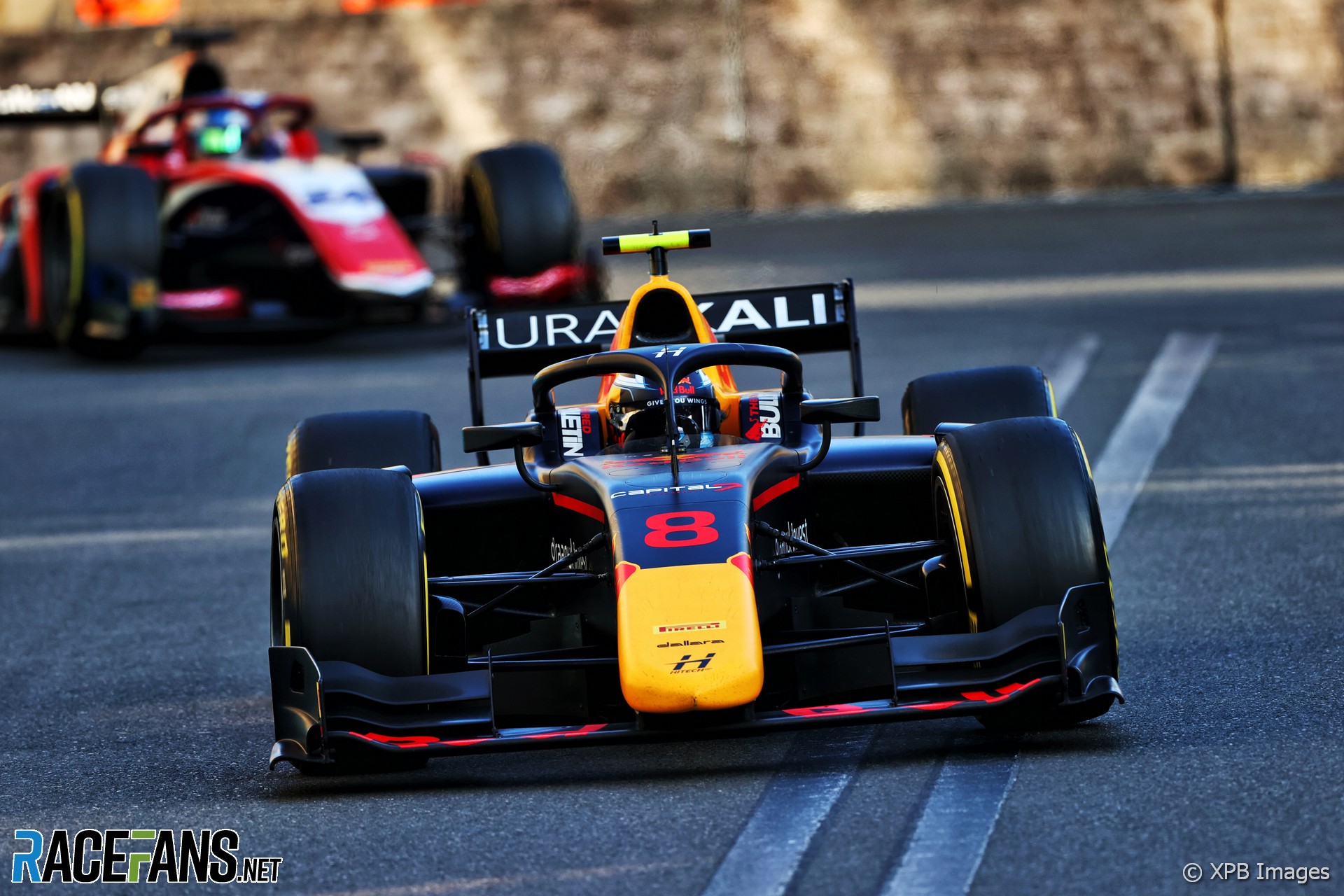 Jüri Vips has taken his first Formula 2 win, moving from third on the grid to take the chequered flag after multiple Safety Car periods.

Bent Viscaal, who finished tenth in this morning’s sprint race, started from pole position on the partially reversed grid. David Beckmann lined up alongside but Viscaal narrowly got away in the lead.

Chaos broke out behind them as several drivers braked late for the first corner, sending clouds of tyre smoke into the air. Guanyu Zhou and Dan Ticktum collided, Zhou locking up and sending them both into the run-off.

“So fucking annoying,” Ticktum fumed, “it’s like ‘why me’ but it’s happened to other people today so it is what it is.” He was at least able to continue, albeit right at the back of the field.

Théo Pourchaire and Ralph Boschung also tangled on the exit of the corner. Pourchaire was able to continue but forcing drivers behind into evasive manoeuvres.

Before the Safety Car was deployed while cars were retrieved, Beckmann made a move for the lead around the outside of Viscaal at turn five. The race was then neutralised for two laps.

Pourchaire was forced to come into the pits to replace his front wing after the Safety Car restart, he and ART not having noticed the damage before returning to race pace. He assumed Ticktum’s previous place at the rear, on exiting the pit lane, while Ticktum himself immediately overtook Alessio Deledda and Marino Sato to move up to 16th, before doing the same to Samaia and Aitken down the long straight to take 14th, making up four places in a single lap.

Juri Vips was also able to pass Viscaal, to take second place and begin to hunt down Beckmann for the lead.

On lap six Richard Verschoor was pushed into the wall by Roy Nissany, spinning into the TecPro at turn three. This was the same location where two F1 cars crashed during qualifying earlier on, and the banners looked quite haggard from repeated impacts by the time Verschoor landed in them.

“He brake-tested me, he braked very, very early” said Nissany on the radio in protest.

No sooner had the race restarted, with cars on cold tyres, than Marcus Armstrong and Christian Lundgaard ended up in the barriers at turn one, both of them joining the ranks of attrition from a race that entered another hiatus, this time a Virtual Safety Car. Formula 2 drivers are not allowed to pit during VSC periods, meaning no driver could take advantage of trying to get fresher tyres for the remaining 11 laps.

The racing restarted on lap 10 and Beckmann was able to hold the lead from Vips for only less than half the main straight, when Vips nearly took the lead. The Red Bull junior was able to pull out a gap of more than a second over the subsequent three laps, leaving Beckmann to fight with third-placed Jehan Daruvala.

Vips held the lead to the end, with Beckmann and Daruvala completing the podium. The other points-scoring drivers were Viscaal, Robert Shwartzman, Ticktum, Liam Lawson and Oscar Piastri.

Guanyu Zhou keeps the lead of the championship but Ticktum’s sixth-place finish puts him just one point behind second-place Pourchaire.