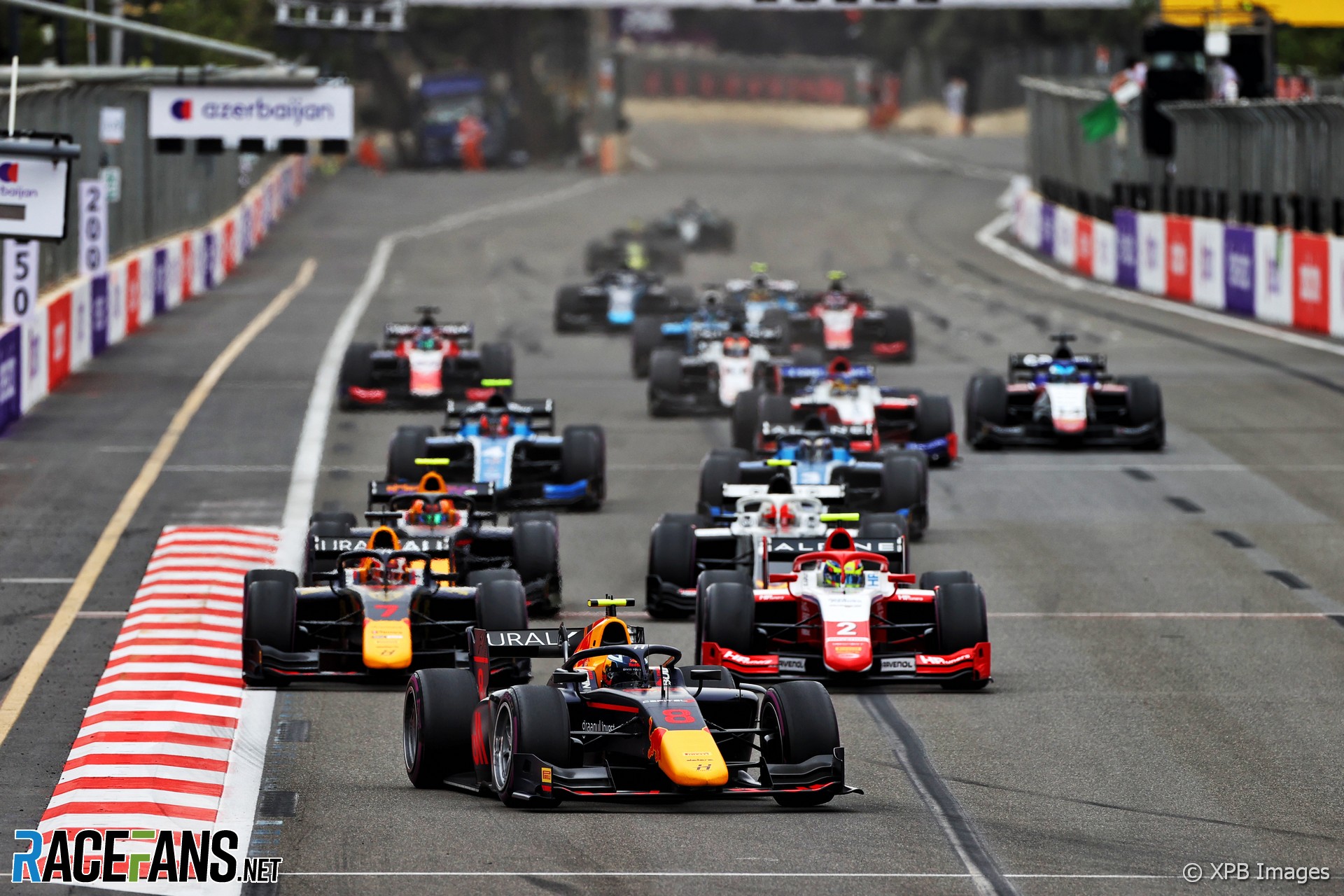 Conditions at the start were very slightly damp following overnight rain, with the track much cooler than the start of yesterday’s second sprint race. “The whole field’s on the option [tyres] apart from one guy, I would imaging because of the high likelihood of a Safety Car in the first few laps” observed Dan Ticktum on the formation lap.

The first start was aborted because of that very guy – Jack Aitken who was starting the race on medium tyres – stalling on the grid. He and Campos’ Matteo Nannini were both wheeled back into the pits to be started from there.

Off the line, Lawson was passed by Vips and defended firmly from Pourchaire at the exit of turn one. Vips motored off into a lead which never looked under serious threat while all behind him got entangled in each other.

Further around lap one Marcus Armstrong, whose season has been so appallingly luckless for the second year running it almost defies belief, went into the frequently-visited TecPro at turn three. He had been running three-wide with Ticktum and Pourchaire, and Ticktum on the inside line was the only one of the trio to emerge unscathed.

The Safety Car appeared briefly but returned to the pits on lap two. Vips held the lead on the restart, Piastri briefly getting a run on Lawson to take second but passed back swiftly without much argument.

Lawson was then handed a 10-second time penalty for pushing Pourchaire wide at the start, the two having crossed the pit exit as they battled off the line. That effectively ending the pole-sitter’s hopes of a win or podium. Meanwhile Ticktum was found at fault for the incident with Pourchaire and Armstrong, and was also given a time penalty to serve at his pit stop.

Vips pitted from the lead on lap six and it looked as though Piastri might have managed to get a pit jump on him. However Vips was able to re-pass him easily with DRS, while Piastri himself was under investigation for a pit lane incident.

Piastri’s bid to challenge Vips was essentially neutralised by being issued a five-second time penalty for his unsafe release into the path of Felipe Drugovich. The two leaders were able to pull away enough that Piastri retained his second-place position, despite the penalty but had no realistic chance of drawing the gap out on Vips, even if he had been able to overtake the Hitech driver.

Lawson, David Beckmann and Guanyu Zhou three wide into turn one, Zhou was forced wide but ultimately came out alongside them after Lawson and Beckmann fought cleanly down the straight to turn three, all three carrying on in formation until the narrowing track at turns five and six finally forced them into order.

Robert Shwartzman, who had started the race 10th, was able to make up places across both stints, ultimately finishing third. The drivers ahead of him for much of the race – Ticktum and Aitken, on an alternate strategy and penalised respectively – were holding space but not really in the same race.

Guanyu Zhou keeps the lead of the drivers’ championship, despite not scoring in the second sprint or feature race in Baku, on 78 points. Oscar Piastri has moved to a much closer second than before, just five points behind Zhou. Shwartzman has taken third in the standings, on 66 points.