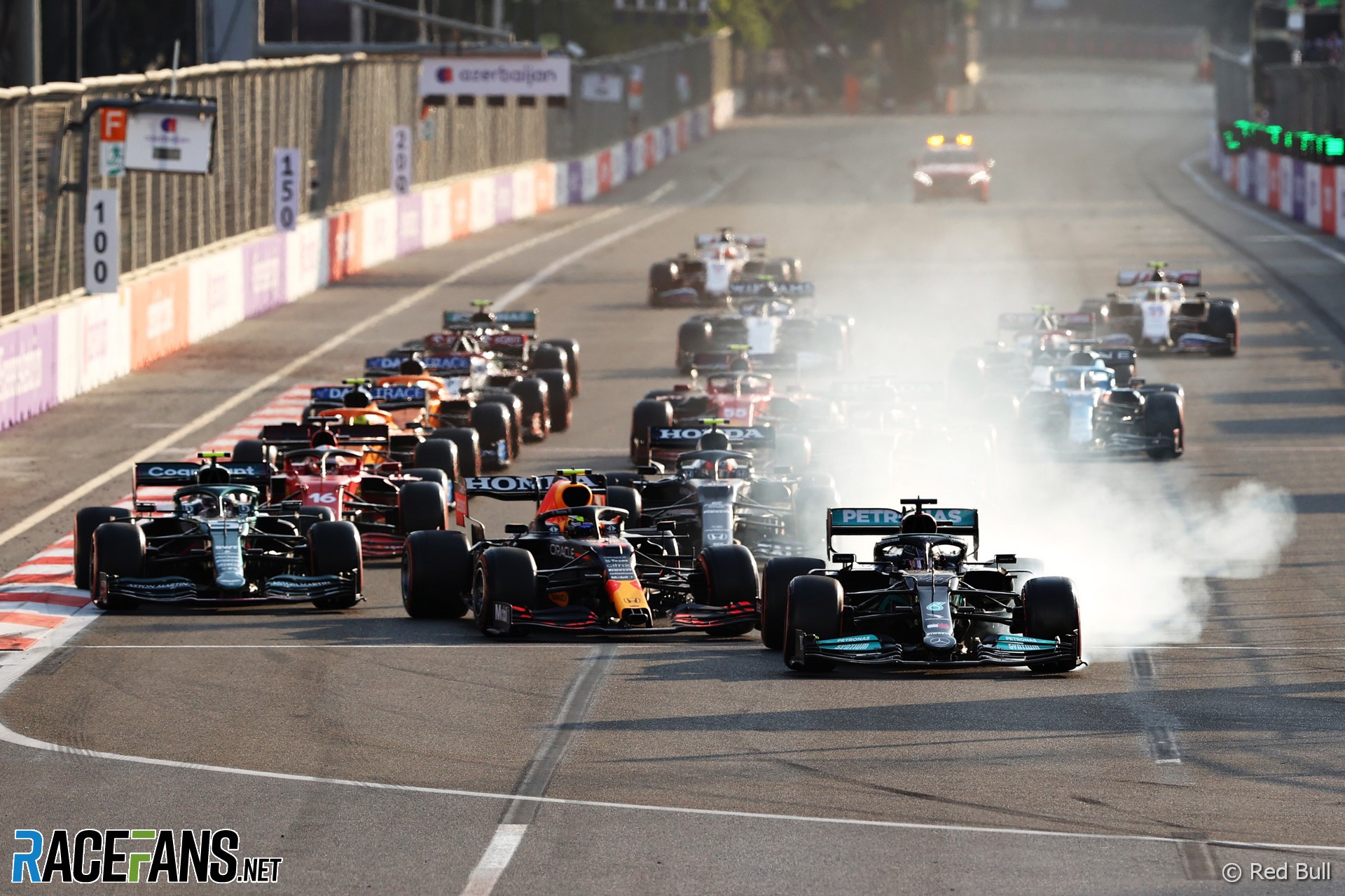 The strange spectacle of Formula 1 cars lining up for a standing start ahead of a two-lap race in Azerbaijan prompted much discussion.

As the cars sat in the pit lane during the red flag period caused by Max Verstappen’s crash, just three laps of the race remained. For any restart, a further tour of the circuit would be needed to get them back to the start-finish area, so just two laps of racing were available.

When the top three finishers were asked what they thought of performing a standing restart for just two laps of racing, third-place Pierre Gasly jokingly quipped: “The Americans took over so I wasn’t really surprised that we go first with the entertainment.

“No, I was quite happy,” he continued. “It always brings a bit more excitement. It creates some sort of adrenalin inside you. I knew there would be some opportunities because you start only for two laps, everybody is a bit like lions out of the cage and everybody goes for everything and tries to make up as many positions as they can in a very short time.”

F1’s rules mean a restart was always likely to happen. The days of races being abandoned if they were red-flagged after 75% distance, or using ‘aggregate times’ of two separate races to decide the final result, are long behind us. The latter hasn’t happened since the rain-hit 1994 Japanese Grand Prix.

Although this area of the rulebook was rewritten long ago, the expectation races may not be allowed to go the distance in some circumstances has lingered, even though it now seldom happens. These days it takes exceptional circumstances – such as Jules Bianchi’s terrible crash at Suzuka in 2014, or the monumental downpour at Sepang in 2009 – for a race to be abandoned.

Whether the tyre failures Verstappen and Lance Stroll had suffered were grounds to consider not restarting the race is a matter Pirelli’s investigation should address. As far as the rules were concerned, as Formula 1 race director Michael Masi pointed out, there were no grounds not to resume Sunday’s race.

If the decision to restart the race caught some viewers by surprise, the same did not apply for the teams. Even Red Bull, who had the most to gain from not restarting the race, saw the decision coming. The team’s sporting director Jonathan Wheatley was heard making the case to Masi during the race broadcast: “Consider a red flag and the opportunity to change tyres,” he said.

But the decision to red flag a race and then restart it so close to the end created a significant precedent for future occasions where the Safety Car is running with a handful of laps remaining. In such a situation, teams now have reason to expect race control will consider red-flagging the race in order to conclude it ‘under green’.

Masi admitted Sunday’s race was red-flagged for this very reason. “We weren’t confident that the recovery on the pit straight and the amount of debris that was everywhere could be cleaned up in the appropriate time,” he said. “So I thought it was in the best interests of the sport to suspend and then restart in that circumstance.”

In any future races where the Safety Car is deployed near the end, virtually every team which isn’t leading the race will be lobbying Masi to throw a red flag, as Jacques Villeneuve explained in an interview for RaceFans this week.

“Ultimately, with the restart at the end, there’s an issue with that red flag because it’s random,” he said. “So if you want to give a red flag at the end of the race then it should be in the rules that if it’s under caution with three laps to go, there will be a red flag. So it’s not ‘one race yes’, ‘one race no’.

“Because then teams will complain that, ‘oh, you helped that team that one time, but not us the other time’. So I think there has to be a fixed rule. It’s either there is no red flag or there is one with three laps to go.

“That way it’s always the same and there’s no bickering afterwards.”

Appropriately enough, one American series gives a good illustration of why this rules change may be worth considering. In IndyCar, last year’s Indianapolis 500 ended ‘under caution’, to the dismay of several drivers who expected it to be restarted, as previous editions had been in similar circumstances.

As red flag restarts have become more commonplace in Formula 1, this scope for inconsistency could easily be a flashpoint for controversy if it is not addressed.