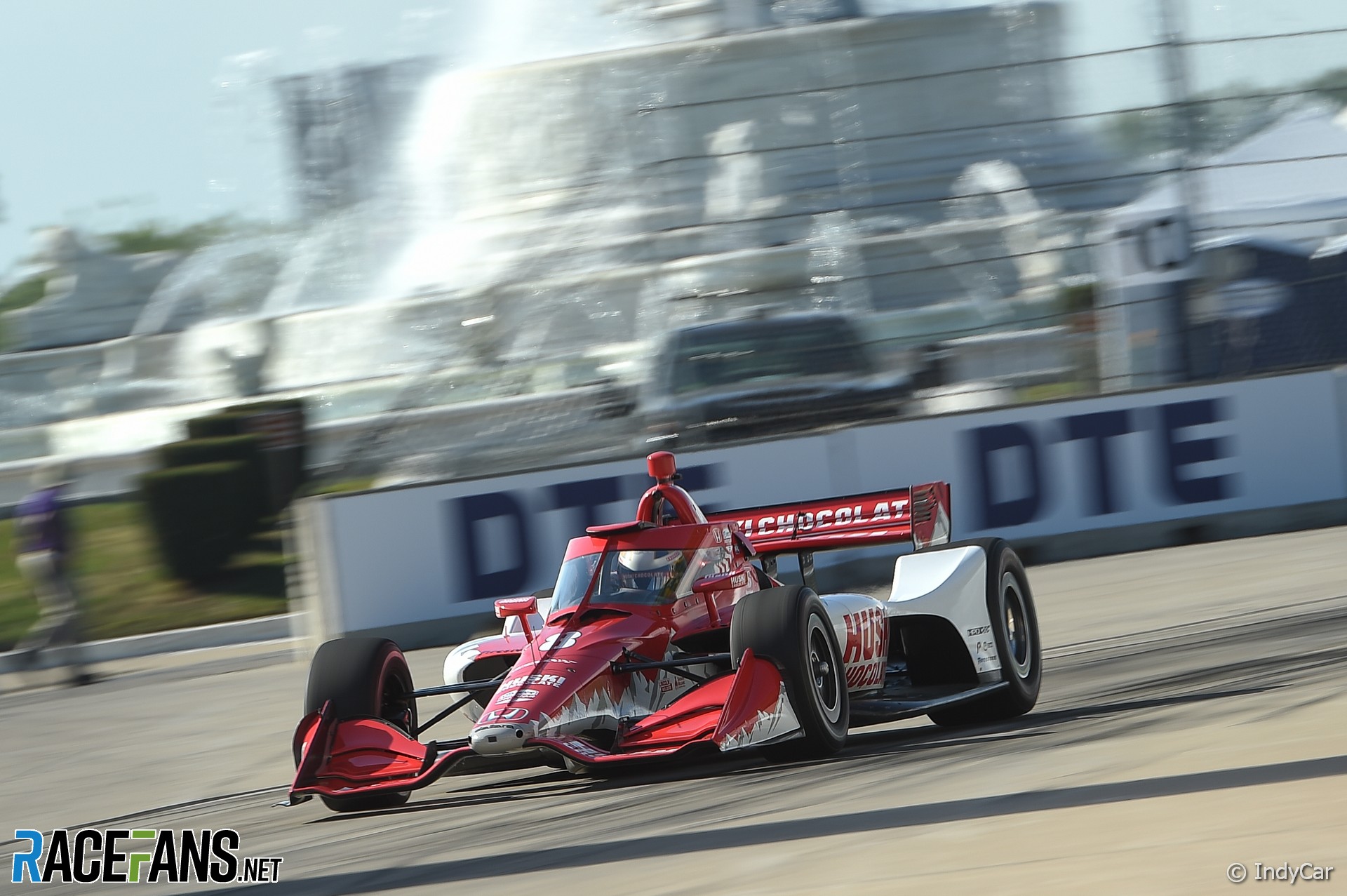 Marcus Ericsson’s first career IndyCar victory during Saturday’s opening race at Detroit as a breakthrough eight years in the making.

The Ganassi driver shared how difficult it had been to go so long between single-seater victories after the race.

“I think it would be tough for anyone to go eight years without winning a race when that’s what you do,” said Ericsson. “My job is to win a race, and I haven’t done it for eight years. Of course, it’s going to take a toll.

“I was winning races pretty much every year, going up the ranks,” said Ericsson. “It was something that you were sort of used to and targeting.”

It’s a story that’s been told several times: Take a Formula 1 driver who has struggled to achieve form, place them in a new environment such as IndyCar, and often they will thrive once again. But even for a Formula 1 veteran driving for one of IndyCar’s top organisations, Ericsson’s maiden victory still felt like a shock to the system.

Yes, fortunate circumstances helped put Ericsson at the front of the field. Will Power dominated the back half of Saturday’s race and was poised to take victory only for an ECU failure during the second red flag to rip it away from Power with just six laps remaining.

That second red flag was prompted by a single-car accident from the latest ex-Formula 1 driver to turn up in IndyCar, Romain Grosjean, a more prominent name with a stronger track record in F1.

It was somehow fitting, as Grosjean had played a role in one of few moments from Ericsson’s F1 career which earned widespread attention, which he wasn’t even involved in. That being Grosjean’s bizarre crash during a Safety Car period ta the 2018 Azerbaijan Grand Prix, when his race engineer Gary Gannon incorrectly told him “I think Ericsson hit us” on the radio. Ericsson surely deserved to be remembered for more than that instant meme.

But he never had the equipment to challenge for victories, or even the top five, across that period from 2014 to 2018. He arrived with Caterham as they were heading towards collapse. The Sauber team he spent the remaining four seasons with was also fighting for its survival, up until Alfa Romeo became their title sponsor in the last season.

In between were years often spent being upstaged on track by his team mates. Ericsson never finished better than eighth in 97 races, only cracked the top ten 11 times. He peaked at 15th in RaceFans’ annual driver rankings.

“When you reach the top level like I did in 2014 to F1, I was in smaller teams that didn’t have the resources to compete for wins,” he said on Saturday. “Then you as a driver sort of forget that feeling to fight and go for wins.”

Ericsson’s championship titles in Formula BMW and in All-Japan Formula Three, under the mentorship of former Indianapolis 500 champion Kenny Bräck as a teenager, felt like a distant memory by the time he reached the fourth season of his GP2 career. Until Saturday, his last competitive victory was at the 2013 GP2 feature race at the Nürburgring.

That was the only highlight of a campaign which began with him as title favourite after transferring to DAMS, who had taken back-to-back titles with Grosjean and Davide Valsecchi. Ericsson finished outside of the points in the first nine races.

Compare Ericsson’s arc to that McLaren protegé Kevin Magnussen, hailed as a future champion when he won the 2013 Formula Renault 3.5 Series championship and moved up to F1 the following season – Ericsson was never able to shake the perception of being the underperforming GP2 driver who got into and stayed in F1 purely because of eight figures’ worth of financial backing from Swedish sponsors.

But just like Ericsson, Magnussen has gone eight years between wins. They ended their droughts on the same day, Magnussen victorious in the IMSA race which followed the IndyCar round on Saturday. He ended a winless drought that ran through an F1 career where his amazing potential was never fully realised.

Through Ericsson’s time in F1, some wondered aloud whether his substantial financial backing would have been better invested in another Swedish driver, European Formula Three champion Felix Rosenqvist.

When both broke into IndyCar in 2019, appeared to have been settled definitively. Rosenqvist, who arrived with Ganassi, finished sixth in the championship standings and took home ‘Rookie of the Year’ honours. Ericsson, who began his IndyCar career at McLaren SP’s forerunner Schmidt Peterson Motorsports, had just one podium (also at Detroit) and finished a lowly 17th in the standings.

The debate tipped further in Rosenqvist’s favour when they became team mates at Ganassi last year, Rosenqvist scoring his first win at Road America in July, while Ericsson recorded 12 top-10 finishes without a single podium.

The pair drivers have a great deal of respect and admiration for one another. That much was evident when Ericsson sent his regards to Rosenqvist after the race on Saturday, following Rosenqvist’s terrifying crash earlier in the race. Rosenqvist, in turn, congratulated Ericsson on his long-awaited first victory from the hospital after the news that he had suffered no life or limb threatening injuries.

Even before his breakthrough victory, though, Ericsson felt a positive shift in his mentality from the moment he came to IndyCar. He knew that he had the chance to compete for victories for the first time in a long, long time.

“It was not until I went to IndyCar that I realised how much I missed that feeling to go into a weekend and have the mindset to try to win, try to beat everyone,” Ericsson said.

“You need to be mentally strong and believe in yourself, believe in your abilities,” he said. “I’ve done that. I’ve bounced back strong. I think that’s one of my strengths, that I’ve been having good mental strength. But, for sure, it’s tough.

“I think I showed that I can do it. I think it’s going to help going forward,” Ericsson added.

4 comments on “After breakthrough win, Ericsson describes how his eight-year win-less spell took its toll”