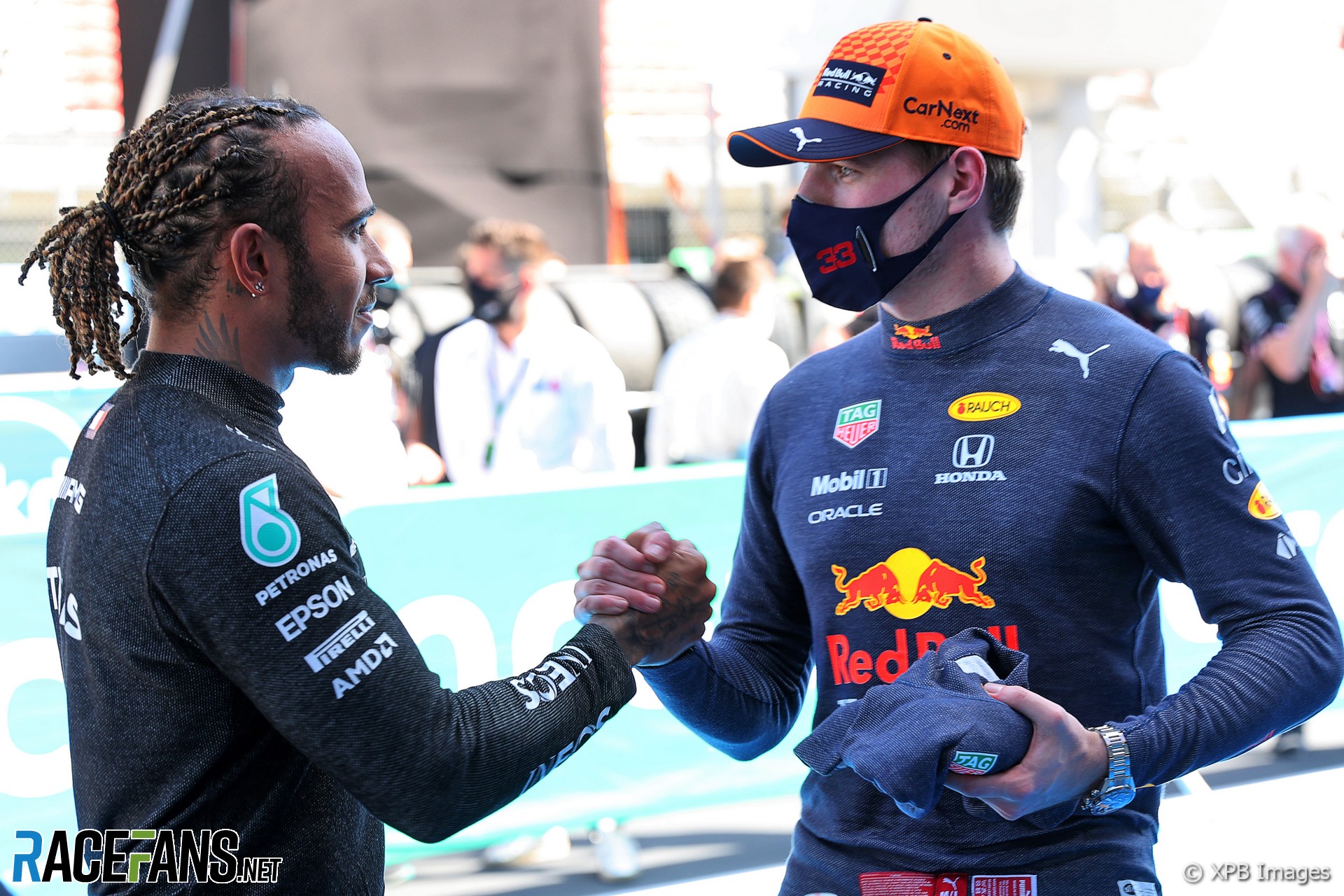 Lewis Hamilton arrived in Baku four points behind Max Verstappen. But having underwhelmed in practice, a fine qualifying effort and early pass on Charles Leclerc put the Mercedes driver on course to retake the lead.

Then a slow pit stop for the Mercedes driver handed the initiative to Red Bull. Verstappen took the lead, and with Sergio Perez backing him up in second place, was on course to extend his points advantage.

Next came the gut-wrenching tyre failure which put Verstappen out of the race, denying him a potential 26 point gain. Making matters worse for Red Bull, Hamilton was now on course for second place – 18 points – or even more.

What a relief it must have been for Red Bull, then, when Hamilton slithered wide at the restart, condemning him to finish outside the top 10, and ensuring the point situation remained unchanged.

That one race provided more championship twists and turns than we’ve seen over an entire campaign in recent years. Will we finally see our first season-ending showdown for five years at Yas Marina in December – or are we destined for an anti-climactic end to the championship?

Red Bull started the season with a quick car, yet Mercedes contrived to grab victory in the season-opener in Bahrain. Hamilton enjoyed a slice of luck at Imola where he bagged second place despite an error, and wins in the next two races kept him ahead.

Mercedes weren’t as competitive in the last two races on tracks which didn’t suit their W12. But Verstappen’s misfortune last time out means Red Bull didn’t reap the rewards as fully as they might have hoped.

Now the championship moves on to more typical European road circuits. Based on Mercedes’ performance at similar tracks, especially the Circuit de Catalunya, Hamilton should have a good chance to regain the points lead in the coming weeks.

Are we about to see the world champions flex their muscles and draw clear of their rivals? This has happened before, notably when Sebastian Vettel and Ferrari took the fight to them in 2017 and, most recently, 2018 (below).

But this year things are different for two key reasons. All teams are constrained by a budget cap, and Mercedes are feeling it especially keenly. Valtteri Bottas’ crash at Imola inflated their repair bill and last month the team called off a 2022 tyre test to avoid further expenditure.

They also have next year’s radically new technical regulations to work on. Mercedes CEO Toto Wolff is adamant they won’t sacrifice potential gains for next year in order to shore up their 2021 title bid. “We already readjusted the plan to 2022, and there is no way of backing out of it,” he said. “We will not change any decisions that we have taken, strategic decisions, just because we had two really bad race weekends.”

It is less likely this year’s championship will be decided at the final race due to changes in the calendar and points system.

Three years ago there was a maximum of 500 points available before the final round. That has increased to 581 this year.

This inflation in the points system reduces the likelihood we’ll see a final-round title-decider. The number of points needed to clinch the title before the final race has increased by 3.8% (from 26 to 27), while the number of points available has risen by 16.2%.

This is due partly to changes in the points system. A bonus point for fastest lap was introduced in 2019 and from this year ‘Sprint Qualifying’ events will award up to three extra points at three races.

It has also come about due an increase in the number of races. However the calendar presents another vital variable for this year’s championship.

As the world continues to emerge from the pandemic, the cancellation of the Singapore Grand Prix earlier this month was a reminder the final rounds of the championship aren’t set in stone. F1 still intends to replace that lost race with another to ensure the planned 23 rounds go ahead.

Despite the record number of races on this year’s calendar, F1 is content to visit the same venue twice in order to ensure the show goes on as intended. It will hold the first of two back-to-back races at the Red Bull Ring later this month, and the Circuit of the Americas is under consideration for a double-header to make up for the lost Singapore race.

While there is undoubtedly a financial consideration involved, there is also a valid sporting reason for ensuring the season isn’t shortened by a late cancellation. In the latter stages of the season, when points-scoring opportunities are reduced, the sudden loss of a race could even decide the championship.

This has happened in other series before, notably in the World Touring Car Championship five years ago. Jose Maria Lopez had a healthy championship lead with six races remaining, and when the series cancelled its two races in Thailand without arranging a replacement, Lopez automatically became champion.

Doubts persist over some of F1’s later calendar dates this year including Brazil and Australia’s rounds of the world championship in November. These lie between Mexico’s round and Saudi Arabia’s first grand prix in Jeddah. With two races at the beginning of December already, delaying the end of the season is unlikely to be an option.

F1’s contingency planning for cancellations since the pandemic began has been encouragingly diligent. The possibility that the championship could be decided by a race being called off therefore appears remote.

As has long been the case in F1, the championship outcome is more likely to be swung by whichever team makes the greatest strides in development over the season. In recent years that has been Mercedes. But perhaps Red Bull, desperate to end their eight-year title drought and facing the inevitable uncertainty which comes with Honda’s departure at the end of the season, will prove willing to put a vital extra push into their 2021 campaign.

“Max could have come out of the weekend putting 10 points onto his championship lead, or 11 with the lap if it’d had finished where it was with five to go,” Red Bull team principal Christian Horner reflected after the Azerbaijan Grand Prix.

“So he could have been 15 up. He’s still four up but at one point he was looking like he could be 21 down if Lewis had nicked the victory. So it’s swings and roundabouts. I think it’s going to do this, while the cars performance is so close, throughout this championship, which makes it so exciting to be part of.”

25 comments on “Will Hamilton versus Verstappen go down to the wire – and what could stop it?”