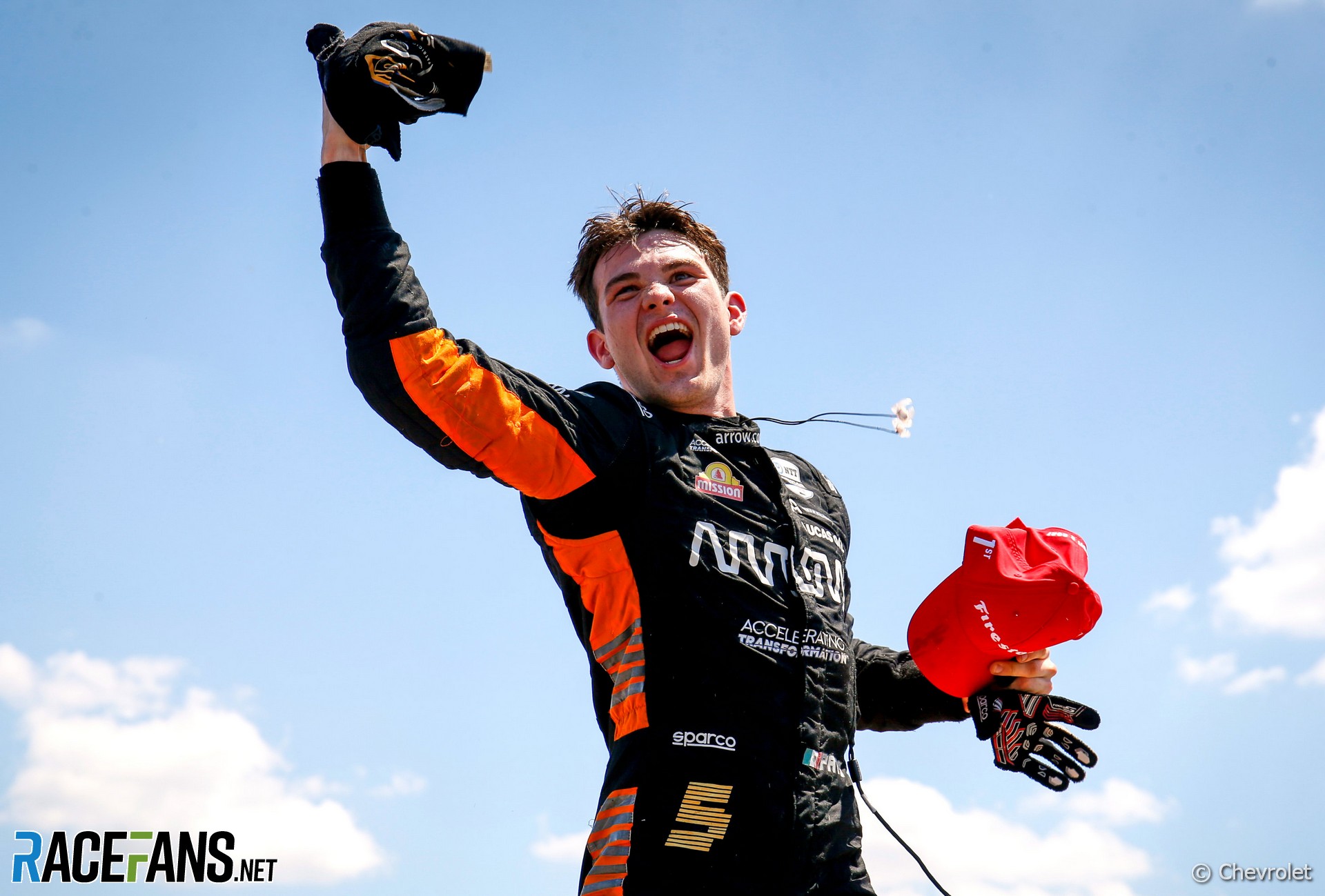 Patricio O’Ward left this weekend’s IndyCar Detroit Grand Prix with his second career victory in a span of five races, and a one-point lead in the drivers’ championship. At age 21, O’Ward is one of the foremost faces of IndyCar’s ‘youth movement’ – a fast, daring driver with a charming, energetic personality.

The last time IndyCar raced on the streets of Belle Isle, O’Ward’s racing future – let alone his place in IndyCar – was far from certain. Indeed, throughout most of his young career, the road ahead of the young man they call “Pato” was never clearly laid out.

“My career has almost ended at least four or five times,” O’Ward reflected after his win in Sunday’s second race of the Detroit GP double-header. “It’s such a tough business to make it. When you do it, you have to continue proving yourself for the next 20 years if you want to have a long career.”

After a strong rookie year in the 2015 Pro Mazda Championship (the Road to Indy’s second tier series, now known as Indy Pro 2000), O’Ward dominated the first half of 2016 with six wins in the first seven races, including a then-unprecedented sweep of the three races at Indianapolis – two on the road course, one at the nearby Indianapolis Raceway Park oval.

He did this while running on a race-to-race deal due to a lack of sponsorship. It was a miracle that he even found a ride for the first two rounds of the season, let alone that his early success eventually secured a full season ride.

Unfortunately for O’Ward, he hit a dry spell just as team mate Aaron Telitz surged into form in the second half of the season. Telitz went on to win the championship and, more importantly, secured the $600,000 USD scholarship which guaranteed a full-time drive in the Indy Lights series for 2017. Without that backing, two rounds in Indy Lights was all that O’Ward could afford to run.

Thankfully, O’Ward wasn’t entirely out of racing. Between 2016 and 2017, he landed a ride in IMSA Sports Car championship’s pro-am Prototype Challenge class. Before his 18th birthday, he was a class winner at the Daytona 24 Hours and Sebring 12 Hours. His superb driving powered his Performance Tech Motorsports team to the class championship, capturing seven wins in seven races to open the season – and only missing out on an undefeated season with a third-place finish in the last race.

At long last, O’Ward found the backing from his home country that he needed to secure a return to Indy Lights in 2018, full-time, and with perennial powerhouse Andretti Autosport. Battling his team mate Colton Herta from start to finish, O’Ward took nine wins in 17 races, and ended the season as the Indy Lights champion, his first single-seater championship.

When upstart IndyCar squad Harding Racing called O’Ward up to drive the 2018 IndyCar Series finale at Sonoma Raceway, and O’Ward dazzled on his debut by qualifying fifth and finishing ninth, it seemed as if young he had finally cleared the hardest obstacles ahead of him. Just days after his first race, Harding Racing – now in a partnership with George Steinbrenner IV – made the obvious decision to sign O’Ward to a full-season contract for 2019, with Herta as his team mate and technical support from Andretti.

Every strange, unexpected, and sometimes upsetting development which left Patricio O’Ward’s racing future twisting in the wind in 2019 alone would be enough to write a full-length novel about, so it’s best to keep the saga of Pato’s turbulent 2019 as brief as possible.

In February 2019, before the season began, O’Ward was released from Harding Steinbrenner Racing after his would-be employers couldn’t secure necessary sponsorship. In March, O’Ward and Carlin Racing agreed on a patchwork deal to run 13 out of 17 races including the Indianapolis 500. While Herta scored his maiden win at Circuit of the Americas, O’Ward finished eighth in his first race with the team.

Before the Grand Prix of Indianapolis came a surprise announcement – O’Ward had joined the Red Bull Junior Team with the prospect of pivoting towards a move to Formula 1. A devastating crash just 48 hours before Indianapolis 500 qualifying snowballed into O’Ward failing to qualify for the biggest race of the year, his car being too slow to make the field of 33.

By June, O’Ward was off to race in Formula 2 in Austria, driving for MP Motorsport in a one-off deal in place of the banned Mahaveer Raghunathan. By July, Red Bull plugged him into Dan Ticktum’s old ride at Team Mugen in the Japanese Super Formula Championship. This cut O’Ward’s 13-race IndyCar deal down to just eight races. Adding to the strangeness of the situation, he went from competing under a Mexican licence in IndyCar, to an American licence in F2, then back to a Mexican licence in Japan.

Red Bull and O’Ward mutually called the whole arrangement off in October. This was not a question of O’Ward was underperforming, but because most of the series O’Ward competed in didn’t have enough full-time competitors to validate most of the FIA superlicence points that Red Bull expected he had accumulated.

Just two weeks after being released from Red Bull, O’Ward joined McLaren SP for a full-time, fully-sponsored IndyCar drive at a team with a winning track record in its previous guise, Schmidt Peterson. At long last, O’Ward was going to get the chance to demonstrate his IndyCar potential with a competitive team, free from the distractions of wondering if his next race would be his last because the funding wasn’t available.

In 2020, O’Ward recorded three runner-up finishes, ten top-10 finishes in a Covid-shortened 14-race calendar, and finished fourth in the championship in his first full season. He beat former champions Will Power, Simon Pagenaud, and Ryan Hunter-Reay in the standings, and trailed his Indy Lights rival Herta by just five points. Having also taken his first pole position, all that was missing was a race win, but considering how close he came at Road America and Gateway International Speedway, it was only going to be a matter of time before that first win arrived in 2021.

It soon did, at Texas, and at Detroit he became the first driver this year to win twice. McLaren CEO Zak Brown confirmed he will uphold his promise to give O’Ward a Formula 1 test at the Yas Marina Circuit in Abu Dhabi, in December. The prospect he might vault from IndyCar to F1 one day may be remote – the FIA awards less superlicence points in total to IndyCar than F2 – but he is at least at a team where it is a possibility.

O’Ward’s ascent to the top of the IndyCar points standings will not surprise those who saw his potential on the Road to Indy, even when reaching the series was far from a sure thing. He’s vindicated the faith McLaren and Schmidt Peterson Motorsports showed by rebuilding their entire programme around him. He’s had his wings clipped several times, yet O’Ward finally has the summit of IndyCar in sight.