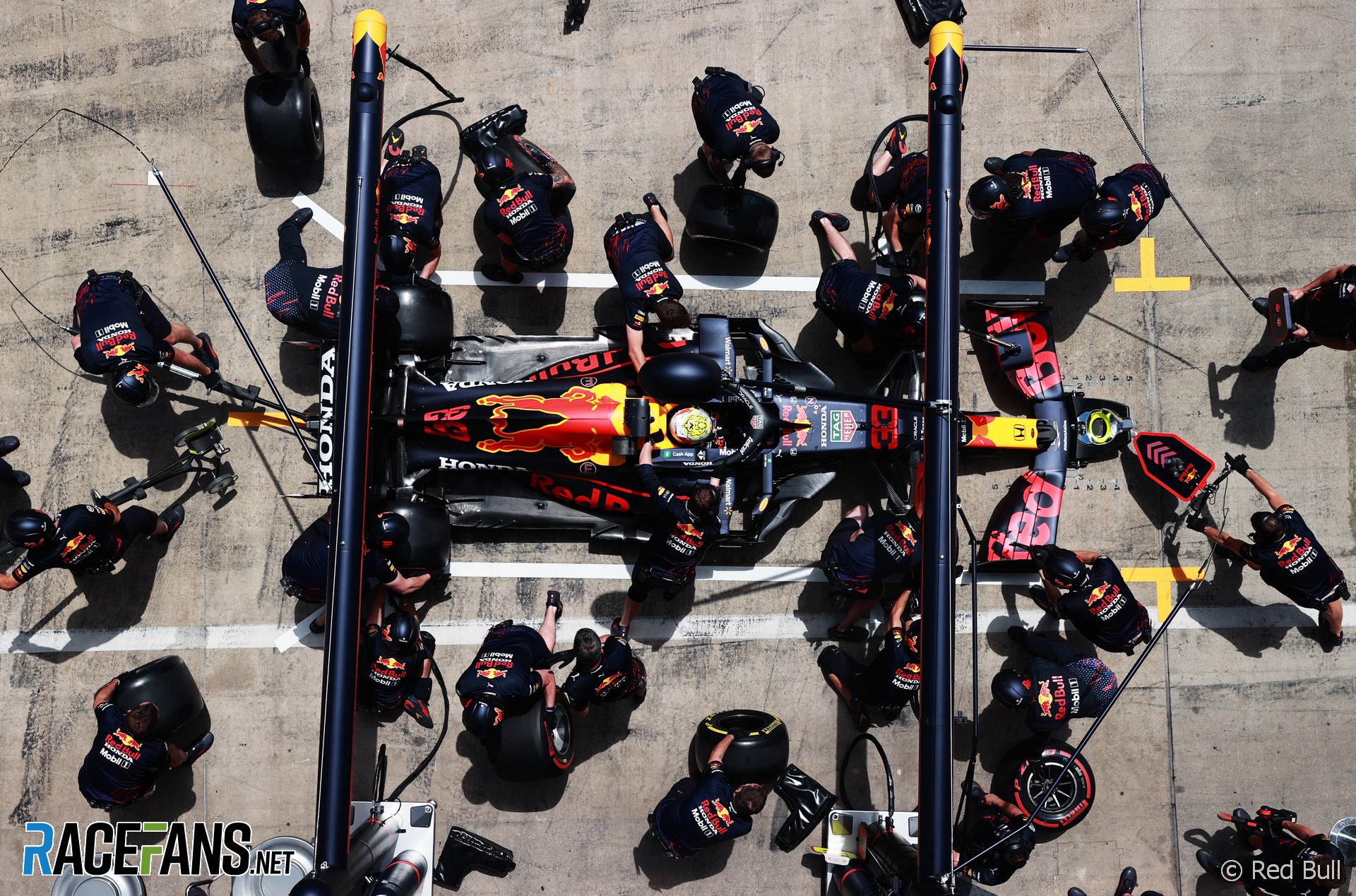 The last week has seen a flurry of technical directives hit Formula 1, most of them at a time when the sport was travelling between countries – thus making it difficult to keep pace. While the pit stop procedure technical directive was the most high profile due to its obvious implications for the championship battle, all will in some way affect F1, either immediately or in 2022. Indeed, clarifications of previous clarifications are not unheard of.

Apart from the recent run of TDs, during the past month the FIA halved the amount of rear wing flex permitted at speed and revised tyre operating procedures after a spate of high-speed failures in Baku. That all three TDs directly affect championship leader Red Bull may (or not) be coincidental, but others have been caught in the crossfire to some degree.

“Then we have some articles perhaps in contradiction with other ones – we saw it in Imola.” Kimi Raikkonen lost a points finish due to a penalty despite the stewards admitted there was a degree of “contradiction” in the relevant regulations.

“I think it is probably slightly over-regulated, yes,” said Alpine CEO Laurent Rossi at the same FIA press conference as Vasseur. “There’s been constantly ways of adapting your resources and the performance you extract from them [within] the regulations and of course the FIA has been responding with more and more regulation. That’s how the sport evolved and grew.”

F1 folk are generally reluctant to talk openly about regulation in the sport, and whether there is too much of it, not least because they do not wish to be seen to be questioning the governing body. Another factor is that the majority of rule clarifications revolve around safety, which is, of course, paramount. Criticise directives introduced for safety reasons, and you’re on shaky ground. Thus, folk are rather guarded with their public comments.

Speaking in Spielberg, a technical director told RaceFans that the number of TDs has risen each year, but offered the opinion that “It is no different than in real life, where the nanny state has taken over.” Another blames the teams themselves, saying they increasingly query activities or technologies of others, then highlight potential dangers to force through changes on safety grounds.

This trend has doubled, he believes, adding, “If the FIA does not react on that basis, then it potentially leaves itself open to later criticism should there be an incident.”

The pit stop TD provides a perfect example, he continued: “There have been no unsafe releases using the technologies deployed by a certain team (Red Bull), but there could be. The way the queries were worded, the FIA was forced to act.

“We investigated using a similar system, but it would have cost us a million dollars to develop, and we’d rather spend it elsewhere under the budget cap. Better to have it banned on ‘safety’ grounds…”

Another source stated that TDs are “No longer directives, but full regulation changes introduced under the auspices of clarification.” He cited the tyre pressure document, which runs to around a dozen pages, with the pit stop directive adding another five. In the recent past TDs ran to a page or two, at most, and were the exception rather than the rule.

Another example of teams questioning the actions of others was provided on Friday after Valtteri Bottas spun in the pit lane while experimenting with pulling away from a pit stop in second gear to minimise wheelspin. He came to rest pointing the wrong way opposite McLaren, who were quick to highlight the potential dangers to race director Michael Masi. The stewards handed the Mercedes driver a three-place penalty.

Was the penalty deserved? Arguably yes given that it would act as deterrent against somebody else experimenting with similar; was it unsafe? Given that personnel in the pit lane are required to be vigilant at all times against the unexpected, the incident, seen on global TV feeds, was probably hyped up excessively. Mercedes’ unimpressed team principal Toto Wolff accused rivals of describing “Armageddon scenarios” to Masi.

F1 has history in (ab)using safety for regulatory purposes: Until 2009 the governing body was empowered by the Concorde Agreement to amend all regulations on safety grounds – engines were downsized from 3.0-litre V10s to 2.4-litre V8s as the cars were too powerful and thus potentially unsafe; grooved tyres were introduced to reduce (unsafe) cornering speeds.

These provisions became a major battle ground between the teams and the FIA – one result was the formation of the Formula One Team’s Association, founded with the express objective of removing then-president Max Mosley from office. The FIA’s safety veto was subsequently amended, and can only be triggered for bona fide safety reasons.

There are no suggestions that the FIA has in any way overstepped the mark, but some observers believe a number of recent decisions to be borderline and possibly introduced on a knee-jerk basis, rather than being scientifically founded. Consider: no sooner had draconian new tyre operating procedures been introduced than Pirelli announced it had produced a revised rear tyre construction.

Mario Isola, the head of car racing for Pirelli – in the firing line over tyre pressures – believes that F1 risks confusing its fans. “We are working in an environment where we have the best engineers and the cars are very complicated, [the] rules are very complicated sometimes,” he said in France.

“The most difficult part is to explain to spectators what is going to happen. We have to find a compromise but it’s impossible to think that we go back to 50 years ago.”

F1 is never going back to the days of four-page rule books. But the latest flurry of technical directives suggests a compromise is some way off yet. Last week may well go down in F1 history as the point at which F1 went ‘nanny’. Nonetheless, before criticising the governing body for this state of affairs, the teams should first look at their own reactions.