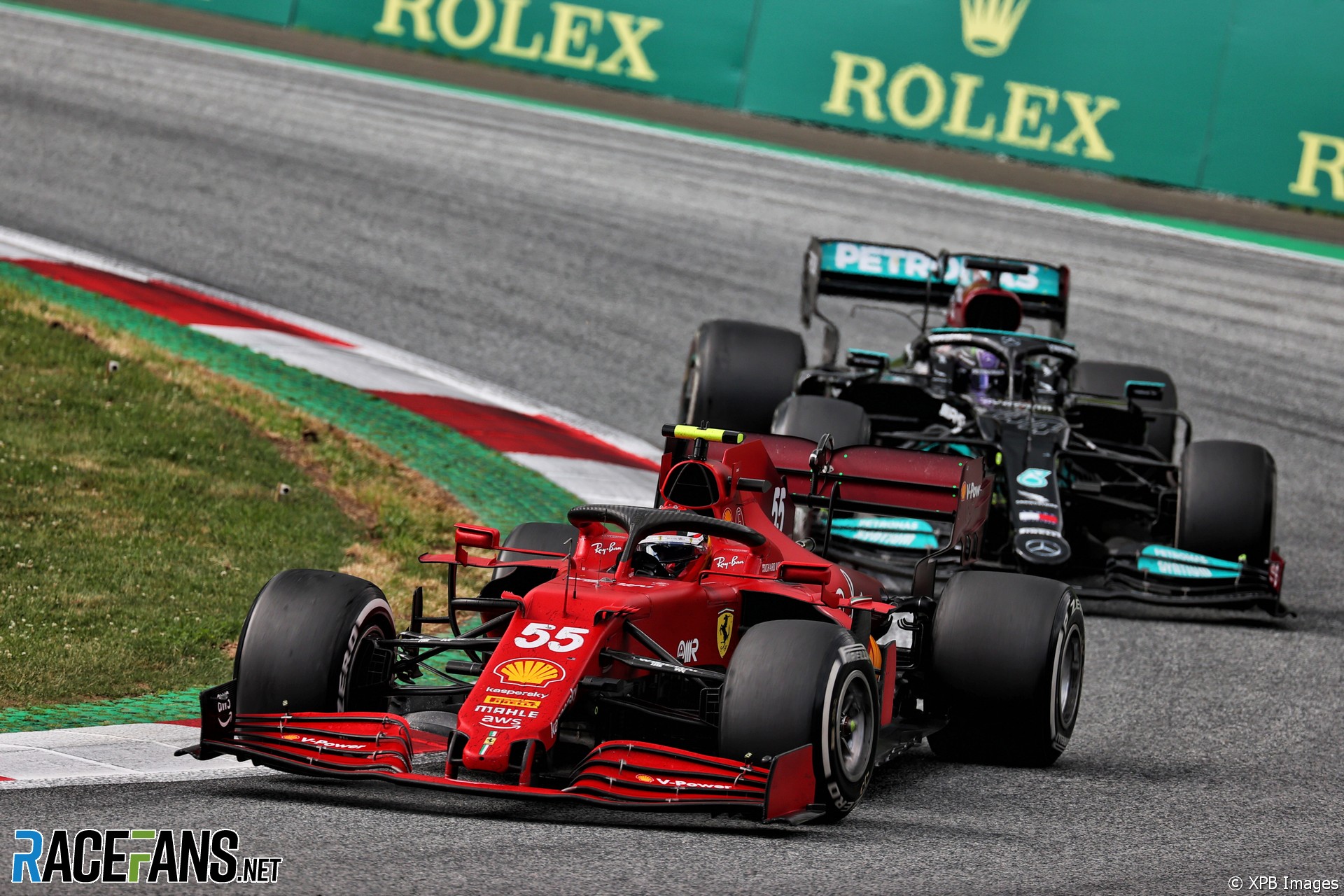 Carlos Sainz Jnr says that as Ferrari still don’t fully understand their issues at the French Grand Prix, their relatively good pace on the same tyres around Spielberg can only be put down to the circuit’s characteristics and not a change the team have made, yet.

“It is unfortunately, at the moment, track specific. The car is very similar to [at] Paul Ricard, and we haven’t really found a solution or reason for our Paul Ricard struggles.

“So we expect our race pace to swing up and down, depending on the circuit. Then we’ll really find the reason why that happened in Paul Ricard.”

After having lap times deleted for running wide during qualifying at the last two races, Lance Stroll says that gravel provides the ideal, physical solution to drivers exceeding limits.

“Instead of messing around with these track limits by one millimetre, you’re off and you can’t really see it from the cockpit and all that stuff, which is silly.”

Ferrari and McLaren out of reach for Alpine this season

Esteban Ocon says it’s clear Alpine are not contenders for third place in the constructors championship as the former Renault team was last year.

“I was fighting with Charles [Leclerc] in some part of the race and he was much too fast compared to us, for sure.

“We are going to be fighting with AlphaTauri and Aston Martin all the way through the season. They seem to have a little bit more pace than us overall.

“So little by little we need to be scoring points and do the best we can.”

Giovinazzi: undercut and early-race gains failed to compensate for spin

Antonio Giovinazzi Styrian Grand Prix was ruined before the end of lap one, when he was spun at turn four following contact with Pierre Gasly. The collision was neither drivers’ fault but Giovinazzi said it effectively ended his chances in the grand prix.

“It was bad luck because I think after that, my race was quite compromised,” said Giovinazzi. “I pushed quite a lot in the beginning to catch the group, to overtake the two Haas and then we did the undercut on the hard.

“Maybe we pitted a little bit too early but we tried to undercut. But then in the end of the race, my tyres were in a good shape, and yeah we were too slow in the end. But I think my race, to be honest, was compromised from lap one.”

This one hurt. Every single member of the team should hold their head high today. We were up there on merit. Racing can be brutal but we keep fighting.

So bittersweet. One of my best performances with heaps of overtakes but should have been higher without the contact with Pierre. A shame about what happened but we've spoken and everything is ok. Our speed looks good for next weekend and thanks for your Driver of the Day votes 👊 pic.twitter.com/OZ2kJTw3c3

Sports fans warned: you will be guinea pigs at UK summer events (The Guardian)

"I’m not sure people buying tickets are fully aware that there is a risk involved, and that the purpose of the event is to measure what dangers are posed."

"I learned how to be opportunistic. To see the opportunities and go for them straight away, without waiting one or two laps, and without overheating my tyres."

"The British driver started fourth on the grid and led for the majority of the race holding off Alex Connor and Roberto Faria, with the trio covered by half a second at the flag. Pole sitter Reema Juffali had her best race in the series so far to claim fourth, with Elite Motorsport pair Jose Garfias and Tom Lebbon completing the top-six."

"Ollie Bearman won his fifth successive Italian Formula 4 race as Cenyu Han had a spectacular accident that caused a red flag at Vallelunga. Bearman got a good start and resisted pressure from Prema’s Sebastian Montoya in the opening moments of the race before a safety car was brought out for separate incidents involving Samir Ben and Erick Zuniga."

The past few years, most of the races Red Bull won were super tight or steals (down to some bad luck for Mercedes or strategy errors).

But this race was proper dominance, like Mercedes used to do so often.

I don’t recall ever hearing Lewis ask “what should we do” and getting no real answer from Bono in regards to having a chance to win a straight-fought grand prix.
@gechichan