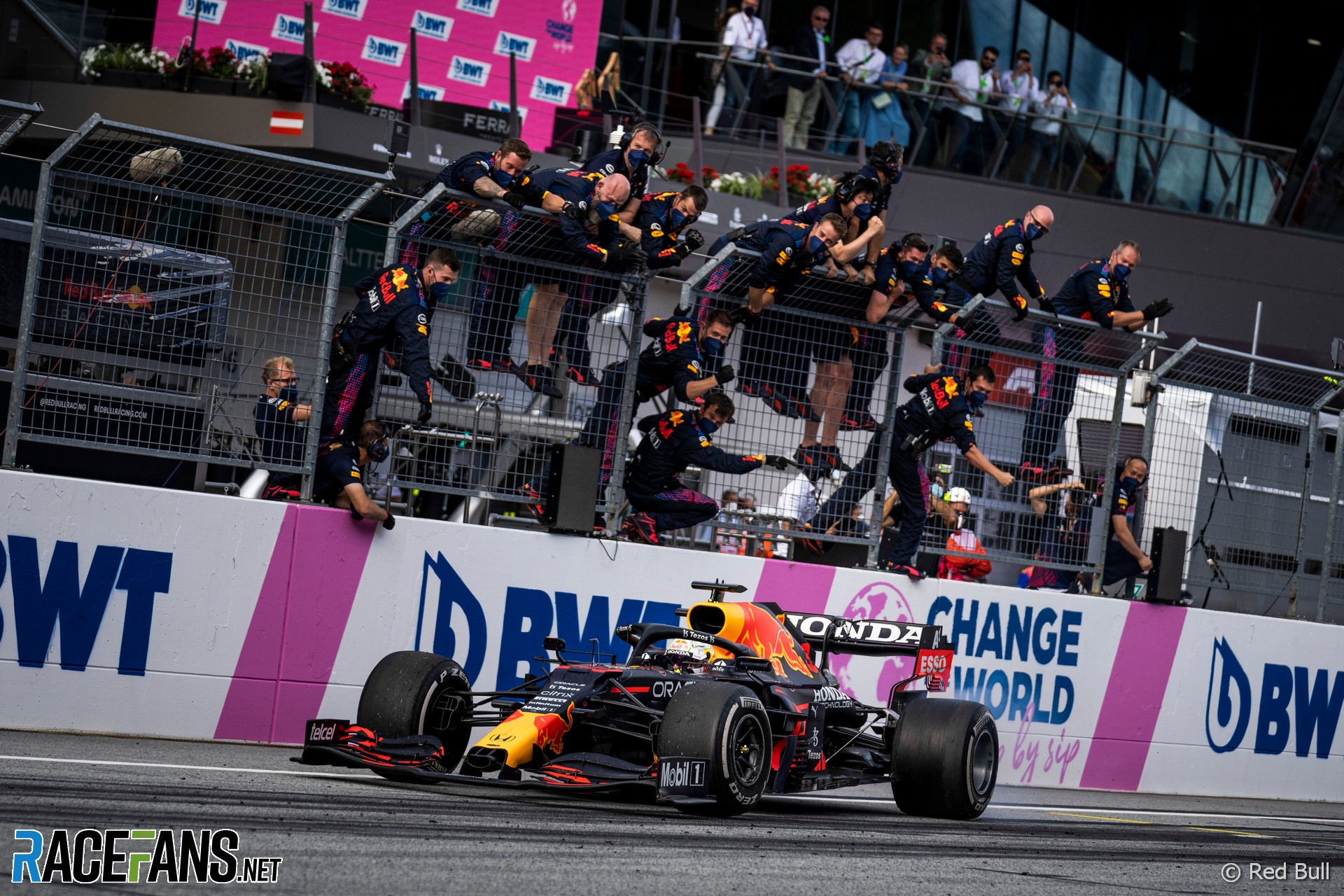 The Red Bull driver celebrated his fourth victory of the 2021 season by coming to a stop near his crew, whose pit wall perch was situated a short distance after the finishing line. Verstappen then lit up his rear tyres and drove off.

Masi didn’t like what he saw and let Red Bull know “as soon as it happened”, that he considered it a safety risk.

“It was not an ideal situation, which is why I spoke to the team immediately and told them accordingly that something that would not be tolerated in future,” he explained.

What was Masi concerned about? And if Verstappen’s transgression was so serious, why was he not penalised on the spot?

The sporting regulations make it clear the race-winning driver “may perform an act of celebration before reaching parc ferme” but only if it “is performed safely and does not endanger other drivers or any officials”.

The potential risk in what Verstappen did is clear. He stopped his car within a very short distance of the finishing line, at a point which Formula 1 cars ordinarily approach at 300kph (186mph). Any driver accelerating towards the finishing line while racing a rival for position could have been in danger of hitting the Red Bull.

Coincidentally, the first driver to pass Verstappen’s stationary car has first-hand experience of the dangers that presents at the same circuit. In 2015 Nicholas Latifi struck Roberto Merhi’s car at the end of a Formula Renault 3.5 race:

Both drivers walked away from the crash, though both had a nasty shock, and Latifi in particular was fortunate not to have been launched into the gantry above the circuit. The impact was as if a bomb had gone off, debris exploding into the air. Had something similar happened in the vicinity of Verstappen’s celebrating crew the consequences could have been appalling.

Merhi was held responsible from the crash and as well as being disqualified was forbidden from starting the second race later the same day.

Did Verstappen put himself, other drivers and his team at risk of similar danger on Sunday? There are significant differences between the two cases.

While Verstappen had won the race and was celebrating, Merhi’s motives in pulling up after finishing fourth weren’t obvious and his rivals had no reason to expect it. While Verstappen stopped close to the pit wall, Merhi was closer to the racing line – it seemed his intention was to lay rubber across the second-place grid spot, from which he was due to start the afternoon’s second race, in order to improve his getaway.

In the 2015 race Latifi began the final lap just over a second behind Merhi but his attention was taken up with fighting off a late-race attack from Tom Dillmann behind. Preoccupied with his fight for position, he didn’t notice Merhi stopping his Pons car ahead of him until it was too late.

Verstappen won Sunday’s race by 35 seconds – as he reached the end of the pit straight after taking the chequred flag Lewis Hamilton was back at turn seven. Other lapped cars did pass, however, and Verstappen had no way of knowing whether those behind might notice him suddenly slowing.

While Merhi showed no regard for the safety of his competitors, Verstappen’s actions clearly presented less of a danger. He was further away from the racing line, only stopped very briefly, and significantly slowed for around 10 seconds at most, during which time two drivers – Latifi and Lando Norris – passed him.

The stewards’ decision not to punish Verstappen is understandable. Yet the Merhi case shows the potential risk is much greater in circumstances which are only slightly different.

Masi has to consider not only what is safe practice in Formula 1, but the example it sets to junior drivers. Doing something like this in junior series, with larger, more tightly-packed fields of less skilled drivers, would clearly be more risky.

An unsighted driver hitting a much slower car ahead is one of the most dangerous scenarios in motorsport. Billy Monger’s crash into the rear of Patrik Pasma’s car at a British Formula 4 race four years ago – in entirely different circumstances to the above incidents – cost him his lower legs.

What Verstappen did may not have been dangerous, but the precedent set by allowing it to continue could be, which explains the FIA’s determination that it will “not be tolerated in future”.

51 comments on “Is stamping out ‘burn-out’ celebrations a killjoy over-reaction?”