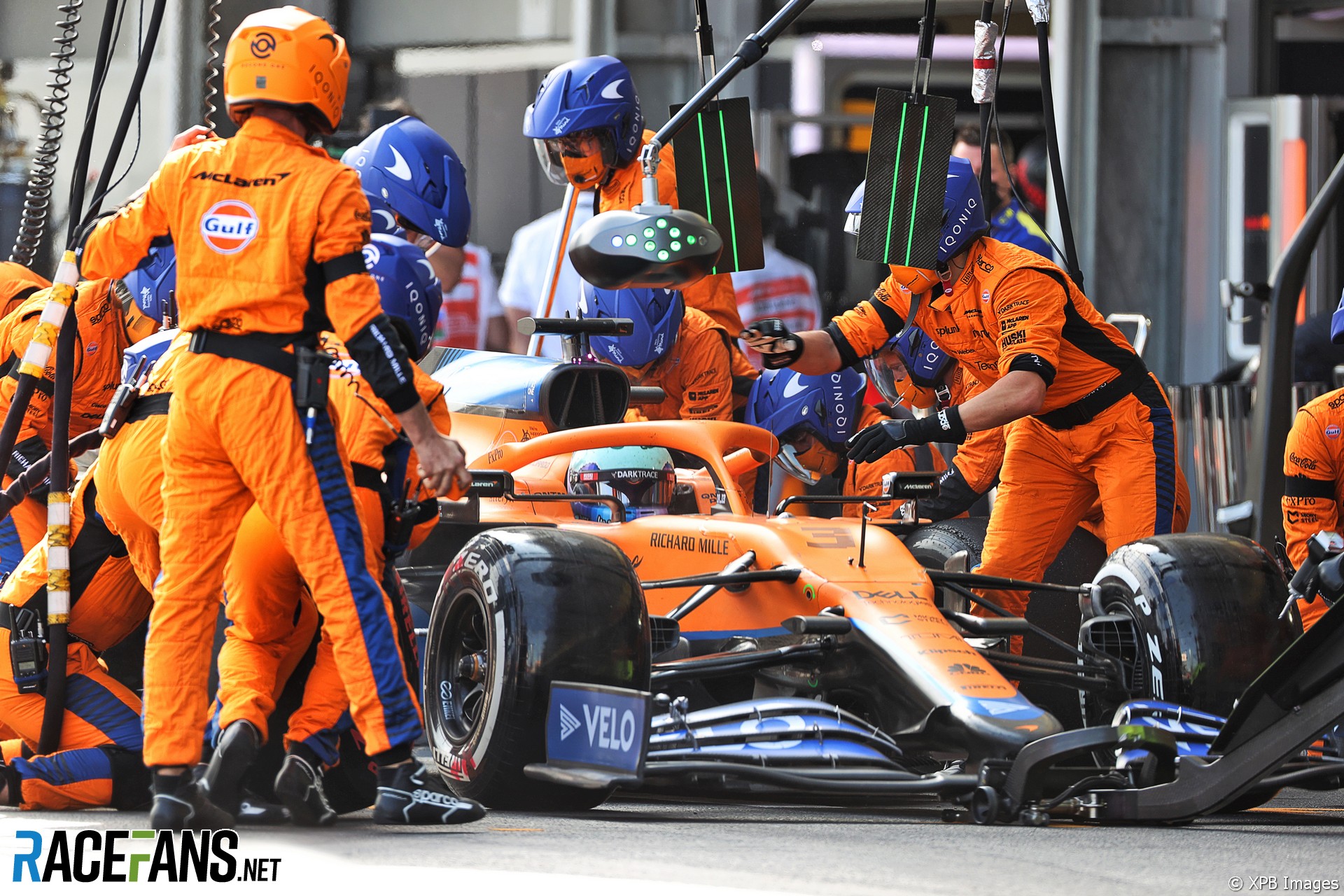 As RaceFans revealed last month, the FIA notified teams via a technical directive it intended to introduce new rules ahead of the upcoming Hungarian Grand Prix forcing them to slow down their pit stops. Some teams have consistently performed tyre changes in less than two seconds, but concerns arose over whether these were being done safely.

However as revealed last week, the changes are to be watered down. A revised version of the technical directive issued to teams indicated the plan to specify minimum reaction times at certain stages of the wheel change process had been abandoned. The introduction of the new rules will also be delayed until after the summer break, a move Seidl welcomed.

“It was a good, constructive discussion between teams and the FIA,” he said. “And in the end, due to the special situation that we are in also with Covid – that it is not so easy to go back to the factories at the moment and train together with the crew all the changes that were in the TD initially – I think it made sense in the end to delay it and use the longer break and give every team more time to be prepared for the change.”

Jaguar has become the latest manufacturer to confirm it will continue to compete in Formula E following the introduction of its new, third-generation cars which will arrive next year. Jaguar Land Rover CEO Thierry Bollore said the championship “is already proving to be the perfect environment to design, collaborate, test and develop new sustainable technologies at pace.”

Ahead of this weekend’s penultimate double-header round in London, Jaguar driver Sam Bird holds a five-point lead in the championship. Jaguar lies third in the teams championship, five points behind Virgin.

Venturi team principal Susie Wolff had to endure a frustrating weekend in New York, after the team had emerged triumphant in Puebla to take two podiums and the drivers’ title lead for Edoardo Mortara. The team scored just six points in Brooklyn, all for Norman Nato, as Mortara fell to fourth in the standings.

Going in to the London Eprix, Wolff said the novel track layout, around and through the gigantic hangars of the ExCel Centre, might throw up opportunities for the underdog Monegasque team. “As the penultimate race weekend of the season, the London E-Prix is of crucial importance – scoring well at the ExCeL will be essential to set up August’s finale in Berlin.

“London is going to be very challenging for the drivers, not only due to the varying surface grip levels inside the venue versus outside, but also the height variations of the track especially the down hill section at the start – which I’m sure will make it very interesting for the fans to watch.

“As with any new circuit, completing consistent running throughout practice will be important to establish a performance baseline and hopefully, we can be in the mix and threaten for big points.”

"I am not suggesting for one moment that Christian Horner was implying anything racist in what he said. He was talking in pure racing terms and not racist terms and that is obvious."

Though not surprised, the Melburnian was left disappointed that he’ll not have a chance to return to his homeland this year.

Trulli joins Carlin for Imola round of Euroformula Open (Carlin)

"Making the big step-up to Euroformula Open in 2021, the Formula 4 champion’s best result of the season so far has been a third place at the season opener in Portimao in May."

"The Nürburgring is cancelling the planned weekend events for the time being up to and including 8 August. These include the FIA World Rallycross Championship and the ADAC Racing Weekend (30th July - 1st August) as well as the ADAC GT Masters (6th - 8th August). The reason for the cancellation is the continuing emergency situation in the district of Ahrweiler and the stationing of various emergency forces at the Nürburgring."

"If a serious crash happens in the coming months, the entire sport will look back on this war of words and wonder if more could have been done to reduce the temperature."

"My cane is probably the most important item here. I am still using the cane during race weekends. I do not need it to walk, but it helps me to control the inflammation in my foot so that I am saving energy throughout the weekend and leaving all of the energy for driving."

It’s clear how Fernando Alonso should approach racing following his latest complaint about the standard of stewarding, says @Petebaldwin:

The precedent F1 has set is that if you can weave all over the track and after doing it several times, they’ll give you a warning – after that, your team will radio you and tell you to stop doing it. Their job is to maximise everything out there on track and therefore, it’s only logical for them to weave to break the tow until they are warned.

Same as track limits – you can do it a number of times before you get a warning so when you’re trying to make a gap or just before a pitstop, ignore track limits to gain a few extra tenths
@Petebaldwin