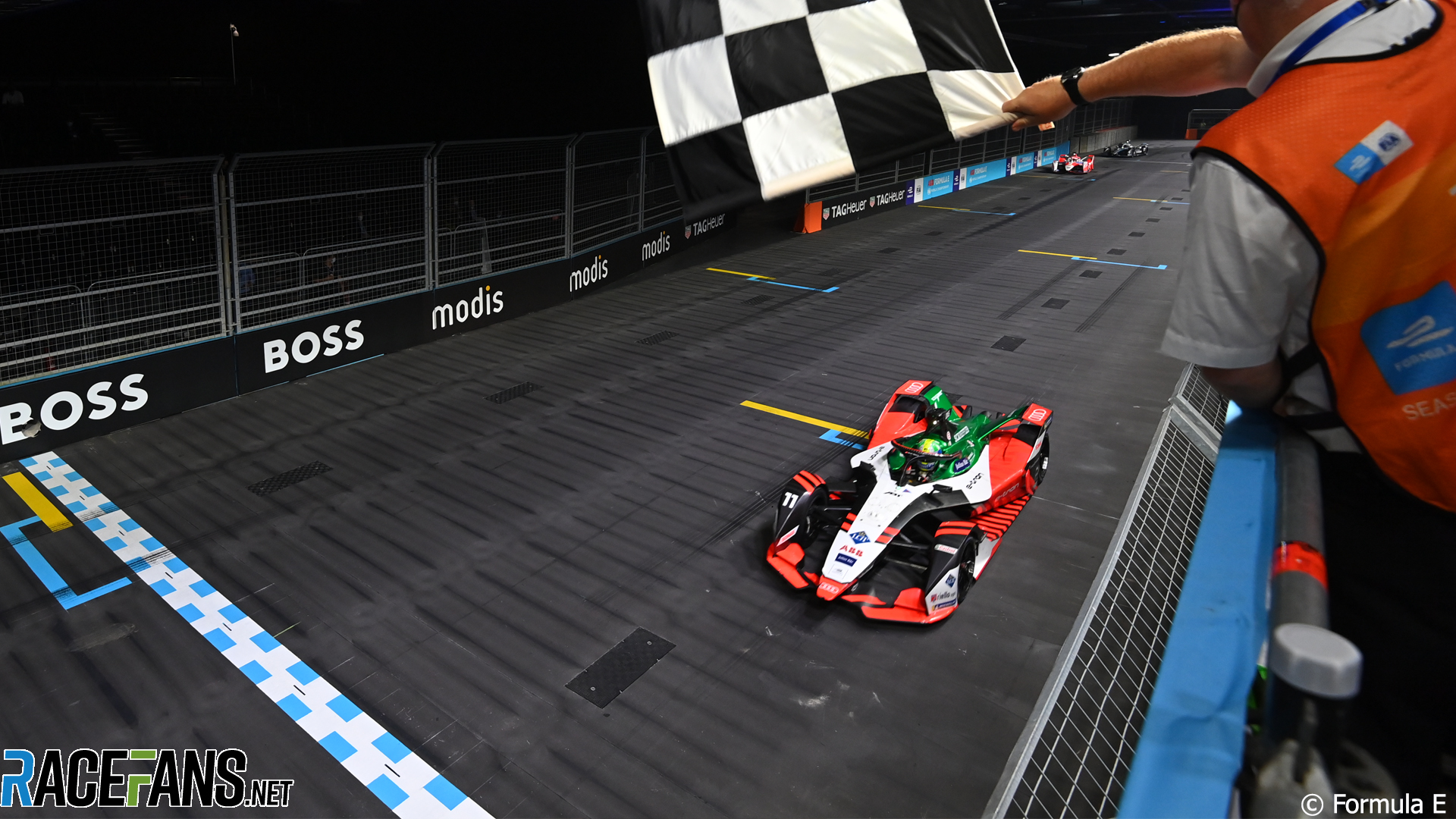 The Audi driver only learned after the race he’d been disqualified for failing to take a drive-through penalty which he was given for the move.

Drivers are allowed to pit under safety car in Formula E. Normally it would not give an advantage, but Di Grassi’s team exploited unusual circumstances on Sunday to move him into the lead.

Unlike typical Formula E circuits, the pits run parallel to the start/finish straight on the ExCel track. A crashed car in the run-off at turn one slowed the field more than usual behind the Safety Car.

Audi realised it was therefore quicker for Di Grassi to go through the pits, come to a brief stop in front of the Audi garage, than to drive behind the Safety Car.

Speaking immediately after the Eprix, Di Grassi said he intended to stop his car in the pits but had been caught out by a slippery floor surface.

“There are rules, obeyed, 100 percent,” he told RaceFans. “The only reason we got a penalty is because when I was stopping in front of my garage, I was sliding a bit because it’s so slippery this floor. And because I was [going] one or two kilometres per hour, they used that to give me the drive-through. Otherwise I would have won the race.”

Di Grassi revealed he did not know about the drive-through penalty and had crossed the line believing he had taken a victory. “I was not aware of the penalty until after the race,” he confirmed. “So it was the team’s decision not to communicate and I have to do what the team kind of tells me.

“So I was driving for the win and I thought I really won the race when I finished it.”

Di Grassi said the team had considered before the race whether it might be worth making a pit stop during a Safety Car period. “We looked before, but that move would not have worked if the Safety Car was faster,” he said. “Otherwise, you lose positions. You can do it, but you have to have the chance of losing positions as well. It was not something that is guaranteed.”

He said the penalty call was irrefutable. “It’s very clear. In the end, the data shows that although the wheels are locked, I was sliding a bit. I feel very sorry because it was a clever move and I missed a win, another one because of such a small detail.

“I think everybody is trying to be clever and try to find ways. And we are obeying the rules 100 percent. So if something like this shows up again in any other area, I think if we don’t use it, somebody else will use it.

“Probably this rule will change or the light at the end of the pit lane will be red under Safety Car. It’s very simple to change and there was a risk that the light would turn red at my stop as well.”

“We thought it was a risk worth taking and would have been a championship move,” he added.