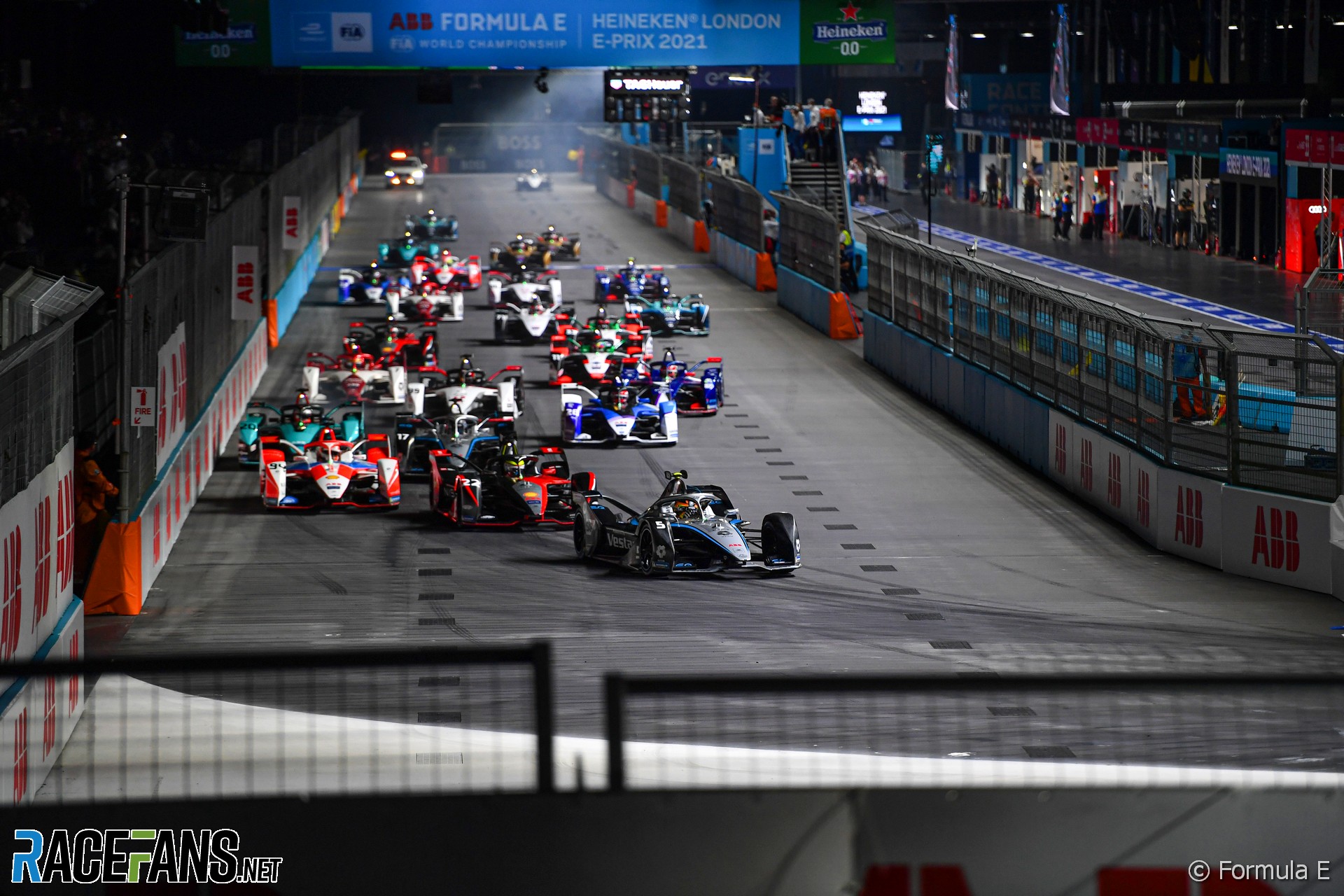 Alex Lynn completed a British double-win in the second of two Formula E races in London this weekend, scoring his first victory in the category.

He followed Jake Dennis’ Saturday triumph on the new course around the ExCel Arena in the British capital.

Sam Bird came into the weekend leading the standings but endured a difficult home race weekend. He had to qualify in group one, started near the back in the first race where he suffered damage and dropped out.

Following the opening lap bumping, Saturday’s race was relatively pedestrian. Lynn had won pole position but lost out to Dennis during his first Attack Mode activation and the Mahindra car’s efficiency left him prey to Nyck de Vries on race pace.

Lynn reached the Super Pole shoot-out in qualifying for the second race but wasn’t able to repeat his pole position. Stoffel Vandoorne started Sunday’s race at the front with Oliver Rowland alongside him. Lynn lined up third, De Vries fourth.

Vandoorne got away ahead and was able to pull out a small lead while Rowland and De Vries battled behind him. Lynn slipped backwards, the Mahindra not seemingly able to battle the other frontrunners on pace.

Just five minutes into the race, De Vries told the Mercedes pit wall his steering was damaged, although he was able to continue. Shortly afterwards the race was neutralised when Sebastien Buemi and René Rast clashed at turn 10, debris falling off Rast’s car all over the track. Racing restarted with 33 minutes to go, and drivers given a 3kWh energy reduction.

Buemi was issued a 10-second stop-go penalty for the collision, although he had effectively retired from the race by that point. Just 10 minutes later racing was once more interrupted by a Safety Car, this due to Andre Lotterer crushing Antonio Felix da Costa’s car into the wall at the end of the start/finish straight.

During the latest interruption, Lucas di Grassi made an audacious bid to take the lead of the race. The Audi driver pitted from eighth in the queue, briefly stopped at his pit box and emerged in front of his rivals, by virtue of the London course’s short pit lane and the fact drivers had to follow particularly slowly behind the Safety Car past Da Costa’s car in the run-off area.

Di Grassi was placed under investigation for the move, keeping the race lead at the restart with Vandoorne and Rowland behind him. But a turn 10 tangle between the pair put Vandoorne out of the race and relegated Rowland to the back. Günther and Evans clashed at the next corner, avoiding Vandoorne and Rowland, promoting Lynn to challenge De Vries for second place.

The top three pulled out substantial leads while Evans held back the back, battling with Günther and exchanging fourth place several times. De Vries’ car trouble meant he wasn’t able to keep pace with Lynn and Di Grassi ahead.

As the race entered its final quarter-hour, Di Grassi was issued a drive-through penalty for his pit lane stunt. However his Audi team kept him on-track and as a consequence, he was shown a black flag on the final lap. Lynn therefore took the win ahead of De Vries, while Evans survived the fight behind, despite having missed Attack Mode on his first attempt at activation.

De Vries assumes the title lead, going into the final two rounds of Formula E’s first world championship season, in Berlin next month. Bird was awarded a three-place grid penalty for the first Berlin race after the collision he had with Norman Nato.