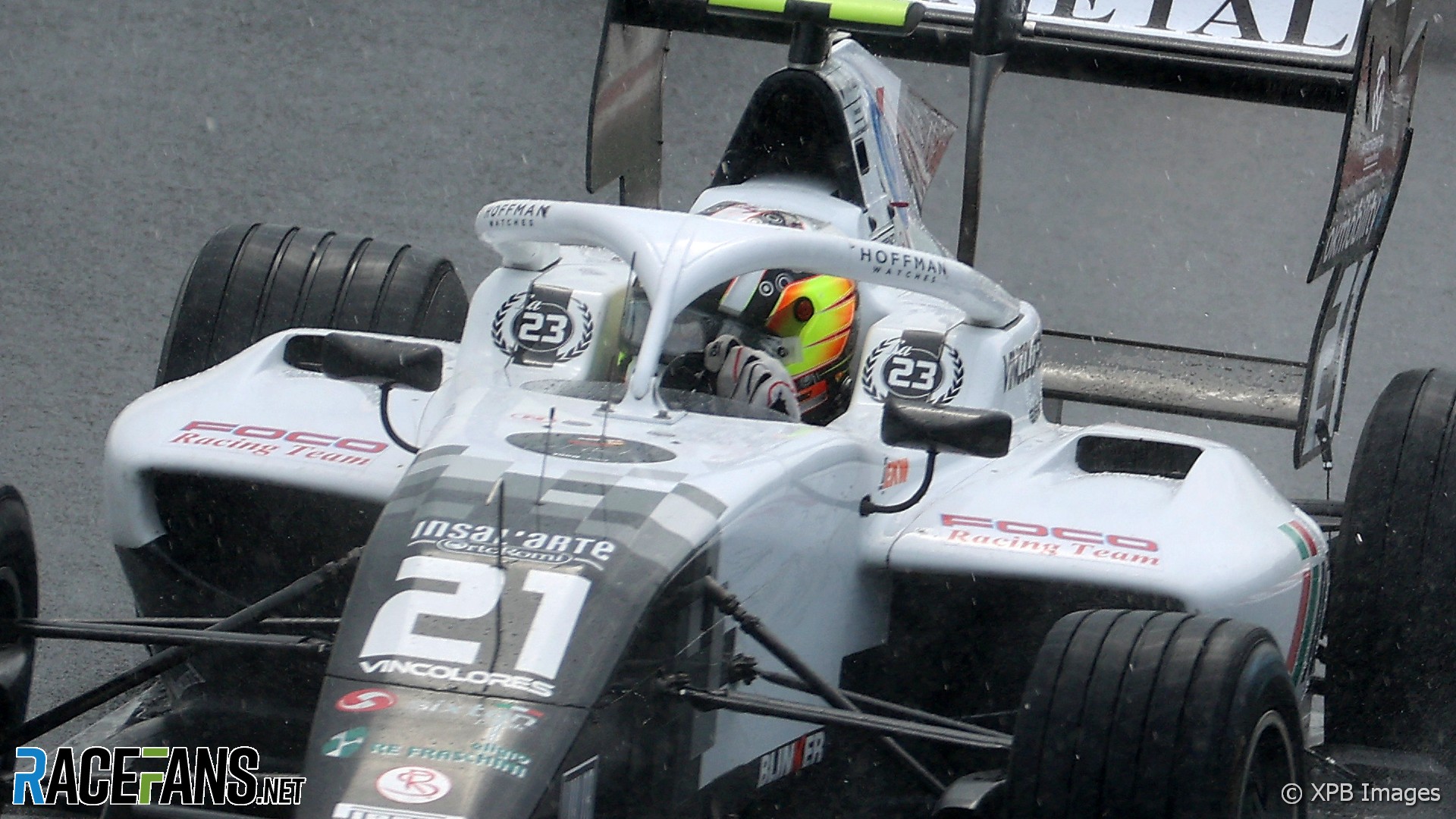 Lorenzo Colombo avenged his lost victory in Budapest with a lights-to-flag victory in wet conditions at Spa.

The Campos driver started from pole position on the partially reversed grid by dint of qualifying 12th yesterday. Jak Crawford lined up alongside him with Roman Stanek and Johnathan Hoggard on the second row. Championship leader Dennis Hauger started 14th, with fastest qualifier Jack Doohan in 12th.

The start was delayed due to heavy rain falling in the pit lane. Thick fog also meant the medical helicopter was unable to fly at the designated start time and so drivers sat in the pit lane waiting for the formation lap. They eventually got underway 25 minutes after the expected race start.

When drivers set out on their laps to the grid there was substantial standing water around the seven-kilometre track and huge plumes of water were sent up by the cars. By the time they lined up behind the safety car conditions were, if anything, worse.

The cars drove three laps behind the safety car, which were subtracted from the race distance. After the third lap, the start procedure was suspended temporarily, drivers returning to the pit lane, as the conditions had deteriorated.

Following a short break, the cars set off for another formation lap, where conditions seemed largely unchanged. However, the pit walls reported the rain clouds had moved away from the circuit and despite the extremely wet conditions, the track would soon begin drying. Nonetheless, Clement Novalak told his team: “It’s just as bad as before, if not worse.”

The Safety Car came in after three laps, leaving a 15-lap race to the flag. Colombo got away cleanly, drivers falling into a relatively easy order

Caio Collet and Logan Sargeant brought the first action of the race, battling with Victor Martins through Les Combes, both managing to pass. Collet carried on his progression up the order, clearing Novalak for seventh on the second racing lap and moving on to hunt down Frederik Vesti.

The only two retirements of the race came relatively early on. Ido Cohen’s car had a mechanical glitch, the Carlin racer retiring almost immediately after the race start. Rafael Villagomez spun backwards into the barriers out of Les Combes, bringing out a yellow flag. He was able to get the car going again to crawl back to the pits, leaving the race uninterrupted.

On lap nine, Martins made an impressive move on Novalak, passing him just before the ascent through Eau Rouge. By lap 11 a three-way fight for fourth place was taking place, Vesti having escaped Collet’s clutches and trying to move forwards, through David Schumacher and Hoggard.

Hoggard and Schumacher went up Eau Rouge side-by-side on lap 13, with Collet behind running off-track on both sides as they climbed the hill and emerged onto Kemmel. Having narrowly avoided the barrier, he squeezed back onto the circuit further up the queue of cars. Collet then went through Les Combes around the outside of Hoggard.

The stewards swiftly announced Collet was under investigation for gaining positions off track. It was his second investigation of the race, following an alleged unsafe release during the extended start procedure. The Raidillon move earned him a five-second penalty, dropping him to ninth.

Vesti re-took fourth on the entry to Eau Rouge the following lap and held on despite pressure from Collet. At the front of the grid, there had been no change between Colombo, Crawford and Stanek – Colombo, in particular, had been able to build a healthy, 13-second lead to come across the line to take the chequered flag for his first victory. This time, seemingly, to keep it.