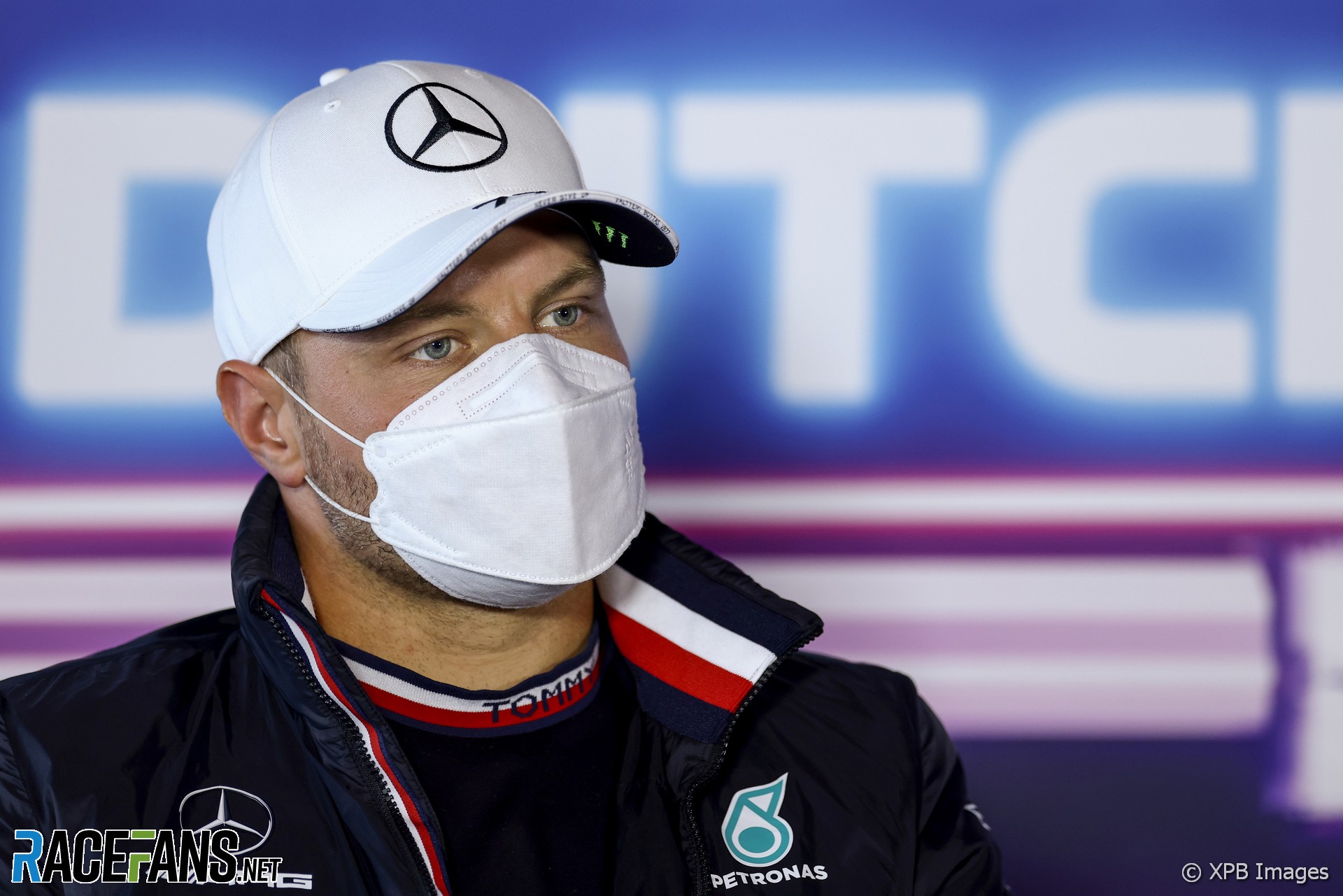 In the round-up: Valtteri Bottas says that the camber of Zandvoort’s high-speed, banked corners will suit Red Bull.

Bottas believes the Red Bull car has better balance through cambered corners and so will suit the revised turns three and 14 at Zandvoort.

“I feel like it’s quite a good track for Red Bull, no doubt,” said Bottas. “Their car is always good when there’s cambers, off-cambers and it feels like the car is maybe a bit more stable in those kind of corners.

“But we’ll find out. On paper [it’s] all to play for and we’re going to be fighting for the win.”

Steiner: calendar changes will be cancellations not moves, now

Haas team principal Günther Steiner does not believe there is any flexibility left in the F1 calendar and any further issues will lead to race cancellations.

“If there [are] changes, I think there will be more cancellations and not any changes anymore because we are just running out of weekends at the moment, there is not a lot you can do anymore,” he said.

F1 CEO Stefano Domenicali remains keen to see out the calendar as it stands, said Steiner “If something will happen, depending always on the Corona, at the moment FOM and Stefano, they are pushing hard to get this calendar to the end like it is now.

“But you never know. As we saw last weekend, we don’t have nature in control. So if the pandemic hits hard in one of the countries we are going, I think the only option is to cancel the event.

“I don’t think that is a big option to change it to another place because there’s just not enough time if you think in a little bit more than three months that the season is over.”

Visser cleared to race at home W Series round

Both drivers who were taken to hospital following the dramatic crash during W Series qualifying last weekend at Spa have been cleared to race at the championship’s Zandvoort round.

Beitske Visser described herself as “a bit sore” ahead of her home race this weekend. “But I’m excited to be back racing.”

“[It’s] really cool to see so many Dutch fans here,” she added. “It’s been a long time since F1 has been in Holland, so I expect a lot of people here this weekend. So hopefully that gives me a little motivation.”

Max Günther has filled Oliver Rowland’s vacant spot at the Nissan e.Dams Formula E team. Three-time race winner Günther had been with the BMW Andretti squad for two years but split from them following BMW’s exit from the sport at the end of the last season.

Günther will partner Sebastien Buemi. “It makes me feel very proud to become part of the Nissan e.dams family,” said Günther. “The team has high ambitions in Formula E and I am full of motivation to contribute to the success of this project.”

When drafting this letter to the FIA back in 2000, we seemed to have a pretty good hunch how things would take shape in the years to come! Thanks for all the joy you have brought to us, #KimiRaikkonen #F1 #FIA #archivetreasures pic.twitter.com/47CQg2Ol2S

This has to be Kimi #Raikkonen's worst nightmare. He'd far rather walk away at the last race and never return. Now he faces half a season of how does it feel for last this, last that, best this, best that, regrets? On and on Nightmare. Oh yes…and what's your best radio message?

Belgium shambles needs some answers from Formula 1 (The National)

"The most frustrating aspect of Spa 2021, though, was not ‘the race that never was’ but the chaotic shambles it became. The biggest error, to my mind was forcing the grid out twice when half a dozen laps first time around would have sufficed."

"Jonny Edgar has been Carlin Buzz Racing’s strongest performer in 2021, but with just two rounds of his rookie season to go, he says he’s as focused on increasing his experience as he is scoring points, revealing that 'it’s looking like' he’ll return for a second season of Formula 3."

"It was very painful. Everything was kind of under control and then to be taken out by someone when you are in the lead of the race... that just really hurts a lot. I think it was maybe more painful than other races because I realised that we were getting closer to the end of the championship."

After the non-event that was the Belgian Grand Prix, Imre asks if parc fermé rules should not be changed when the conditions do?

I am constantly baffled by the parc fermé rule in these situations. Acclimatisation can be achieved by multiple formation laps so a warmup is replaced this way.

We could have a rule that there is no parc fermé in case of a wet race. They could announce whether the race is declared wet two or three hours before the race. That is enough time to re-set-up the cars. There could also be a minimum ride height for a declared wet race to reduce the chance of aquaplaning.

Of course this would mean no one ever sets up their car anticipating a wet race but I don’t think they do it anyway.
@f1mre