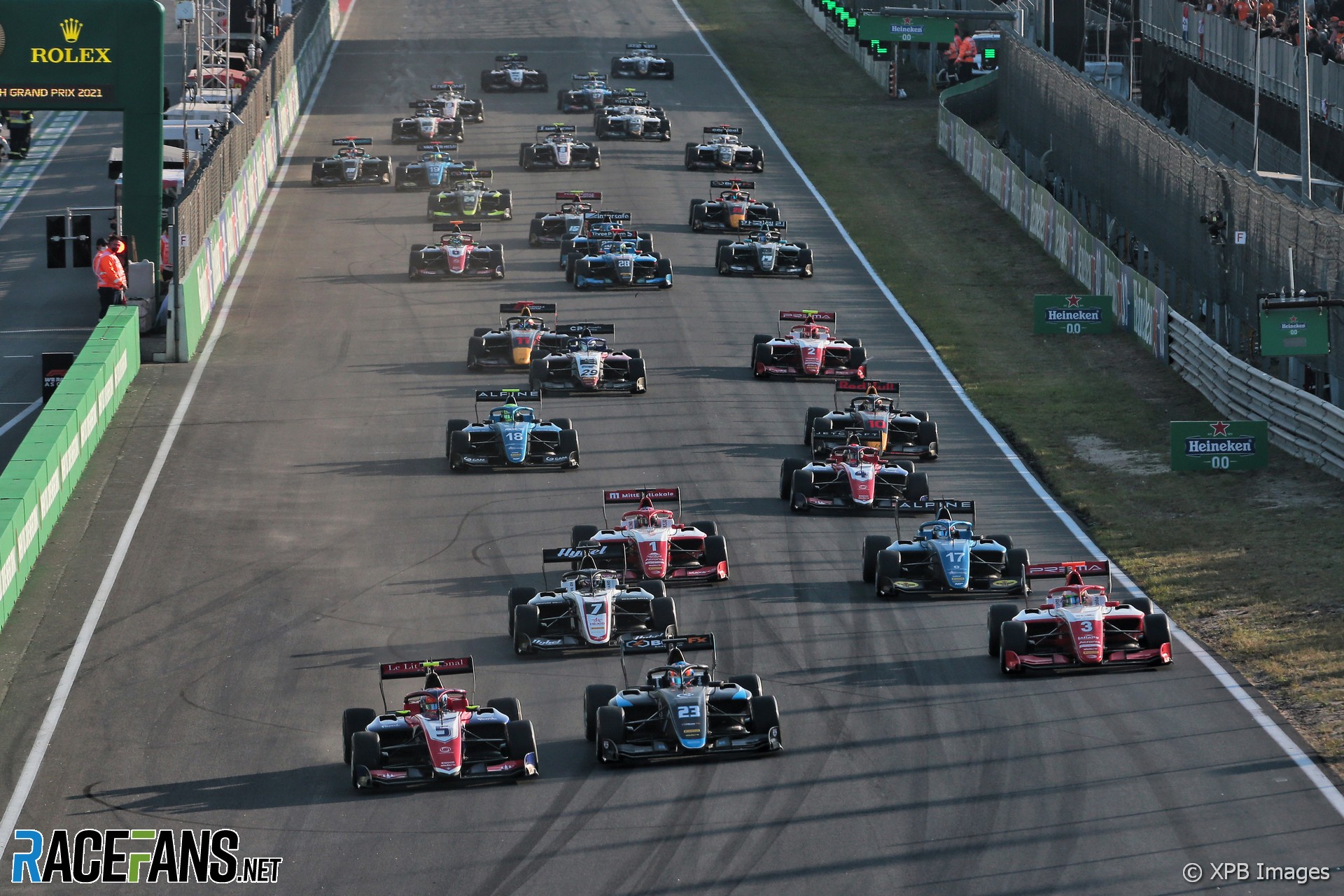 Victor Martins has taken his first F3 win in the second race at Zandvoort, while the title leaders suffered late-race disasters.

Ido Cohen had started from the partially-reversed grid pole by finishing 12th in race one, with Clement Novalak alongside him. Olli Caldwell and Frederik Vesti took the second row, with title leader Dennis Hauger starting sixth, rival Jack Doohan seventh.

Novalak took the lead at the start, Cohen hanging on to second while Caldwell lost out, slipping down to fifth on the opening laps. By the start of lap 3, Hauger was duelling with Prema team mate Caldwell into turn two and then Hauger was very nearly able to pass on the exit of turn three, Caldwell clinging on.

The battle was neutralised when Lorenzo Colombo crashed in turn two, with first a yellow flag in sector one and then a full safety car to put the brakes on Hauger’s attempt to move forwards. Colombo had sustained a puncture from what had seemed like very light contact – a warning to drivers defending too hard through turn one.

The safety car came in on lap five and Novalak was able to hold the lead while behind him Victor Martins shot up the order to take third place from Vesti, coming around the inside of turn three at immense speed. Less successfully, Jack Doohan, then in tenth, made a move on Jak Crawford for ninth on lap seven that led to Crawford locking up and the two banging wheels through the final banking.

Martins was able to improve his position again, going past Cohen for second through turn one and making the pass cleanly stick. Vesti took third place from Cohen through the final corner of the lap, relegating the pole sitter from the podium and sending him into a tightly-fighting pack.

Seemingly unstoppable, Martins continued up the order to take Novalak through turn one of lap 16, claiming the lead. Hauger finally passed Caldwell, up the inside of the last banked turn, on lap 17 after an impressive defense, lap after lap, by Caldwell. Hauger continued up the order to take fourth from Cohen on the following lap, seeming to have more traction than any other car could muster through the banking.

Amaury Cordeel ended up beached in the gravel around Tarzan and the safety car deployed on lap 20. Racing resumed on lap 23 and Martins got away with the lead, Vesti challenging Novalak for second behind but nearly losing out completely into turn two, Hauger on his heels.

Hauger sustained a right rear puncture on the penultimate lap after contact with Cohen through the top of turn three’s banking and fell down the order, totally out of the points. It might have proven disastrous for his lead had, on the final lap, Jack Doohan, who was set to gain hugely from Hauger’s loss, not gone off the road through turn eight and sabotaged his own chance of points.

Martins, oblivious to the chaos behind him, took the chequered flag, followed by Novalak and Vesti. Martins’s victory is a home win for Dutch F3 team MP Motorsport.