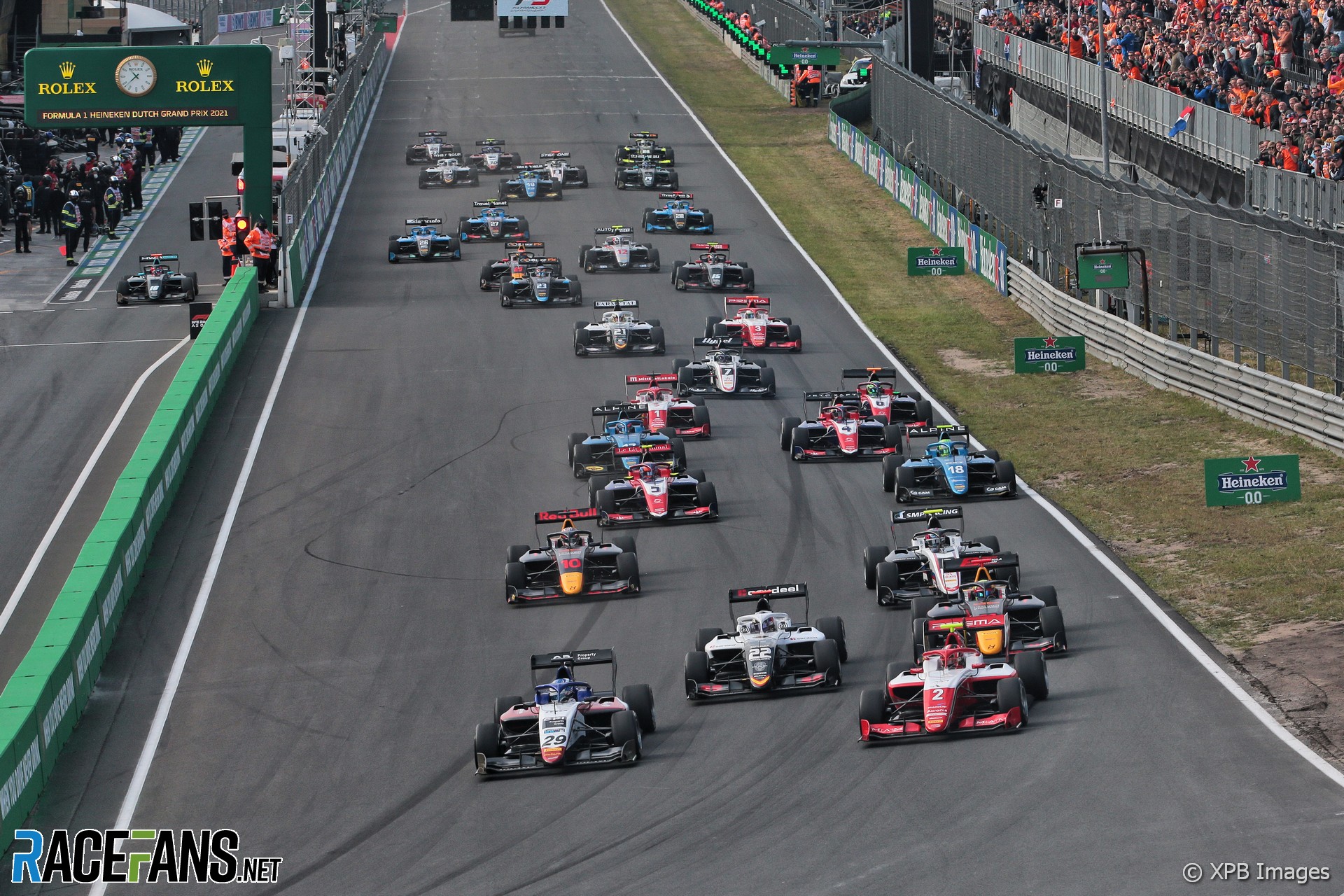 Arthur Leclerc scored his second victory in Formula 3 after making a bold double overtake into Tarzan at the start of the weekend’s opening race.

Amaury Cordeel started from pole position on the partially-reversed grid, having qualified 12th, with Logan Sargeant alongside him and Leclerc on the second row with Ayumu Iwasa on the second row. Championship leader Dennis Hauger had taken pole for Sunday’s race, putting him in 12th for race one with closest points rival Jack Doohan in eighth.

Sargeant got an excellent start but Leclerc had a better one, going from third to first in turn one, sweeping around the outside of the front row starters.

Cordeeel’s race was ruined when he tangled with Alexander Smolyar in the banked turn three. The stewards ruled Smolyar was to blame, issuing him a 10-second penalty.

Hauger was up to eighth by the middle sector of the lap, scrapping around the outside of turn 11 with Victor Martins. Although Hauger stayed close, Martins resisted and held his position.

Smolyar’s front wing was hanging off after the contact with Cordeel which meant another sanction from the stewards – he was shown the black-and-orange flag on lap five, summoning him to the pits for repairs. He took his 10-second penalty at the same time as replacing it, counting himself out of any further chances in the race.

Sargeant had not given up on harassing Leclerc by the time DRS was activated on lap five. Leclerc made an error out of turn three, putting his right wheels into the dirt and spreading it across the track and nearly allowing Sargeant past.

By lap seven, under constant pressure, Leclerc locked up through turn one and again nearly lost the lead to Sargeant, the pair running nose-to-tail through a high line around the turn three banking.

On lap 14 Hauger made an attempt into turn 12 to take seventh from Martins but went off-road, skidding through dirt and ending up behind both Martins and Novalak, the MP driver narrowly avoiding him. Hauger tried to cut back against Novalak down the pit straight but his rival was able to stay ahead into turn one and keep the position.

On lap 16 Jonathan Hoggard and Hunter Yeany tangled at Tarzan, breaking the Jenzer driver’s suspension. From there Hoggard went into the wall while Yeany continued until a punctured tyre put him into a barrier at the next turn.

The Safety Car returned to the track, to the annoyance of Leclerc who complained it was “so slow” while drivers waited for gravel to be swept away by marshals.

The racing restarted on lap 21 with four to go and Dennis Hauger was finally able to make a move forward, taking the highest possible line around the turn three banking and passing Martins for seventh. At the front, Leclerc kept the lead and was able to build up a small margin, onto lap 23.

Taking the final lap, Leclerc looked relatively free of pressure from Sargeant as Iwasa and Crawford came to breathe down the Charouz driver’s neck. Leclerc crossed the line comfortably ahead, Sargeant holding on to second and Iwasa claiming third over the line.

Hauger’s seventh-place finish, with Doohan’s sixth, means the title lead is cut to 28 points. Ido Cohen’s 12th place will put him on pole for the second F3 race this afternoon.