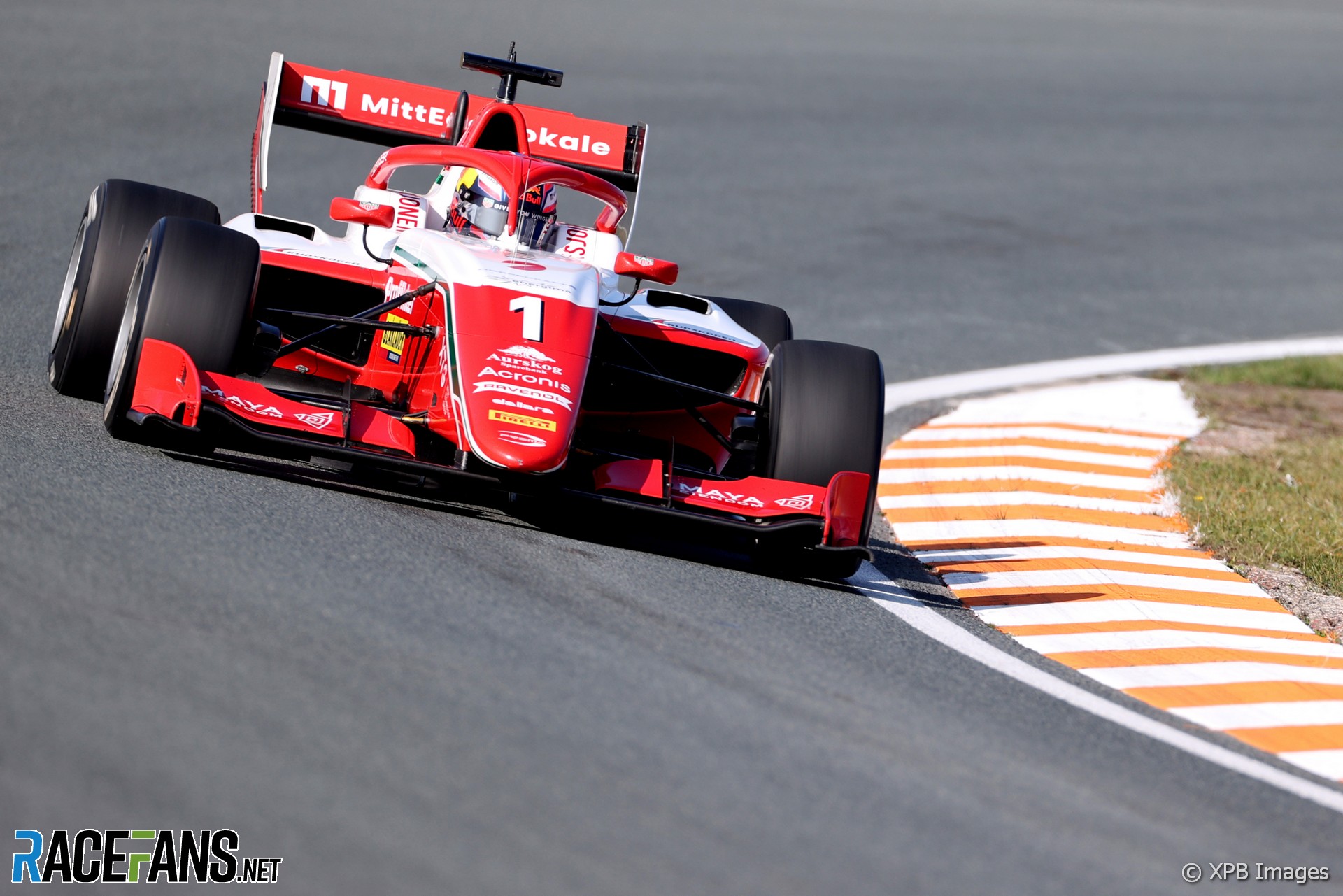 Dennis Hauger has one hand on the Formula 3 championship trophy after leading every lap from pole position in race three at Zandvoort.

The Prema driver extended his championship advantage to 43 points over Jack Doohan after pulling clear of Trident driver David Schumacher over the course of the 24-lap race.

Schumacher was forced out of the race after being hit by Victor Martins in the closing stages. Another Trident pilot, Clement Novalak, inherited second place, with Alexander Smolyar taking third for ART.

When the lights went out, Hauger held off Schumacher to take the lead of the race, ahead of Martins. Doohan started fourth but was hit at the banked turn four by Jak Crawford, allowing Novalak and Smolyar to pass both.

Pre-race points leader Hauger was unable to drop the pursuing pack behind him in the early phase of the race. But second-placed Schumacher was under the most pressure from Martins behind, with the MP Motorsport driver using DRS to mount a challenge on the Trident ahead.

Schumacher successfully fended off Martins’ advances, allowing fourth-placed Novalak an opportunity to start putting Martins under pressure instead. Back in the pack, Caio Collet relieved Crawford of seventh place.

With Schumacher occupied with defending from Martins, Hauger began to pull away at the front, stretching his advantage to over four seconds. Juan Manuel Correa received a 10-second time penalty for forcing Matteo Nannini off the circuit at Tarzan, after locking up heavily while trying to dive past the HWA driver.

With only a handful of laps remaining, Martins in third was becoming increasingly anxious to pass Schumacher for second. Heading into the banked Hugenholtz corner with three laps left, Martins tried an ambitious lunge up the inside, but clipped the rear of Schumacher’s car, sending him into the barriers and out of the race.

As a furious Schumacher climbed out of the car, the Virtual Safety Car was deployed, neutralising the race. Martins was immediately handed a 10-second time penalty for being clearly responsible for the collision.

Schumacher’s stricken car was recovered on the final lap and the race was resumed as the leader rounded turn 10. Hauger took the chequered flag to score his fourth victory of the season and extend his championship lead to 43 points heading into the final round in Russia.

Novalak finished five seconds behind in second place, with Smolyar took third place after Martins’ time penalty dropped him down to tenth. Doohan was fourth ahead of Collet, Logan Sargeant, and Crawford. Martins came in behind Frederick Vesti and Arthur Leclerc.