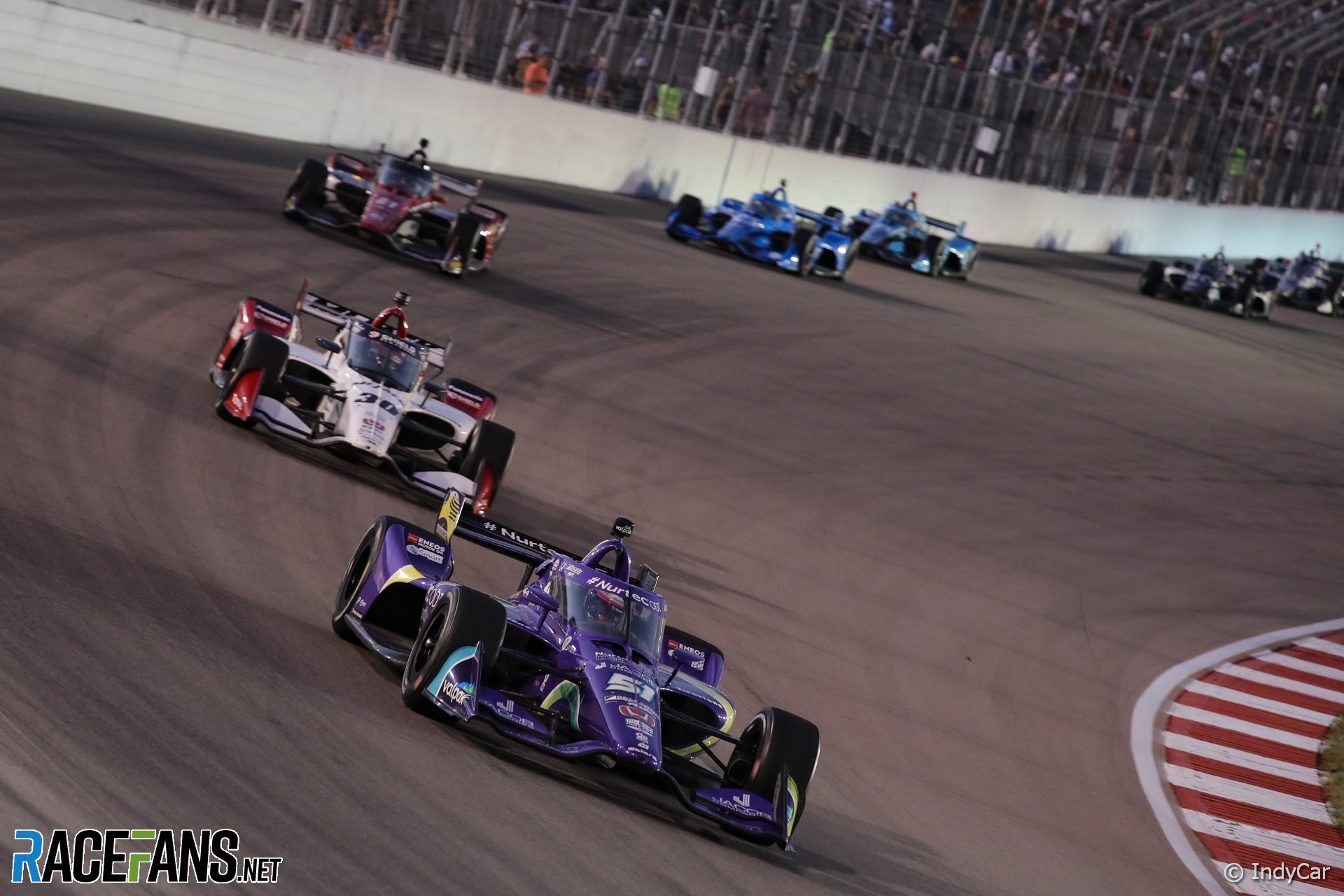 The last round of the IndyCar series witnessed the most hotly-anticipated debut for a recent Formula 1 driver on an oval since Fernando Alonso first tackled the Indianapolis 500 debut four years ago.

Romain Grosjean acquitted himself well on his initiation at Gateway Motorsports Park, the two-kilometre / one-and-a-quarter-mile speedway in the suburbs of St Louis, Missouri.

This was something Grosjean had been looking forward to ever since he first considered IndyCar as an option for his post-Formula 1 career. Before he’d seen the 2021 schedule, the then-Haas F1 driver assumed there were more than four oval races planned. However his willingness to experiment with a different and potentially more dangerous form of racing was understandably tempered by his horror crash in the Bahrain Grand Prix.

After securing a deal to join Dale Coyne and Rick Ware in February, Grosjean initially planned to run only the road and street courses, but reserved the possibility of running at Gateway towards the end of the season. After the approval of his family, and a successful open test in July, he officially added last weekend’s Gateway 500 to his 2021 slate.

All that was left to wonder now was, how would Grosjean fare in his first race in a new discipline of racing? Would he emulate the roaring success of Nigel Mansell, who only lost out on a chance to win every short oval race on the 1993 calendar due to a broken neck sustained in a crash at Phoenix? Or would he run in the back half of the field, hoping to avoid the same fate as Alex Zanardi and Takuma Sato who each crashed in their oval debuts?

On paper, his results seemed nothing to shout about: He qualified 14th out of 24 cars and finished in the same position, one lap behind winner Josef Newgarden. Yet there were still flashes of brilliance which suggested that a top 10 finish at minimum was possible.

Take for instance, his blistering charge through the field after a lap 77 restart. It had been hard for Grosjean to settle into a steady rhythm up to that point, after four cautions for accidents meant 40 of the first 75 laps were run under yellow.

“We just need to keep digging, as they say on the oval,” said Grosjean’s race engineer, Olivier Boisson, to his driver on the radio just before the race restarted – with Grosjean back where he started the race, in 14th, and on a fresh set of tyres.

To get into the top 10, Grosjean first had to see off the challenge of a past series champion and Indy 500 winner in Tony Kanaan. It took a few laps, but Grosjean was able to power past on lap 84.

A lap later, Grosjean and Dalton Kellett brushed wheels as they dove into turn three together. This could have been the end of both drivers’ races in an instant. Instead, Grosjean just drove past Kellett into 12th place. Any lingering trepidations about battling hard for position following his Bahrain Grand Prix crash were clearly a thing of the past.

Within another three laps he was past Conor Daly, one of the series’ most underrated oval runners. In another two laps, he had broken into the top ten by overtaking Jack Harvey. And then one lap after passing Harvey, Grosjean got past fellow rookie Scott McLaughlin, whose best finish of the season thus far was on the 1.5 mile bullring at Texas Motor Speedway.

Grosjean settled into a prolonged battle with former Indy 500 winner and series champion Ryan Hunter-Reay, the man Grosjean is tipped to replace at Andretti next season according to many in the paddock. This time, Hunter-Reay was able to keep his most likely successor at bay until he came to the pits for routine service.

Things could have ended in disaster for Grosjean on lap 173 of 260, when his purple number 51 machine washed out of the preferred line through turns one and two, into the marbles and millimetres away from the SAFER barrier. Daly, Harvey, and Simon Pagenaud were all able to pass him with ease.

On lap 183, Grosjean made his final scheduled pit stop, which dropped him off of the lead lap. He remained a lap down for the remainder of the race, thanks to a caution on lap 201 for Alexander Rossi turn two accident.

So what did the man himself think of finishing his first oval race? “It was a very, very good experience,” recalls Grosjean. “We tried a strategy that didn’t quite go our way, so the end result isn’t as good as our race, but we had a fast car, we learned a lot.”

“I made a couple of mistakes on cold tyres and got into the marbles, but I was able to save it and I managed to make some good passes. I’m happy with this first oval race.”

This was a tough race which saw more than one-third of the field retiring due to crashes or mechanical failures. Grosjean’s result ensured he kept in touch with McLaughlin, who came in fourth, for the coveted Rookie of the Year honours. The pair are separated by 23 points with up to 156 points available over the concluding trio of races.

That it’s this close between McLaughlin and Grosjean with three races to go is something of a surprise. Grosjean skipped the previous three oval races, including the Indianapolis 500, the only double points race on the schedule. The Indy 500 was a missed opportunity for McLaughlin to potentially put the season-long Rookie of the Year battle out of reach, regardless of whether Grosjean ran Gateway or not.

McLaughlin, still acclimatising to the enormous change from Australian Supercars to single-seaters, is yet to record a top-five finish on a road course. Grosjean therefore looks well-placed to pressure his Penske rival in the standings over the remaining rounds.

The championship will be decided over a trio of races in quick succession starting this weekend on the Portland road course. The series will then move to another road course, Laguna Seca, which Grosjean has already tested at, and conclude on the streets of Long Beach.