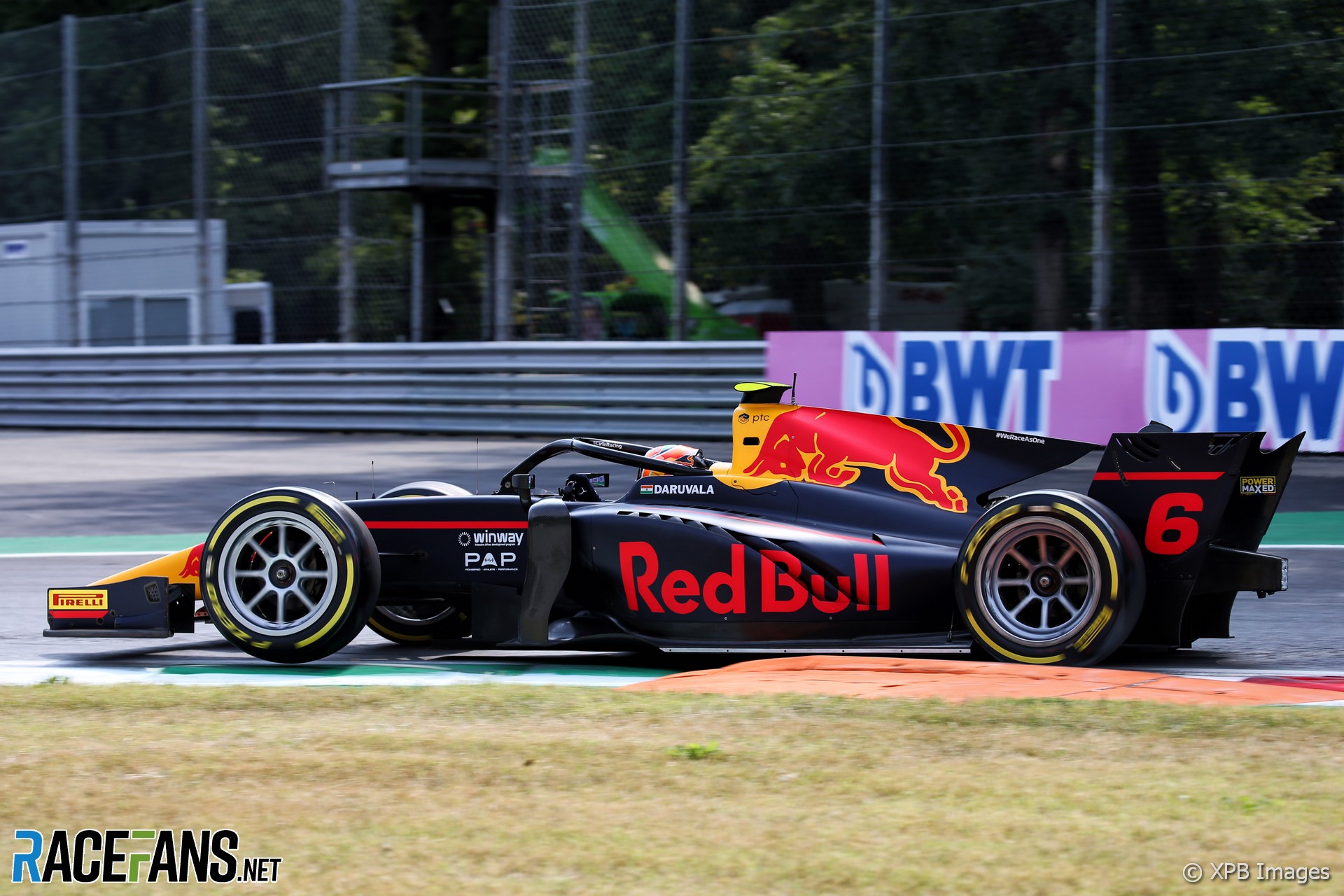 Jehan Daruvala scored his second Formula 2 win, leading every lap in the afternoon sprint race at Monza while cars clashed behind him.

David Beckmann started on pole for the second time today, after having been at the front for the morning’s sprint race as well. As with the earlier race, he was mugged by the second-placed driver into turn one, Daruvala taking the lead and heading down the track from the main pack.

Fourth-placed Bent Viscaal beat Jüri Vips into third place at the first corner. There was a brief yellow flag period after Christian Lundgaard, who had started eighth, spun on track. He was able to continue but from the very back of the race.

This morning’s winner, Théo Pourchaire, had started 10th due to the partially-reversed grid and once again moved himself up the order rapidly. He had moved up to seventh by the second lap, passing Oscar Piastri and Guanyu Zhou, the drivers who had shared the podium with him earlier.

On lap three the race was neutralised with a Virtual Safety Car as Jake Hughes’ HWA car was tagged by team mate Alessio Deledda, ending Hughes’ race and leaving his car stranded by the side of the track. It was relatively quickly retrieved but there was enough time during the virtual safety car running for Guilherme Samaia to also pull his car to a stop by the side of the track and retire from the race.

Daruvala kept the lead from the restart on lap five, immediately making distance between himself and Beckmann. Pourchaire was briefly under pressure from Piastri, on his journey up the order but their battle was relatively short.

By lap 13 Beckmann and Viscaal were fighting, allowing Daruvala to extend his lead ahead of them. Beckmann hung on to second place but the battle delayed the two of them enough to bring Robert Shwartzman in range behind them.

Piastri was able to finally pass Pourchaire on lap 14, prompting a major lock-up for Pourchaire which also allowed Zhou through for eighth place. From then on, Pourchaire seemed to be struggling for any grip at all on raggedy and flat-spotted tyres, slipping further down the order during the remaining laps.

Beckmann and Viscaal’s fight for second ended up with Beckmann running wide and rejoining ahead of Viscaal, prompting him to need to give back the place. Beckmann’s error put him in reach of Shwartzman, who cleanly took the final podium place on the penultimate lap.

Daruvala crossed the line with a more than five second lead, Viscaal and Shwartzman following him in second and third. Piastri, who will start tomorrow’s feature race from pole position, therefore narrowly increased his championship lead over Zhou, the pair following Lawson, Beckmann and Vips home.