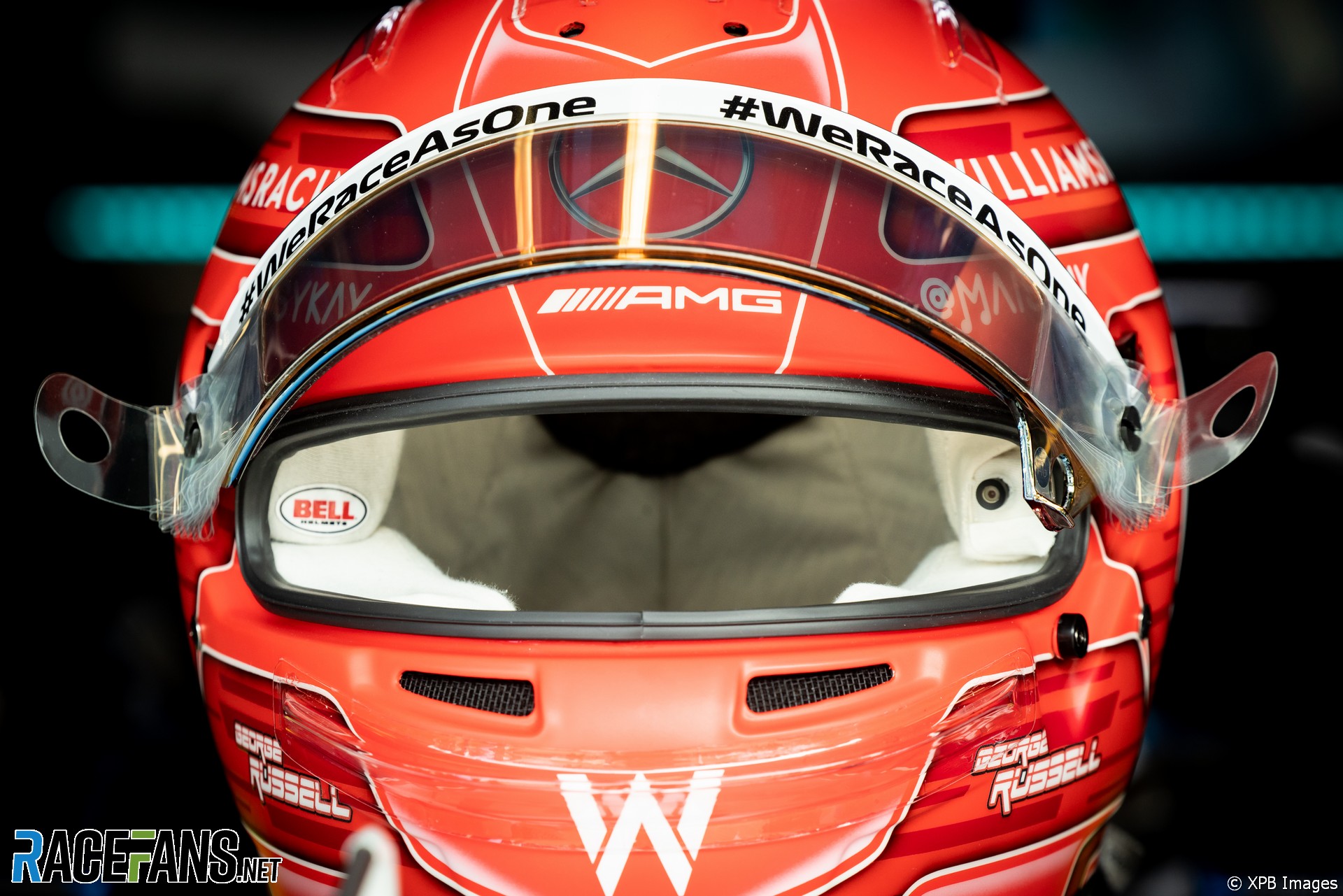 Williams admit they have concerns over revealing sensitive information through the helmet camera George Russell is running in his car this weekend.

However the team is expected to use it again in today’s Italian Grand Prix at Formula 1’s request.

The helmet camera footage has proved highly popular as it gives a more accurate impression of the forces F1 drivers experience in at the wheel. However it also gives Williams’ competitors the opportunity to glean valuable information from their dash display.

“It’s not ideal, really, I suppose, from our point of view,” said the team’s head of vehicle performance Dave Roberts.

“But then again, if people find it interesting and entertaining, then that’s all part of the sport, isn’t it? It’s probably not where I’d choose to put a camera for us but if people like that view that’s okay, I think.”

Fernando Alonso ran the same camera at the Dutch Grand Prix last weekend. However the Alpine driver only used it during practice, not in any competitive sessions. Williams considered doing the same, but eventually accepted F1’s request to use it in a race.

“We did discuss it a couple of days ago, whether we just run it for the two free practice sessions and then take it off,” said Robson “Obviously Formula 1 were keen to run it through the competitive sessions.”

The Driver’s Eye helmet and camera is produced by the Racing Force Group and has already been extensively used in Formula E since the beginning of 2020. However, in FE, the lower portion of the image produced by the camera is pixellated in an effort to disguise what is shown on drivers’ screens.

It was developed jointly by audio and video technology developer Zeronoise and helmet manufacturer Bell, both of which are Racing Force Group brands. The camera, positioned at eye-level on the left-hand side of the helmet, weighs just 2.5 grams.

“The installation of it is absolutely fine and it doesn’t cause us any problems or disadvantages,” said Robson. “It’s purely down to what’s visible on the dash.

“But I think for where we are and for the good of the sport, we are quite happy to run it. There’s nothing in particular to hide on the dash. So I think we will see it on Sunday again, I think.”

Williams is unique among teams in that its dash is mounted to the cockpit, rather than the steering wheel. It is therefore obscured from view when its drivers are cornering. Robson said the team previously considered repositioning it and “decided it wasn’t really worth the effort and it was absolutely fine where it is, stationary.

“I don’t know how much they look at it when the wheel’s actually turned anyway, to be honest – you’d like to think they have better things to do at that point in the corner. So it’s something we’ll continuously review as and when we redesign the steering wheel. But we’re pretty comfortable with it where it is at the moment.”