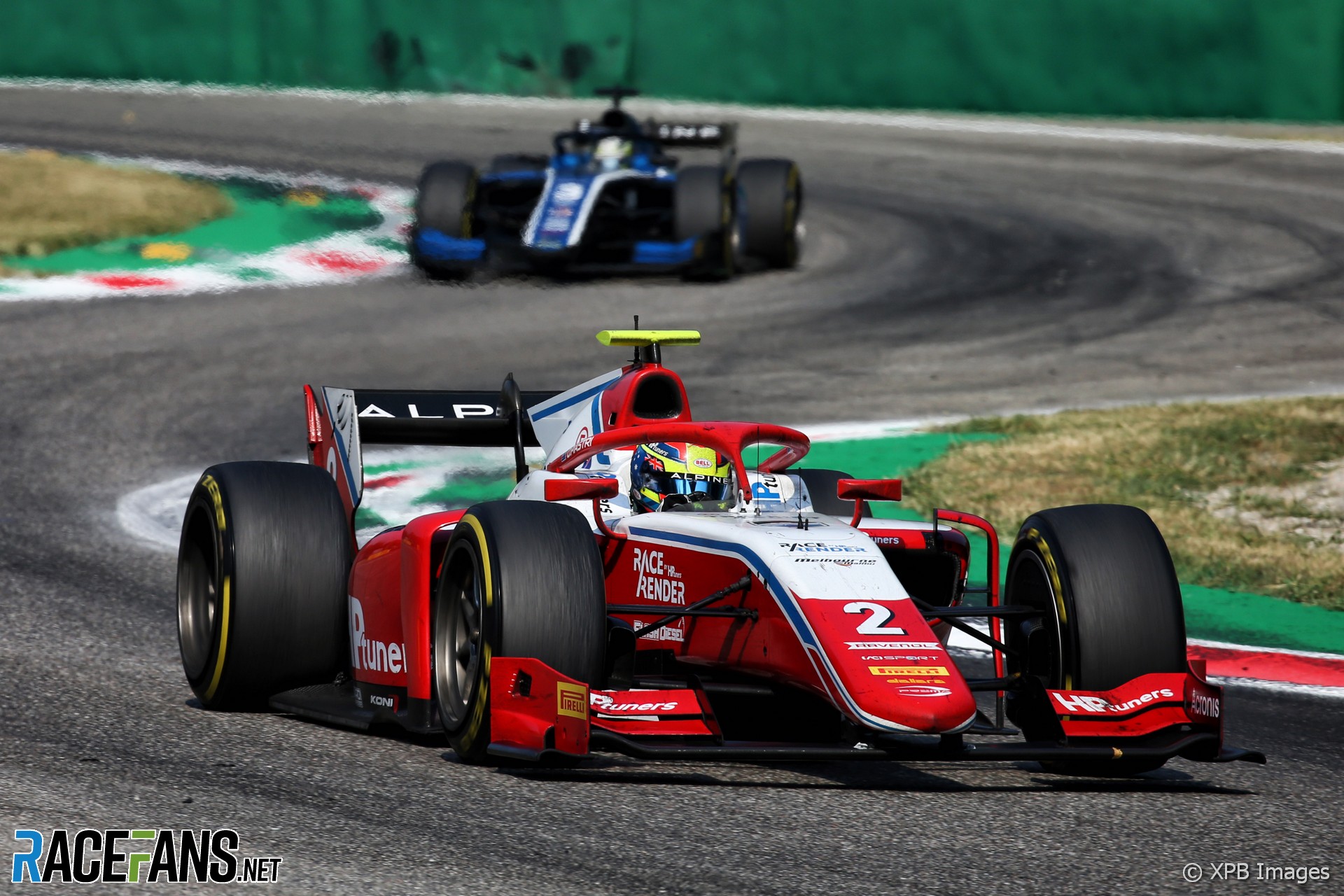 Oscar Piastri took his first Formula 2 feature race victory at Monza, overcoming a series of challenges over a dramatic race.

He extended his lead in the championship, keeping closest rival and fellow Alpine junior driver Guanyu Zhou at arm’s length.

Piastri had taken his second pole in a row this season, having also been fastest in qualifying eight weeks ago at Silverstone. Second sprint race winner Jehan Daruvala lined up alongside him, Zhou and Liam Lawson on the second row.

The track was somewhat cooler than yesterday’s second race, at 29C for the race start. Most drivers at the sharp end had chosen to start with soft tyres, in order to get early traction advantage. The first driver starting on medium tyres eighth-placed Dan Ticktum, attempting to salvage a fairly torrid weekend and hoping to avenge last year’s lost win.

Zhou passed Daruvala for second virtually off the line, the odd-numbered side of the grid getting away more cleanly than yesterday. Piastri held lead and was able to quickly draw a short gap to Zhou, while Lawson and Daruvala scrapped for third behind them.

Guilherme Samaia caused the first of four Safety Car interruptions when he spun at the second Lesmo, his car ending up stranded across the track. A yellow flag was thrown in sector two but Samaia was unable to get the car restarted and cars had to inch past his stranded Charouz under a Virtual Safety Car, being forced to run their left tyres into dirt to find space.

A full Safety Car was called while Samaia’s car was lifted off the track and racing recommenced on lap five. Piastri managed to hold the lead on a very tight restart but behind him cars were swapping places rapidly; Felipe Drugovich took fourth from Daruvala through turn one, Daruvala managing to get him back through Curva Grande. Meanwhile Liam Lawson performed a superb pass on Zhou on the outside of the Variante della Roggia for second.

Ticktum and Jüri Vips tangled at the same point on the track shortly afterwards after Vips slowed a problem that saw him stop at the side of the track. Ticktum, who took damage to the nose of his car, reported the contact to his pit wall.

The Safety Car which followed promoted Ticktum to the lead as the soft-tyre starters grabbed the opportunity to make their mandatory tyre changes. Lawson was out of luck, suffering a slow stop, which brought Zhou back onto the tail of Piastri.

However the championship contenders were now behind a queue of drivers who were yet to stop, led by Ticktum with Alessio Deledda their first target. Marino Sato’s car was removed from the queue when it came to a halt at the first chicane, before the Safety Car returned to the pits.

Piastri began making his way back to the front, picking off Deledda with ease and overtaking Armstrong for third on lap 13, leaving Lundgaard and Ticktum ahead. Deledda continued to drop backwards. He clashed with Enzo Fittipaldi, fighting for eighth through the Rettiflio, and the HWA driver slowed suddenly, falling to the back.

Lawson’s unlucky day ended when his car ground to a halt on the pit straight at the start of lap 22 – the third apparent technical failure of the day and the second for Hitech. His fire extinguisher had gone off, prompting a Safety Car while his car was retrieved.

Ticktum took the opportunity to pit, coming out 11th but with fresh soft tyres compared to the ageing medium rubber of the cars ahead. Piastri regained his lead but nearly threw it away at the restart, locking up severely into turn one. Zhou was able to to draw alongside Piastri through the Curva Grande but Piastri kept him at bay as they braked for the Roggia.

Ticktum’s attempt to charge up the order was compromised by slight contact with Ralph Boschung that saw him slide across the second chicane, off-track on both sides. He still made it up to sixth by the following lap, easily passing Roy Nissany down the pit straight. Carlin team mate Daruvala offered virtually no resistance as Ticktum moved up to fourth and began to hunt down the top three.

Pourchaire was next to be passed by Ticktum, who was then announced to be under investigation for not following race director’s instructions about rejoining. Roy Nissany earned a five-second penalty for the same infringement the previous day but Ticktum was cleared, likely due to the contact with Boschung.

However hopes for a chase to the finish ended when Bent Viscaal and David Beckmann collided at the first chicane on the penultimate lap. The Safety Car therefore returned, ending Ticktum’s challenge for victory.

The race ended with the Safety Car leading the drivers around. Piastri crossed the line first, Zhou behind him and Ticktum in third. Pourchaire collected fourth ahead of Daruvala.

Following the long gap between the previous two rounds, Formula 2 will next race at Sochi during the Russian Grand Prix in two weeks’ time.