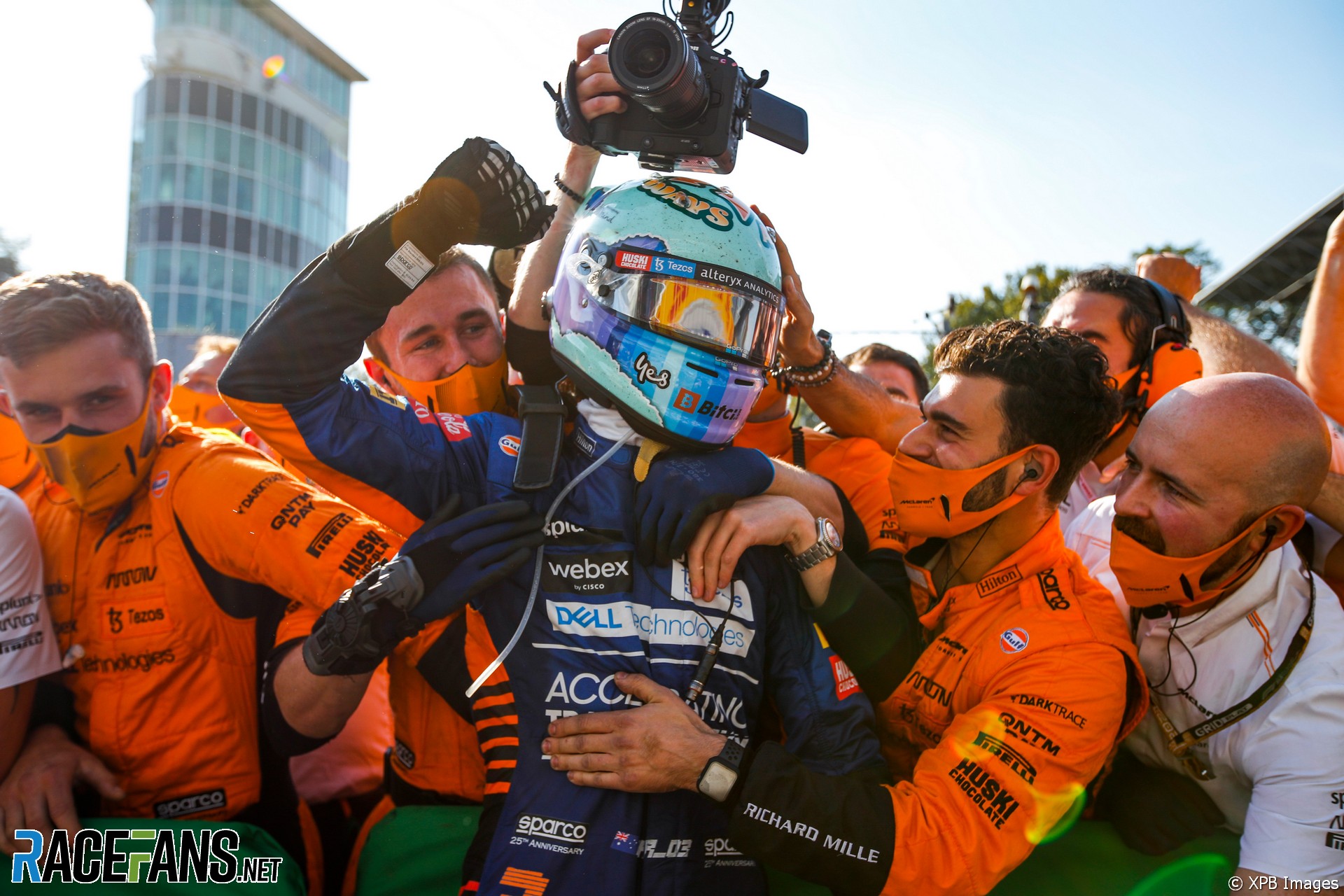 After a difficult start to his time at McLaren, Daniel Ricciardo said the summer break helped him reset from “lows” to win.

Ricciardo said that taking victory at Monza “means everything”. He arrived at the team after leaving Red Bull at the end of 2018 and spending a two-year spell at Renault.

“I definitely try not to dictate my life happiness around the sport, because it’s been three and a half years since I won, so I’d be pretty miserable most of the time if I just based on my happiness on winning races,” he explained. “But I think through it all, a lot’s happened since Monaco 2018.”

His decision to walk out of a race-winning car was widely questioned, as was the speed with which he subsequently moved on from Renault. After arriving at McLaren, Ricciardo was initially unable to match team mate Lando Norris. He was clearly frustrated by his own performances prior to the summer break and struggled to articulate his relative lack of pace.

Basking in the glow of victory on Sunday evening, Ricciardo said: “I think that’s why we love the sport – it makes all those crappy days worth it. It’s simple as that.

“There’s a high that you get from this moment right now that I’ll probably watch this interview in a few days time and I’ll be like, ‘oh, I actually said that?’. I’m still kind of floating right now, to be honest. And that’s what it does. So that’s what draws you back in.”

Echoing his words from the eve of the race, Ricciardo said resetting over the summer break was key to his Monza performance. “It’s just wild. There’s been lows this year but, deep down, I never lost faith or the belief.

“I think I just also needed to step back. And I think that’s where having some time off in August helped. I actually think that helped this weekend get to this position.”

Winning for McLaren gives Ricciardo an opportunity to feel closer to two of his motorsport heroes. One is seven-times NASCAR champion Dale Earnhardt.

McLaren Racing CEO Zak Brown promised Ricciardo a test drive in the NASCAR legend’s 1984 Chevrolet Monte Carlo by, which he owns, as a prize for his first podium finish with the team.

“It was always ‘the podium, you get to drive it’,” said Ricciardo. “We’ve never talked about a win!

“I gave him my shoe that he drank out of, so maybe he gives me the car. It’s a good trade!”

“To have a chance to get behind the wheel of one of his cars is crazy,” said Ricciardo. “That will certainly be a kind of ‘pinch me’ moment.”

Ricciardo’s triumph also comes at the team forever associated with one of the greatest names in Formula 1, Ayrton Senna.

“When I think ‘McLaren’, I think of Senna,” said Ricciardo. “That’s the early memories. I’ve seen the trophies in the cabinet at the MTC and to have a winning trophy now with my name, in pretty much the same cabinet, is crazy.

“So these are two little things today which I certainly appreciate. They’re kind of two little surreal moments that I guess have hit me.”