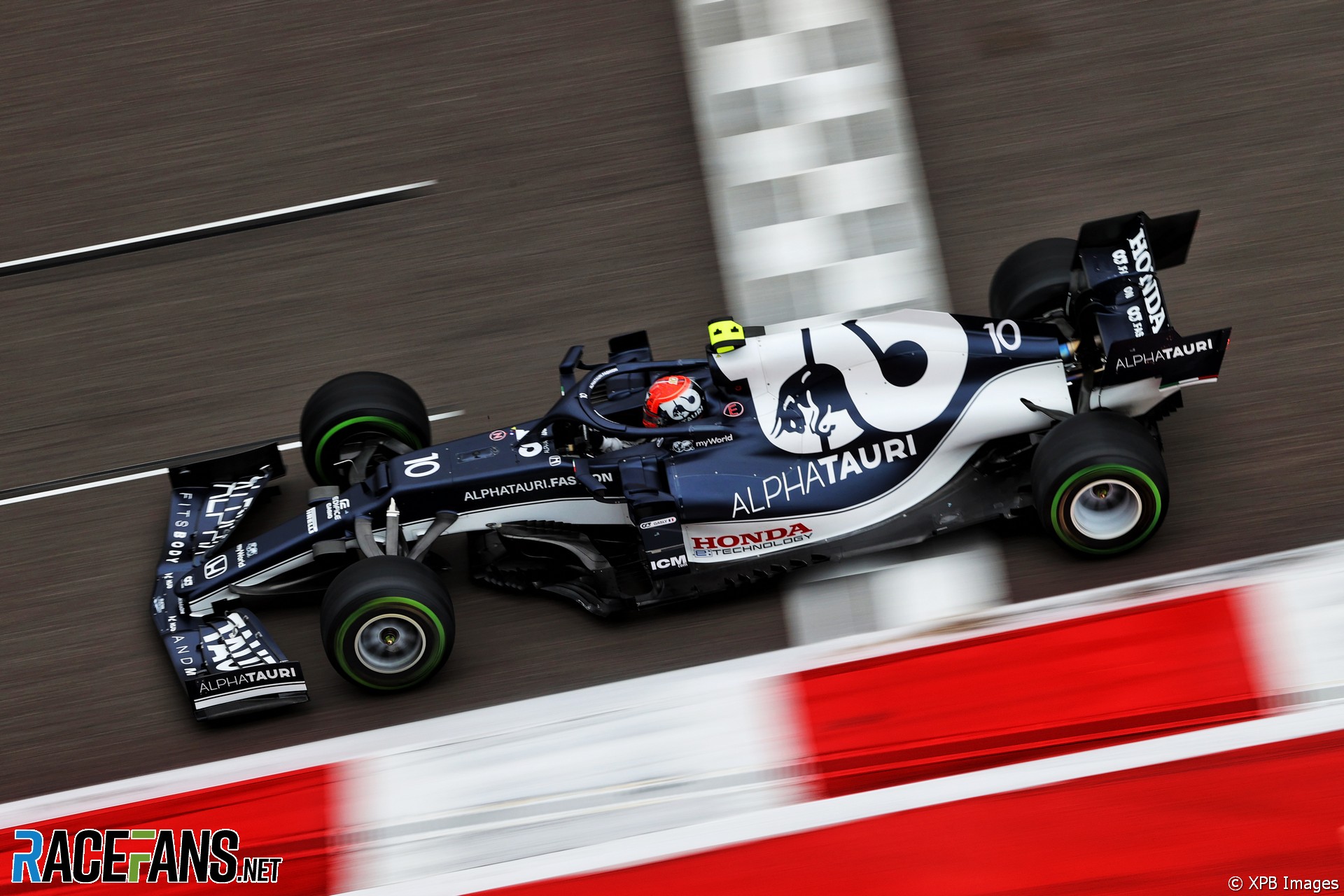 AlphaTauri believe Pierre Gasly was quick enough to qualify in the front two rows for the Russian Grand Prix, before a tactical error ended his session in Q2.

Gasly raved about his car’s handling after Q1 but dropped out in the next round after losing time behind George Russell on one lap. The AlphaTauri driver reacted angrily to his elimination, punching his Halo in fury.

“He had a car that was very, very fast,” the team’s chief race engineer Jonathan Eddolls explained. “It was at least able for, I would say, the top four today, especially in those wet conditions.”

A series of problems meant Gasly never managed to get the best out of his car in Q2, said Eddolls.

“In quali two we went out, we planned to do either one longer run like we did in quali one or to do two shorter runs with a pit stop.

“The second lap was looking fantastic and then we got traffic with Russell. He was on an in-lap in the last sector. He wasn’t super-close, but he was close enough that when we compare the data, we lost about six tenths in those last few corners with Russell. So with that lap alone, that second lap right at the start of quali two, he’d have been P7 in quali two and easily through.

“So that’s obviously super-frustrating because those laps right at the start of the session when the track was bad, if we could have set laps that the car was capable of, it was easily going through.”

Gasly still had time to do a further lap. The team decided to keep him on his existing set of tyres instead of pitting for fresh rubber.

“We then said, okay, we’ve got two choices. We either stay out and do another lap – we knew the car was fast – or we could pit for another new set. We went for a push-lap and said, if it’s coming quick, we stay out because we know we can go through, if it isn’t coming quick we can abort and do a pit stop.

“It was coming quicker up until turn 13 and again we would have gone through. But at that point the tyres were dead. He went through the last few corners, lost all of the time and crossed the line. And at that point it was too late to pit for another set.”

“As a group, we didn’t. I’m responsible for that, I’m in charge, so I take the the flak for that. Obviously we’ll review it as a team next week. There’s no point doing it today because everyone’s frustrated and we’ve got a race to worry about tomorrow, we can’t change what happened today.”

The stewards decided no investigation was necessary for the incident between Russell and Gasly. Eddolls said it appeared Russell hadn’t deliberately held Gasly up.

“It wasn’t like Russell was going slow and impeded us,” he said. “He was in front all the way through in the last sector, he was pushing for an in-lap. So when you look at the onboards it doesn’t look terrible.

“But he was close enough that in those conditions, it really was affecting Pierre. When we do the overlays to his other laps we’re talking about six tenths or so. [A penalty] wouldn’t have changed anything anyway for us.”

AlphaTauri will do a full post-mortem on the session after the race, said Eddolls. “We will sit down next week and understand what happened, take all of the learnings and try to improve for the future.

“Wet quallies are never easy. Without the Russell traffic we could be sat here having been in easily in quali three and the mood would be completely different. But we got it, you can’t change that and we didn’t react well enough from that point on. So it’s quite frustrating, particularly as we know we had a car that was so fast.

“The first run in quali one, he said he’s never felt the car feel so good on wet tyres. That’s been one of our weaknesses, maybe a bit last year and the start of the year, but we’ve done a lot of work.

“Spa showed we’ve made a step and then here again, I think we’ve got a good understanding of how to make the car work in the wet. We didn’t make the most of it and that’s what’s the kick in the balls.”