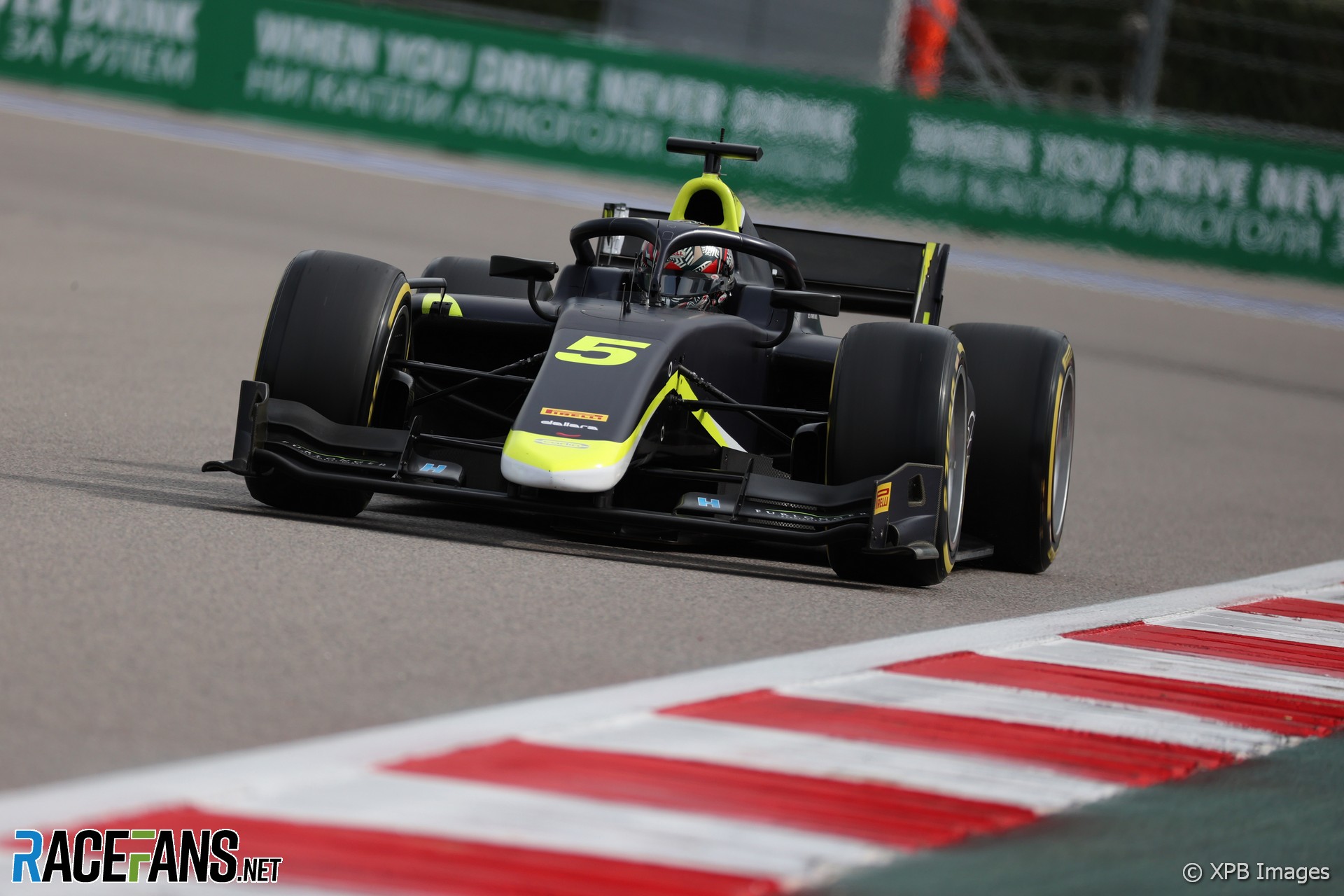 Dan Ticktum has won Formula 2’s only sprint race at Sochi, starting from pole on a drying track.

However points leader Oscar Piastri failed to capitalise on title rival Guanyu Zhou spinning out of the race before it started.

In a double blow for the Virtuosi team, Felipe Drugovich also lost control of his car on the way to the grid. He crashed heavily into a wall, ending his race before it began. With Zhou unable to return to the grid under his own power, neither Virtuosi car took the start.

That meant the start of F2’s only sprint race of the weekend was delayed. The other was cancelled as a result of the disruption caused by the rain-hi weekend.

When cars got away for the delayed formation lap, Enzo Fittipaldi’s Charouz stalled on the grid. After a single formation lap, it was announced that the Safety Car would come in and the race begin with a rolling start.

Ticktum therefore led the field away, Vips sticking with him but unable to find a dry line to pass. With a single, visible, dry line and still-cold slick tyres the field sat tight for the first laps to avoid risking a crash.

On lap five, Bent Viscaal went off the track and into the barrier between turns 15 and 16, bringing out a yellow flag in sector two. A Virtual Safety Car was called when it became clear his car would need retrieval, the marshals working quickly to remove it from the track.

The VSC ended on lap six, Ticktum keeping the lead from Vips on the restart. Lawson, running in third, retired from the race with bent suspension after a brake failure sent him into the barriers, making heavy rear-left contact into the chicane and prompting another Virtual Safety Car period.

On the restart on lap nine, Daruvala went three-wide into turn one, taking advantage of a bad start by Boschung and passing both him and Pourchaire for fifth place.

By lap 10, rain was beginning to close in on the circuit, the small dry window that had allowed F1’s qualifying session closing.

“So it’s going to rain?” Ticktum asked the Carlin pit wall on lap 13 but was told that they should make the chequered flag before any downpour.

Daruvala fell down the order on lap 16, after losing grip through turn 15 and spinning into the run-off. He was able to continue but went from fifth to 12th.

That left Ticktum to run out an unchallenged winner, coming across the line with a clear lead. Vips followed him over the line in second while Shwartzman taking a home podium in third.

Piastri’s effort to add to his points tally while Zhou watched on was compromised by a poor restart after the first VSC period, which cost him positions. He came in ninth, closing on Verschoor over the final laps, but unable to challenge.