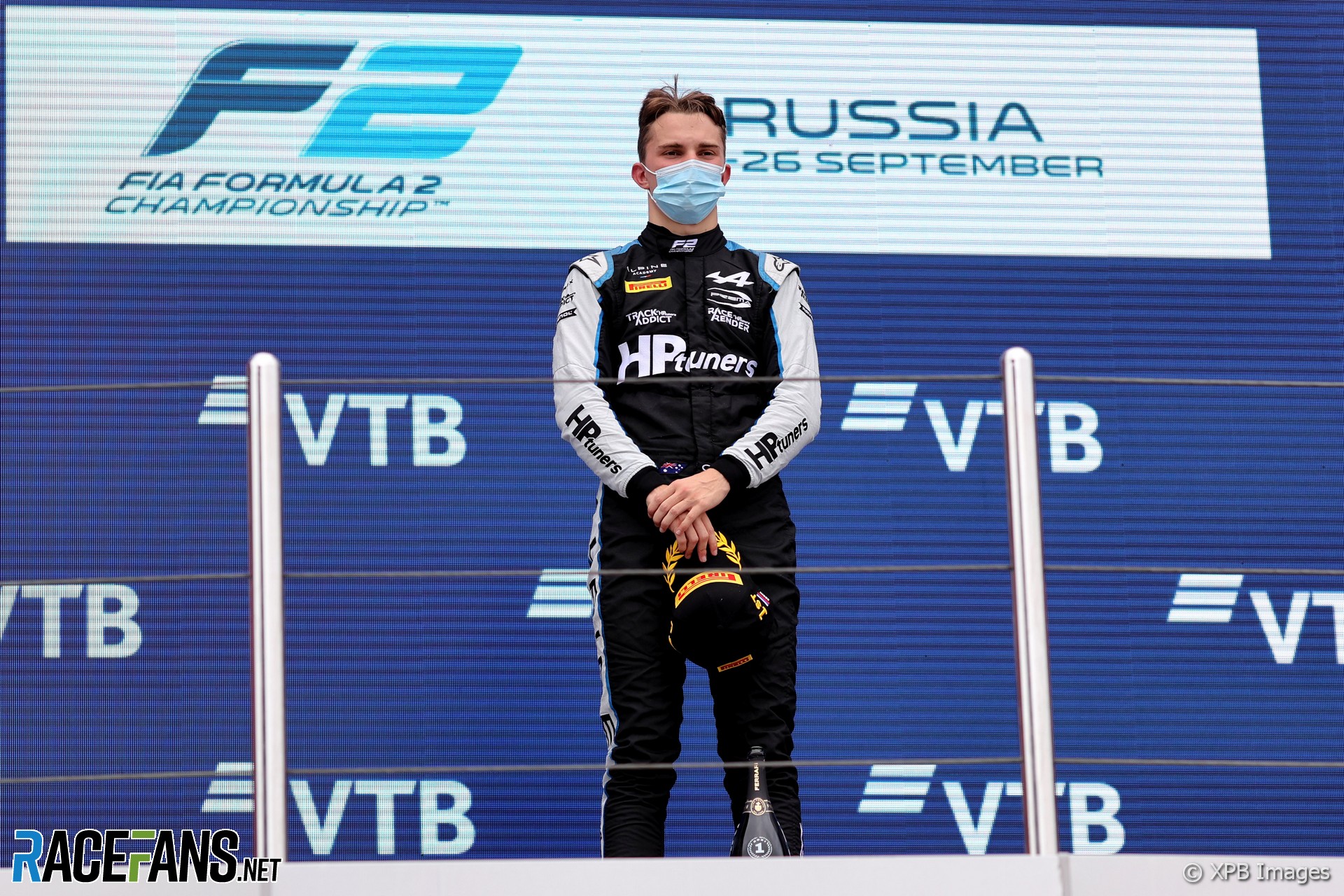 Oscar Piastri has taken the Formula 2 feature race win in Sochi, reinforcing his grip on the title with two rounds to go.

The Prema driver took pole during Friday’s qualifying session, Jehan Daruvala next to him on the front row with Théo Pourchaire and Guanyu Zhou behind them.

Piastri got away easily, while Pourchaire, Ralph Boschung – coming from fifth – and Daruvala took the first turn side-by-side, jousting for second. Zhou lost out in a big way, falling to eighth in the pack.

Pourchaire won the scrap for second and the order settled in behind him and race leader Piastri. Daruvala, Boschung and Shwartzman followed while Piastri drew out a more than two-second lead.

Bent Viscaal spun at turn two on lap one, after contact with Roy Nissany and was out of the race, while Lirim Zendeli pitted for a new front wing. There was a brief virtual safety car period while Viscaal’s car was retrieved before racing resumed on lap two. Nissany was issued a five-second time penalty for the contact with Viscaal.

Six laps in Jüri Vips began to slow and headed into retirement. He was passed by multiple cars and was almost by Guilherme Samaia in an unnecessarily close move.

Zhou was able to recover to fifth by lap seventh, passing Jake Hughes, but was more than 13 seconds away from leader and title rival Piastri.

Liam Lawson and Richard Verschoor battled through lap eight as their tyres began to fade, Lawson able to hang on round the outside of turn four to make the pass stick.

Piastri pitted from the lead on lap nine, Pourchaire staying out one lap longer in an attempt to claim the lead. It proved ineffective, Piastri using the benefit of his warmer tyres to immediately pass the ART driver as he rejoined.

When cars that had started on medium tyres started pitting, Piastri, Pourchaire and Boschung were already well up the order, Piastri easily reassuming the lead from Samaia. Pourchaire got blocked behind Samaia as he attempted to catch up to Piastri, who was drawing out a considerable lead before Pourchaire managed the pass through turn 13 on lap 18.

On lap 21 Daruvala was able to start seriously challenging Boschung for third place, pursuing the Campos driver around the track. Boschung locked up at the start of lap 22 and was forced down to fourth, Daruvala easily passing and Robert Shwartzman taking an easy DRS pass to compact Boschung’s decline.

Pourchaire was within two and a half seconds of Piastri by lap 25, third-placed Daruvala more than eleven seconds behind them. Boschung suffered a puncture on lap 26, pulling over at a marshal post which avoided the need for a Safety Car.

Piastro took the line with a 1.8 second lead, despite Pourchaire’s best attempts to close the gap and with Daruvala more than 12 seconds away.

Although Lawson claimed the fastest lap bonus, Piastri extended his championship bid on 178 points to Zhou’s 142, Shwartzman staying in the frame on 135. Formula 2 next races during the Saudi Arabian Grand Prix weekend in December.