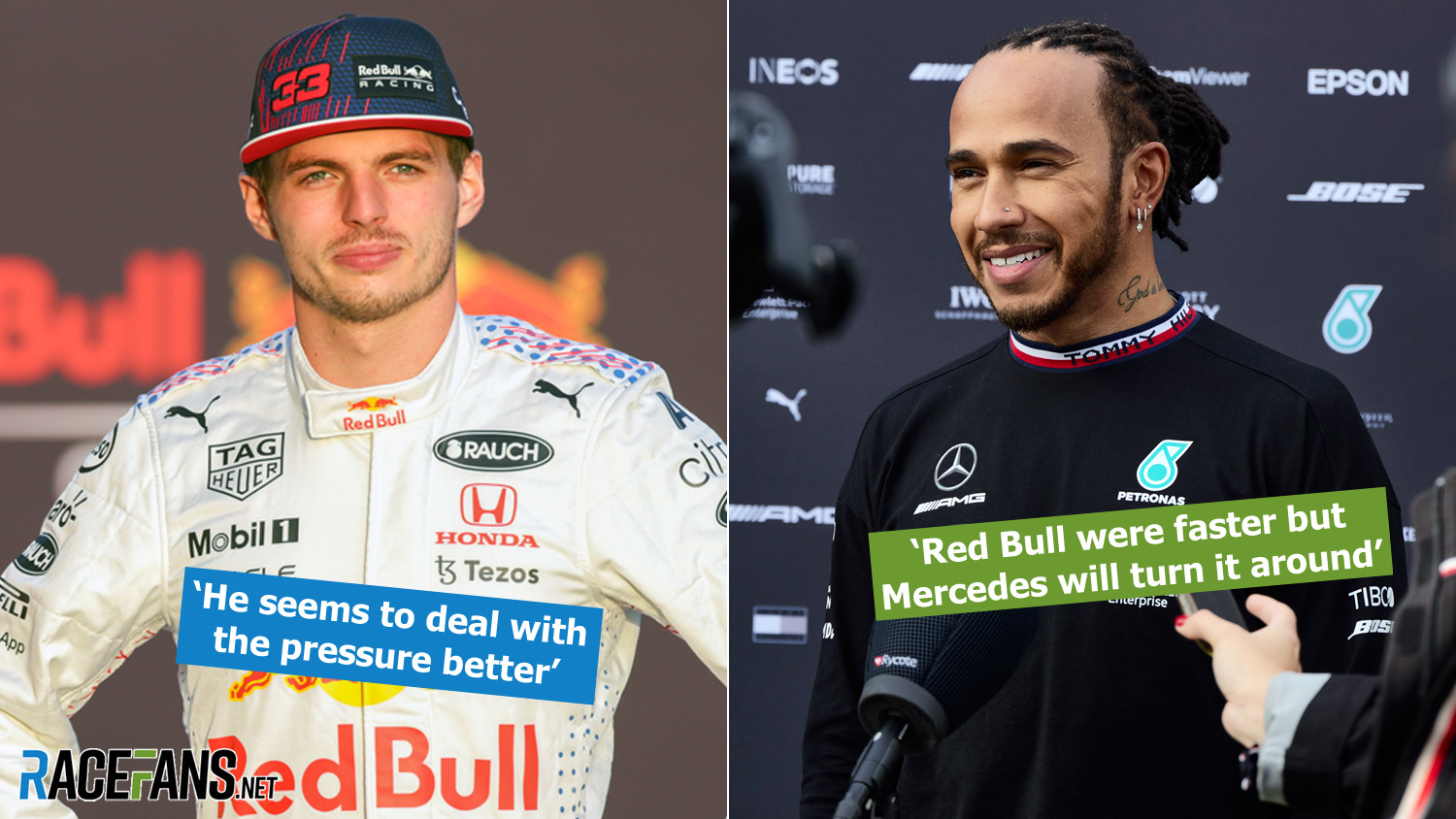 Lewis Hamilton holds the championship lead but his rival appears to be the narrow favourite to take the title among their competitors.

But with just two points separating the pair heading into this weekend’s race, the recurring theme among those asked who will win the title was how hard it is to predict the closest championship fight for years.

“It is a question that is impossible to answer,” said Charles Leclerc. “Both of them are very competitive this year and it’s Max or Lewis that is going to come out on top, obviously.

“But I don’t know, it is very close, and it’s definitely nice for the sport, for Formula 1. I wish I was up there to fight with them, but it’s not the case yet.”

But with seven wins to Hamilton’s five so far, Leclerc suspects Max Verstappen will edge it.

“But Lewis is an extremely consistent driver and he’s always there when you don’t expect him to be there. So it’s going to be a very close fight. But if I follow my feeling now it’s probably Max.”

“He seems to deal with the pressure better than other people,” said Alonso. “Every one of us is different, but it seems that for him, it’s not a big deal. Every weekend he takes race by race. So I think that’s the right approach for these remaining races.”

Since Verstappen reeled off a strong of three consecutive wins at mid-season, Mercedes have raised their game. Esteban Ocon, who is managed by Mercedes, therefore suspects Hamilton will beat his rival and claim a record-breaking eighth title.

“I go for Lewis,” said Ocon. “I agree that the Red Bull and Max there have been a bit faster, but I trust Mercedes to turn that around.”

But he expects “it’s going to be close the whole time” between the two. “I’ve seen a stat where it’s the closest probably has been for a long, long time. So this is great for for the show, great for everybody keeps the wait until the end.

“They are both great drivers and they they push the limit to to fight against each other. So it’s fun. Hopefully we can all be up there to to be fighting for the title next year with the new regulation.”

Hamilton’s future team mate George Russell believes his experience will count in the end. “Mercedes and Lewis have got the experience and have obviously been here seven times before in the last seven years and I think that’s going to play in their favour when it gets down to crunch time.

“Obviously, Red Bull and Max have been incredibly fast all year. Yeah, I think purely because of the the recent experiences probably Lewis and Mercedes.”

While Hamilton’s current team mate Valtteri Bottas observed he still has “a theoretical chance”, he added, “but after me, if I don’t win, then Lewis.”

“It’s a great fight,” said Mekies. “After 15 races or more, there are two or three points apart, so it’s great to see.

“[I’m] probably drawing Franz’s side in saying that we probably see a bit more speed in the latest races with Max. But I’m sure it’s going to be a very tough fight until the last race.”

Whichever driver comes out ahead, Formula 1 has produced its most closely-fought championship for years. Kimi Raikkonen, who won a memorable title fight in 2007, just wants to see the contest decided by whoever is quickest, rather than any technical problems.

“I hope it’s going to be decided on the track and not that one has to have mechanical issue or something that decides it,” he said. “I think it’s doing all the good for the sport to have two guys very close fighting for it.

“I can’t decide but we’ll all find out when the time comes. I would be really boring if we would know at this point.”

12 comments on “How do Hamilton and Verstappen’s rivals see their championship fight?”