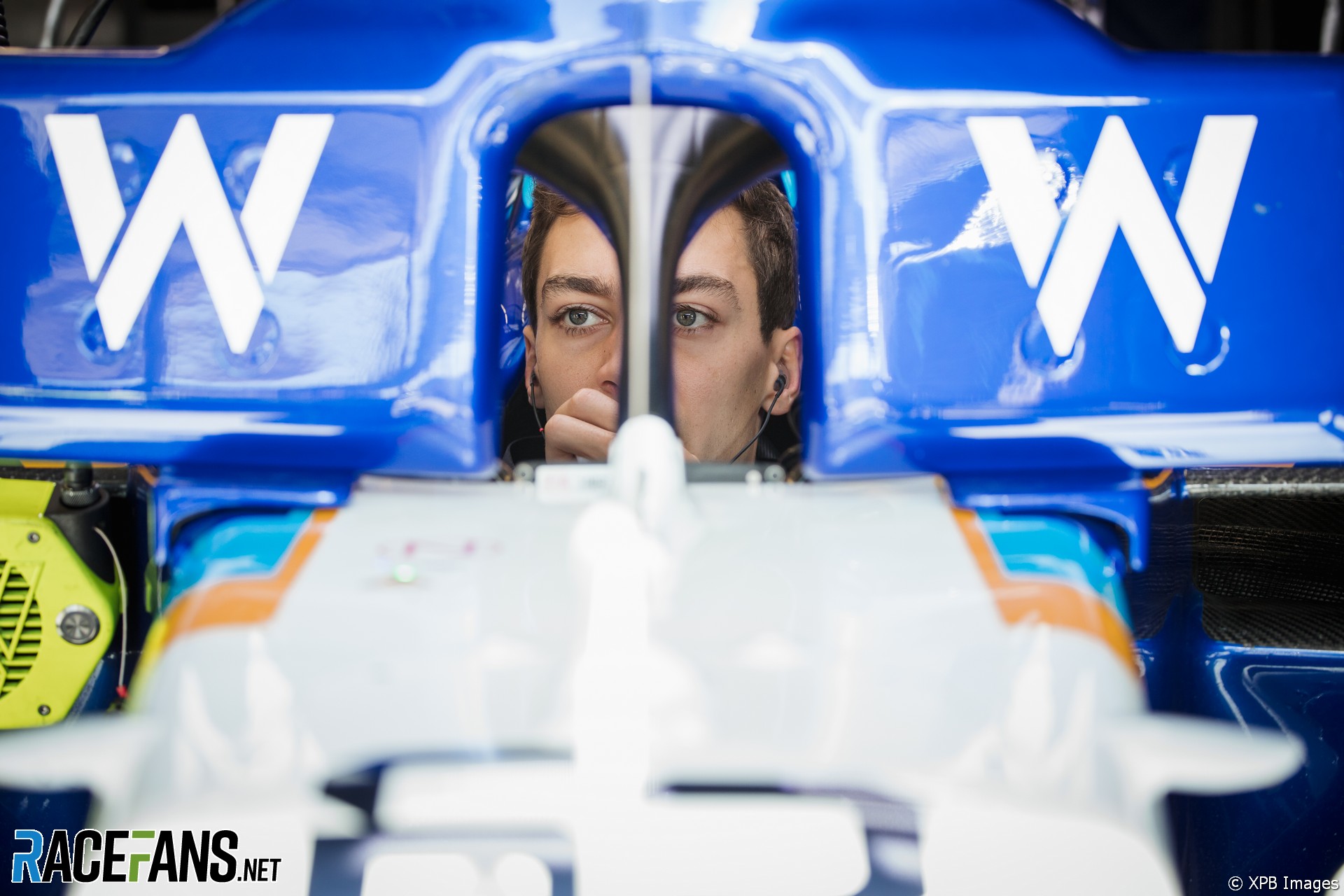 In the round-up: George Russell’s final corner error in Q2 denied him another appearance in the top 10 shoot-out, his team believe.

Williams’ head of vehicle performance, Dave Robson, said that George Russell’s final Q2 lap would have been good enough to make Q3 “by quite a large margin as it turned out” – had the driver not run wide at the damp final corner.

“That’s what happened in those conditions sometimes,” Robson explained. “But he’d have definitely made it.”

After a frustrating qualifying session for McLaren, team principal Andreas Seidl said the team’s performance seems to be worst on the sot tyres, which are unlikely to be used by many in the race.

“Hopefully, starting the race on the medium tyres we’ll be able to look a little bit better than what we could show today on the soft tyres, where we struggled already yesterday as well,” he said.

“I think Q2 actually looked a bit better for us on medium tyres, but there will be no miracles. We simply don’t have the pace for this weekend. We know the reasons why. But still, we will try with both cars tomorrow to move forward and to score points.”

The rain which fell on Saturday morning at Istanbul Park completley changed the track’s characteristics when it dried out, said Yuki Tsunoda.

Tsunoda is the only driver who reached Q3 who will have to start the race on soft tyres, having used two sets to get through to Q2. However, he believes that was the right call from the AlphaTauri team, given the changed circumstances.

“From practice pace, even if I’d fitted the medium tyre it would have been possible to go through to Q3,” he said. “But straight away from Q1 I didn’t feel the same feeling and there just wasn’t much pace in the car. So definitely a good choice that the team made for going to the soft tyre.”

Gregoire Saucy has clinched the 2021 Formula Regional European Championship title with three races to go. The regional F3-grade series was decided conclusively, Saucy on 249 points to second-placed Hadrien David’s 161, after 17 races, of which Saucy won eight.

Following the second race of the weekend at Mugello today the championship will conclude at Monza.

At the first Turkish Grand Prix I remember asking Bernie Ecclestone how long the deal was and he replied. ‘We’ll be here forever.’

So after 14 years of F1 I've decided this season will be my last. Huge decision for me to make but the time is right.

I achieved what I always wanted to as a kid so I'm happy! I can't wait for my next challenge but for now we have a season to finish and points to nab 🧡 pic.twitter.com/iz3pD3exIW

Colton Herta in an F1 Andretti is a nice thought. But if Andretti is buying a Swiss-based, Ferrari-powered F1 team, would it not make more sense to call on their recently-hired, Swiss-based veteran of 179 #F1 races, most of which were with Ferrari power? pic.twitter.com/Dg0NXQQ6b3

"North Korea, Thailand and Indonesia were declared non-compliant by the World Anti-Doping Agency (WADA) on Thursday, making them ineligible to be awarded the right to host regional, continental or world championships during the suspension."

"The victory, secured by just 0.430 seconds over team-mate Cresswell, moves Rees level on points at the championship summit with Phinsys by Argenti’s Matias Zagazeta – sixth on this occasion – with the Peruvian ahead courtesy of his four wins versus Rees’ three."

Team Hezeberg, based in The Netherlands, to enter NASCAR Cup Series with part-time schedule in 2022 (CBS)

"Team Hezeberg plans to participate in an upcoming Next Gen test at Charlotte not only with Hezemans, but another very accomplished driver from Europe: Former Formula 1 champion and 1995 Indianapolis 500 winner Jacques Villeneuve will drive the Hezeberg car on Tuesday, and the team has left open the possibility of Villeneuve driving races for the team next season"

Sometimes it’s the offhand comments that spark something; Dieter observed in his diary that there’s a risk, with 2022’s regulation change, of teams locking themselves into a disadvantage. Roger Ayles shared some extensive thoughts on whether that might be likely.

That is a concern that I have, Not just for the 1st year of the new regulations but also future seasons.

A team (be it at the front or back of the grid) getting it wrong and going into the season struggling is part of the game but the regulations and development opportunities been so restrictive then creating a situation where they essentially have to completely write that season because they aren’t able to do anything to recover is in my opinion not correct and does nothing to benefit the sport or fans.

Think of 2009 as an example. Watching teams having to develop to catch up to Brawn created some extra interest and eventually helped give us a more competitive fight for the championship. Likewise that year watching McLaren and to a lesser extent Ferrari start out so badly but recover to win a few races was again fantastic to watch and created that bit of additional interest over the season, Especially for those of us who love that technical/development aspect of the sport.

The restrictiveness of the regulations and apparently limited opportunities to develop or innovate is to me the biggest negative element going forward. Not just because I don’t think restrictive regulations are simply not F1 but also because that side of the sport, The ‘extremes’ are a huge part of the draw of it for me. It’s part of what hooked me and a part of what’s kept me hooked for as long as I have been.
@Roger-Ayles