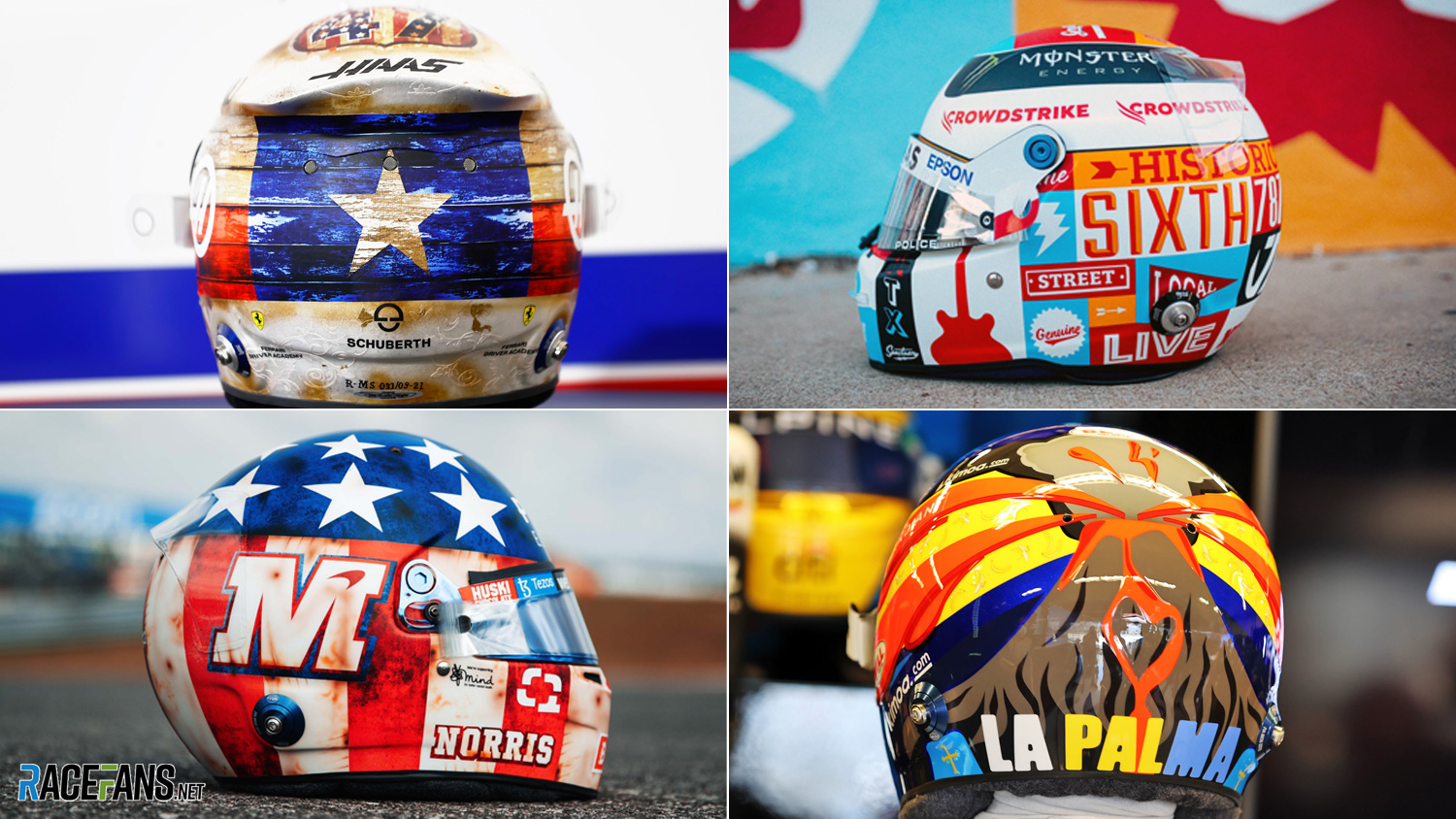 Half of the Formula 1 drivers taking part in this weekend’s United States Grand Prix have produced special helmet designs for the occasion.

The most recent F1 race winner and the most recent United States Grand Prix winner, Valtteri Bottas, is wearing a helmet designed by his partner Tiffany Cromwell in the style of local street art.

Lando Norris is wearing a design styled on the 1969 biker film Easy Rider.

Both McLaren drivers have special lids this weekend. Daniel Ricciardo will get the chance to drive the 1984 Chevrolet Monte-Carlo raced by his hero Dale Earnhardt, and has brought a modern-style replica of design worn by ‘The Intimidator’.

Fans were given the choice of three different designs for Lance Stroll to wear this weekend, and opted for a space-themed look.

Following the volcanic eruptions on the island of La Palma in the Canary Islands, Fernando Alonso has had a special design produced which will be auctioned to raise money for those affected.

“I am Spanish and the Canary Islands is part of Spain, and we have obviously a lot of love for our island there and is very well known because a lot of tourists come there,” Alonso explained when asked by Racefans. “My ex-wife was from the Canary Islands, so I have a very good connection with the Canaries, always.

“Obviously there are not a lot of news internationally, but in Spain we see every day how [the situation has] evolved [with] the volcano there and the things that is taken away from everybody: their houses, lands, their way of living, for many people. The main business there is the banana [cultivation]. So there are a lot of things that have been destroyed and it will be for many, many years destroyed.

“So I will wear the helmet this weekend. I will launch a platform where people can donate some money and the helmet will be also in an auction on November 4th to raise more money, so each of us can help.”

Ferrari driver Charles Leclerc is marking the 20th anniversary of his sponsor, watch manufacturer Richard Mille, with his helmet.

Having been unable to wear the special helmet which was designed for his home race at Suzuka because the event was cancelled, Yuki Tsunoda has brought it to this weekend’s round instead.

Both Haas drivers also have special helmets for the team’ home race and their first appearances at Circuit of the Americas. Mick Schumacher has a Texas-themed design.

Nikita Mazepin has added a rattlesnake print to his helmet, a lucky horseshoe on the reverse and cattle horns at the front. The colour has changed to a brighter orange with a white base.

George Russell has gone for a Wild West theme with sheriff badge motifs against a wooden board background making a significant change from his usual style.