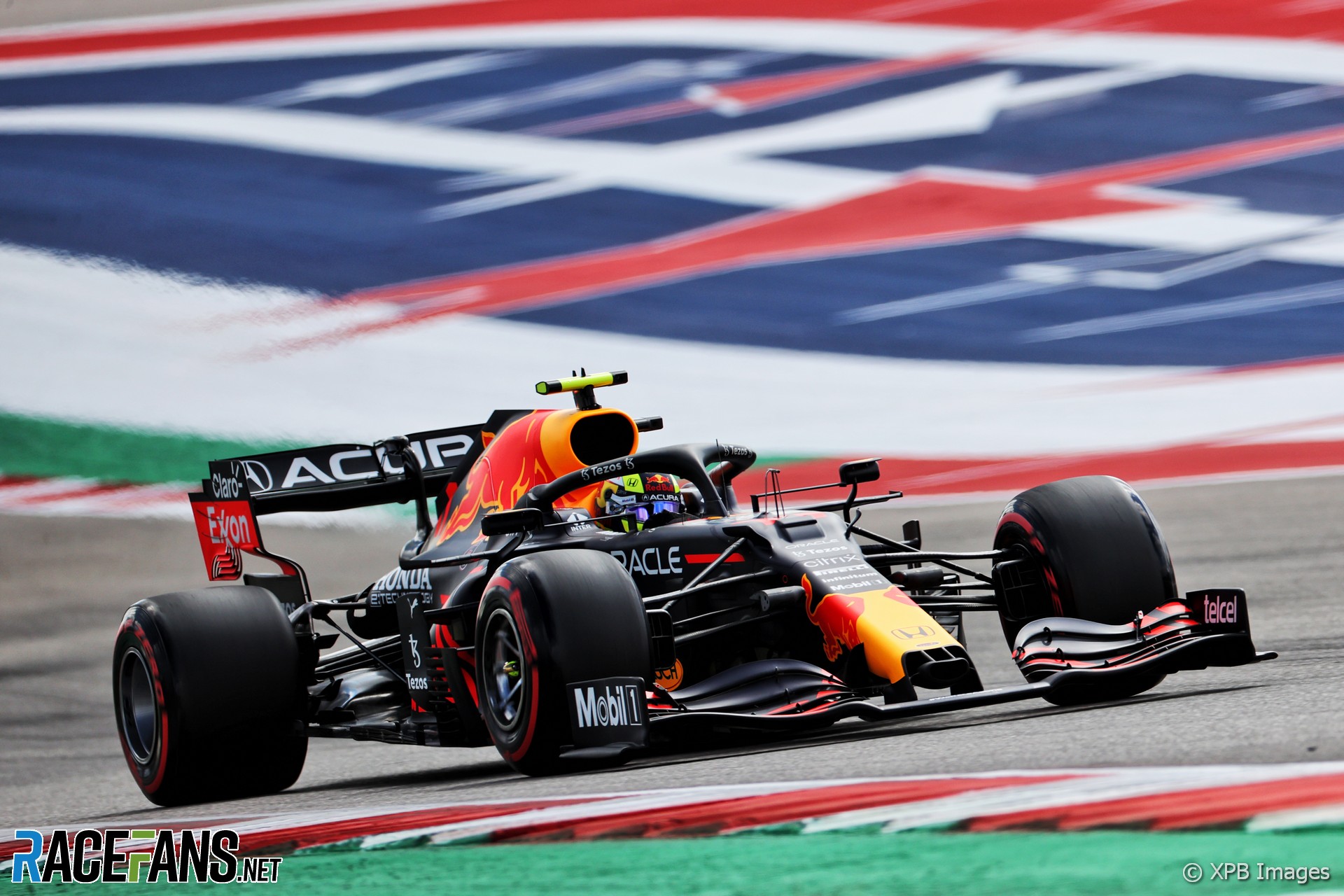 Sergio Perez remained on top in the final practice session for the United States Grand Prix, lapping the Circuit of the Americas in 1’34.701.

However Lewis Hamilton and Max Verstappen both set quicker lap times which were deleted due to track limits violations. Hamilton set a 1’34.458 and Verstappen a 1’34.383.

Verstappen was once again frustrated by traffic, coming up behind Antonio Giovinazzi on a slow lap and losing another potential lap time, after the one he had deleted for track limit violations.

As in Friday’s sessions, drivers favoured soft tyre sets, reserving medium and hard tyres for the race tomorrow. The only drivers to use the harder rubber were Sebastian Vettel and Pierre Gasly, who both initially went out on medium compound tyres. Vettel, who will start from the back of the grid due to a power unit change penalty, made an additional two runs on the yellow-walled tyres, saving his soft run for the end of the session.

Red Bull led the first half-hour of the session, Verstappen having the edge on Perez. Mercedes made a low-key start to proceedings, Valtteri Bottas staying in the garage for much of the first 40 minutes.

Both Bottas and George Russell had spins on-track, Bottas coming off the kerb at the exit of turn six and flatspotting his tyres. Russell had a more dramatic spin, although managed not to make contact with barriers or other cars on his way across the track at turn five.

Ferrari looked quick during the early part of the session but slipped down the order towards the end. Carlos Sainz Jnr set his best time in the final quarter of an hour of the session, when drivers committed to their last performance runs. He split the Red Bulls times, initially going fastest of all until Perez was able to reclaim the spot.

Having lagged behind his team mate early as McLaren had looked somewhat adrift of Ferrari, Lando Norris had a very strong final run. Norris was the only one of the two McLaren drivers to beat the Mercedes pair, Ricciardo ending up seventh-fastest.

Pierre Gasly had another frustrating session, off the pace until the final runs but the AlphaTauri driver was still able to beat one Ferrari, Charles Leclerc finishing the session ninth. Esteban Ocon completed the top 10, team mate Fernando Alonso well off the pace in seventeenth.

Alonso faces a grid penalty after becoming the latest driver to exceed the maximum allocation of power unit parts. Alpine has renewed every element of his Renault power unit, including the exhaust. He joins Bottas, Vettel and Russell in taking power unit-related grid penalties.